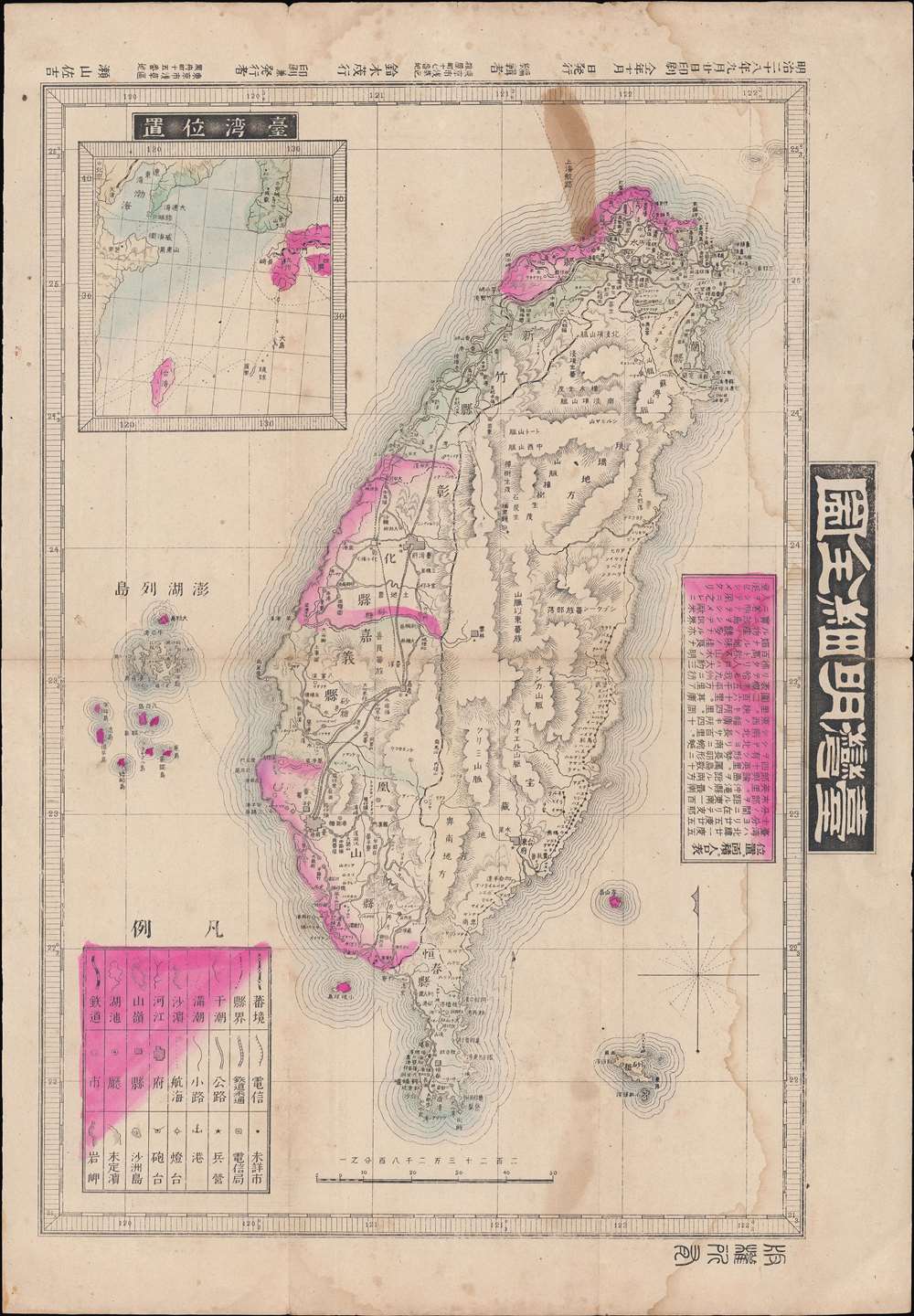 The Japanese consolidate their hold on Taiwan.
$650.00

This is a very rare 1895 Suzuki Shigeyuki Map of Taiwan, made as the Japanese military was in the process of conquering the island. Its most obvious distinguishing characteristic is that the map is meant to be rotated, Japanese style, with important information appearing both horizontally and vertically.

By the time this map was made, Japanese troops controlled most of northern and central Taiwan, and were preparing to occupy the southern part of the island. The map provides important information on the infrastructure, administration, resources, economy, and geography of Taiwan. It is particularly detailed in the naming of islands and islets near Taiwan, including the Penghyu Islands (澎湖列島), Liuqiu (小琉球島), Green Island (岑山島), and Lanyu (紅頭泻, noted for the production of sugar 砂糖). An inset at top-center includes information on the geographic position of Taiwan, its distance from the Chinese mainland and Japanese home islands (Kyushu), its population, and so on. An inset map (臺灣位置) shows Taiwan in the context of the East China Sea. The legend notes typical features such as roads, railways (complete and under construction), telegraph lines, shipping lines, and administrative borders.

The eastern half of the island south of Yilan (宜蘭縣) was primarily aboriginal territory. These areas were not totally uncharted. Mountain ranges are named, while rivers, some coastal settlements, and the names of some groups/tribes (土人部落, 蕃族部落) are given. The recently-created administrative districts of Taitung Prefecture (臺東府) and Hengchun County (恒春縣), the result of eleventh-hour attempts by the Qing to more closely control Taiwan (see ' Japan's Growing Clout in East Asia' below), are also noted.

Taiwan at the Peripheries of Empires

Due to its strategic location and proximity to the Chinese mainland, Taiwan has been eyed by foreign powers for much of the past four centuries. The island's early indigenous inhabitants had minimal interaction with Chinse culture until the Ming period, when larger numbers of traders, fishermen, settlers, and pirates operated on or along the coast facing Fujian. Europeans also appeared in the early seventeenth century, with both the Dutch and Spanish building forts on the island. However, the main power in the Taiwan Straits was prominent families of traders and officials from Fujian, especially the Zheng family, who controlled trade routes in the Straits stretching as far as Japan and Southeast Asia.

By the time of the Ming's collapse in 1644, the Zhengs had evolved their operation into a quasi-state (the Zheng Ministry 鄭部), led by the dynamic but fairly reckless Zheng Chenggong (鄭成功 1624 – 1662, known in European sources as Koxinga or Coxinga). Zheng captured the Dutch Fort Zeelandia, refused to acknowledge the Qing, and even launched an attack on Nanjing, but was driven back to Taiwan, which the Qing eventually captured in 1683. Unsure of what to do with the island, the Qing evacuated most of the Chinese population and ruled it at arm's length, but Chinese migration increased throughout the eighteenth and nineteenth centuries, and officials in Beijing viewed it as an annoyance and a sort of lawless frontier. By the time of the First Sino-Japanese War, settlers from the Chinese mainland who lived on the west side of the island far outnumbered the aboriginal population to the east. Although a border (marked as 蕃境 in the legend) had been established to separate the two communities (mainly to protect aborigines from attack and exploitation by Chinese settlers and to prevent Chinese settlers from fleeing to aboriginal areas to shirk their taxes), the boundaries between these communities were actually quite fluid.

The background to Japan's occupation of Taiwan can be dated to the Meiji Restoration (1868). Recognizing that one of the common elements among all foreign powers was colonies, the leaders of the Meiji Restoration set their eyes on building up both an informal and formal empire in East Asia. As a distant and often-ignored vassal state of the Qing, the Ryukyu Kingdom was an obvious place to begin imperial expansion. Taiwan was likewise an enticing option. Though a part of the Qing empire, the Japanese rightly determined that the Qing were not especially interested in the island. By the time the Qing court recognized the problems that foreign rule of Taiwan would cause, it was already too late.

Following the Opium Wars, and especially after the Japanese established a de facto protectorate over the Ryukyu Islands in 1872 and launched a military expedition to Taiwan in 1874, the Qing realized the vulnerabilities that would be created if Taiwan were captured by foreign powers (the French also tried to invade Taiwan in 1884). They established more direct administration of the island, eventually making it a province in 1887, and appointed a modernizer, Liu Mingchuan (劉銘傳), as governor. Liu oversaw the construction of schools, fortifications, and a railway, completed in 1893, seen here connecting Keelung (基隆), Taipei (臺北), and Hsinchu (新竹). It was planned to continue to Taiwan-fu (台灣府 that is, Taichung) and Tainan, but was not completed before Liu had to leave Taiwan for health reasons.

Japanese forces invaded Taiwan in May 1895, after it was ceded to them by Treaty of Shimonoseki (April 17, 1895) at the end of the First Sino-Japanese War (1894 - 1895). The occupation of Taiwan fit into Imperial Japan's Nanshin-ron (南進論) or Southern Expansion Doctrine, which argued that Taiwan, Southeast Asia, and the Philippines were essential to Japan's economic and territorial growth. Katsura Taro (1847 - 1913), a Yamaguchi Samurai, wrote of Taiwan's significance, 'It is not only the most ideal location for expanding power to southern China, but also the islands in Southeast Asia.' Although there were some indigenous attempts at resistance and self-governance, including the founding of the 'Republic of Formosa,' arguably Asia's first republic, the Japanese were quickly able to suppress organized opposition, though guerilla warfare would continue for several years. In less than six months, Japanese forces achieved, with the arguable exception of the tribal central highlands, full control of the island. Taiwan was Japan's first major extraterritorial holding, and Imperial Japan worked diligently transform it into showpiece 'model colony.' Japan lavished resources on the island's economy, including public works, industrial development, and cultural Japanization.

Stylistically, this map represents the height of the Meiji-era (1868 - 1912) cartographic tradition - wherein western style cartographic standards, lithographic printing, and imported inks, were combined with Ukiyo-e color traditions and aesthetic values. This map falls into a cartographic lineage that begins with the Meiji Restoration in 1868 and continued through about 1895. Here, the boldly bright palette likely associates this map with aka-e (赤絵; 'red pictures'), illustrations in vivid color achieved through imported German-made inks. Such maps began to fall out of fashion near the turn of the century, when they were supplanted by more reserved printed color.

This map was printed on September 20, 1895 and distributed the following month (no exact date given). It was edited by Suzuki Shigeyuki (鈴木茂行), and printed and distributed by Seyama Sakichi (瀬山佐吉), both based in Tokyo. This map is not known in any institutional holdings and is very scarce to the market. Several similarly titled maps are held by the National Museum of Taiwan History and the National Diet Library, including one edited by Suzuki, also from 1895, titled New Complete and Detailed Map of Taiwan (新撰臺灣明細全圖, despite the title actually published before this map), but the printer, distributor, and content are different. Other similar yet distinct maps are titled Complete and Detailed Survey Map of Taiwan (臺灣實測明細全圖), Detailed Map of Qing Taiwan (清國臺灣島明細地圖), and Detailed Map of Taiwan Island (臺灣島明細之地圖), all published 1895. As a group, these maps reflect the Japanese publishing industry's rapid response to public and official interest about Japan's new colonial possession.


Seyama Sakichi (瀬山佐吉; fl. c. 1886 - 1900) was a Meiji era publisher based in Tokyo who published vividly illustrated books reflecting the changing social and cultural conditions of the era, including works on sexual relations and reproduction, transportation, and Western magic tricks (手品), but also on Japanese traditions, such as a series of books on Geisha. Seyama also published some of his own works in these fields. Learn More...

Good. Soiling present along right side and top of map. Wear along fold lines. Slight loss at intersections of fold lines.