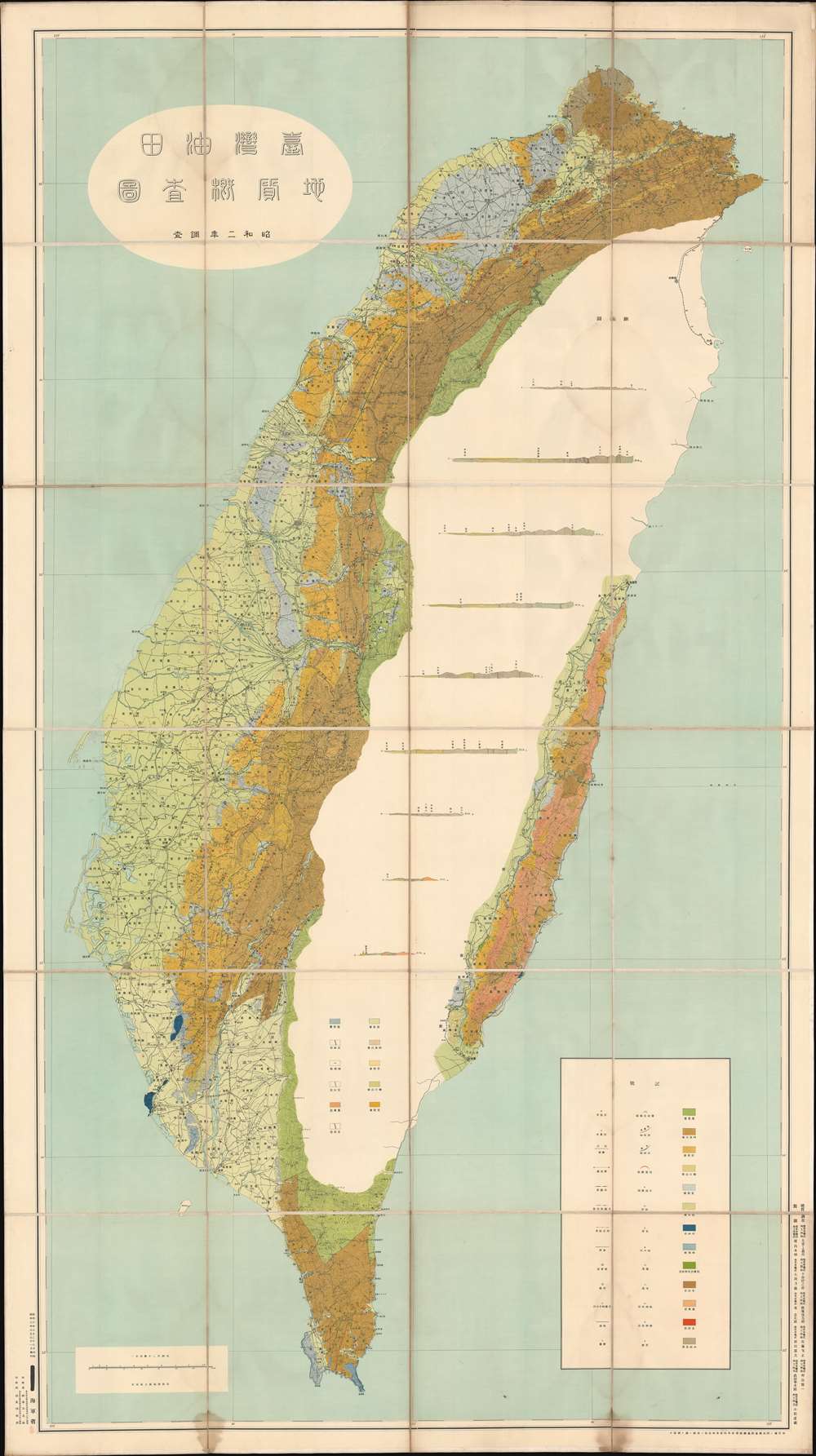 This is a 1928 or Showa 3 geological map of Taiwan / Formosa. Made during the Japanese Occupation, this is the largest single-issue map of Taiwan published before World War II. Part of what made Taiwan appealing to Imperial Japan was its rich natural resources, particularly oil. Once Imperial Japan was able to fully occupy the island, they wasted no time in commissioning the Imperial Navy and top geologists to complete an extensive geological survey, resulting in this map, as preamble for developing and extracting the island's mineral resources. Nonetheless, the large white area occupying the vast inland Central Mountain Range underscores how, in 1928, there was still a lot of survey work to be done. A key in the lower right corner provides an explanation of the thirteen different colors employed to differentiate between the mineral resources and geological formations indicated.

This map is little known outside of Taiwan academic circles and remains restricted material in both Taiwanese and Japanese collections. Quoting from a 1957 Bank of Taiwan report,

In 1928, the Geological Survey Map of Taiwan Oilfield and its report version of the Japan Geological Survey, Yoshiki Ojing, etc. , made an epoch-making contribution to the compilation of Taiwan geological maps and stratigraphic sequences, and an increase in classification.

As a result, the 'Survey Report' was published in 1927, accompanied by a 1/200,000 geological survey map of the Taiwan Oilfield . This map is not only a great contribution to the oil field geology of Taiwan, it is also of great value to the geology of Taiwan itself; unfortunately, it has not been publicly published, and few people know it from outside.

There is a stamp in the lower left corner that resembles other 'restricted' designations, but the characters are unclear and lack definitive meaning.

Japan occupied Taiwan from 1895 to 1945. Japanese forces invaded Taiwan in May of 1895, after it was ceded to them by Treaty of Shimonoseki (April 17, 1895) at the end of the First Sino-Japanese War (1894 - 1895). The occupation of Taiwan fit into Imperial Japan's Nanshin-ron (南進論) or Southern Expansion Doctrine, which argued that Taiwan, Southeast Asia, and the Philippines were essential to Japan's economic and territorial growth. Katsura Taro (1747 - 1913), a Yamaguchi Samurai, wrote of Taiwan's significance, 'It is not only the most ideal location for expanding power to southern China, but also the islands I Southeast Asia.' Although there were some indigenous attempts at resistance and self-governance, including the founding of the 'Republic of Formosa', Asia's first republic, the Japanese were quickly able to suppress Formosan forces. In less than 6 months Japanese naval forces achieved, with the arguable exception of the tribal central highlands, full control of the island. Taiwan was Japan's first major extraterritorial holding, and Imperial Japan worked diligently transform it into showpiece 'model colony.' Japan lavished resources on the island's economy, including public works, industrial development, and cultural Japanization. After an initial period of unrest, the Japanese were generally effective in Taiwan, where they were, for the most part, approved of by the Taiwanese, who appreciated the advanced technology and economic growth. Of course, the darker side of Imperial Japanese investment in Taiwan was its planned essential role in supporting Japanese military aggression in the Asia-Pacific.

This map was printed by the Japanese Navy on March 28, Showa 3, 1928 and issued on March 31st of the same year. It was printed by Gentaro Senba (仙葉元太郎) of the Senba Printing Office (仙葉印刷所). This map is scarce, largely because it was not publicly distributed and available for only internal official use. We are aware of only 2 other examples one in Japan, at the Kyoto University Comprehensive Museum Collection, and another in Taiwan, at the National Taiwan University Library. Outside of Asia, we have noted an example at the University of Chicago.

Very good. Soiling apparent most on verso. Blank on verso. The map is dissected and laid on linen - uncommon in Japanese maps of the period, and indicative that it may have at some point passed through a European collection.