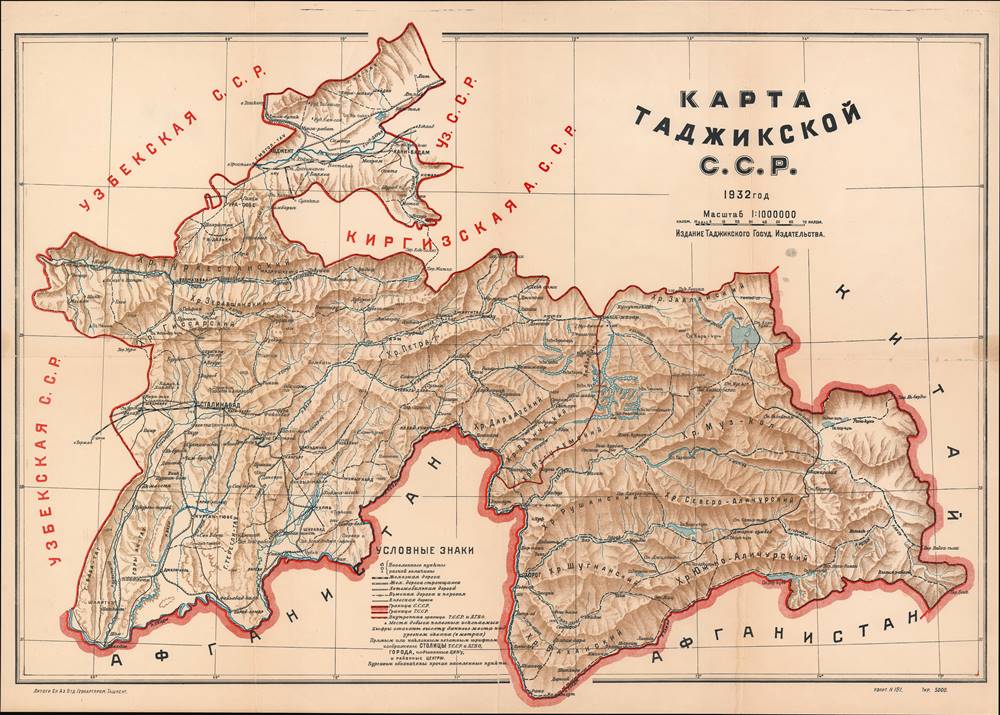 This is a unique 1932 map of Tajikistan made by Geokartprom and published by the Tajik State Publishing House - the first official map of the Tajik S.S.R. It shows the recently-formed Soviet Socialist Republic (SSR) and reflects the efforts of the Soviet Union to build political and economic infrastructure in Central Asia while also 'delimiting' the complex ethnic groups of the region.

This map covers the territory of the Tajik SSR just three years after its creation. The legend includes symbols for cities and towns, railways, roads, and the typography that indicates administrative divisions. The names of neighboring countries are shown along the borders of the Tajik SSR, including Afghanistan to the south, China to the east, the Uzbek SSR to the west, and the Kyrgyz SSR to the north.

At left-center is 'Stalinabad' (Сталинабад), capital of the SSR, known previously as Dushanbe, when it had been the last bastion and capital of the Emirate of Bukhara. Though nearly depopulated in the early 1920s, Dushanbe was chosen as the capital by the Soviets because in normal times it had been a market town frequented by local herders. Under Soviet rule, the city rapidly developed, with electricity, railways, an airport, and more being built in the mid-late 1920s. Having been thoroughly transformed and built up as a 'model socialist city,' Dushanbe was renamed Stalinabad in 1929 (the next largest city, Khujand, here as Ходжент, was renamed Leninabad in 1936).

The area on this map roughly corresponding to present-day Tajikistan was conquered by the Red Army in 1922 - 1925. A Tajik 'autonomous republic' was created within a much larger much larger Uzbek SSR but was broken off as a separate SSR in 1929. The Soviets inherited several problems in Central Asia from their Tsarist predecessors. For one, in an effort to decentralize dissent, the Russian Empire attempted inscribe ethnic divisions on a very complex cultural landscape in Central Asia, a process of ethnogenesis that would have destructive consequences decades later. The Soviets were sensitive to the ills of Russian colonialism but were not eager to relinquish the territory of the Russian Empire, and therefore pursued policies to respect local cultures (expanding literacy and publishing in Central Asian languages, for example), which only deepened these contrived ethnic distinctions.

Moreover, Islamic modernizing reformers known as Jadids emerged in the late 19th century seeking to reinvigorate Turkic identity against Russian colonialism. This intellectual movement inspired political uprisings during World War I and the Russian Revolution led by resistance fighters known as Basmachis; it was these against whom the Soviets fought in the early 1920s. Combining cultural concessions on issues like Sharia with intense military force, the Soviets eventually subdued the region and instituted korenizatsiya ('indigenization') policies to cultivate an indigenous cadre of apparatchiks (Communist official). The Soviets launched a modernization drive that reshaped the region and brought many benefits in terms of infrastructure, education, health, and women's rights, but also horrific disasters, such as the destruction of traditional Islamic culture, forced population transfers, and the Kazakh Famine of 1930 - 1933.

At the time this map was made, the borders of the Central Asian SSRs were still in flux and additional adjustments were made throughout Stalin era, resulting in several ethnic enclaves (or exclaves) entirely within another country. For example, Vorukh (Ворух, here as Варух) is shown here as connected to the rest of Tajikistan via Konibodom (Конибодом, here using the Russian spelling Кани-бадам), but border realignments in the following decades led to it being surrounded by Kyrgyzstan. These enclaves were not so troublesome in Soviet times, when the Communist Party could mediate and suppress disputes, but with the collapse of the Soviet Union became sore spots in relations between the newly independent states of Central Asia. Even today, large portions of the borders between countries are not clearly demarcated and these territorial disputes have led to violence, both at the state and the popular level. In April–May 2021, clashes along the Tajikistan-Kyrgyzstan border near Vorukh killed several dozen people and further clashes in early 2022 threatened to reignite the violence.

This map was lithographed in 1932 by Geokartprom (геокартпром) in Tashkent and published by the Tajik State Publishing House (here as таджикского госуд издательства). It appears to be the second edition of a 1929 map of the Tajik S.S.R. with the same title, the first officially published map of the new state. Neither edition is known to exist in any institutional holdings or have any known history on the market.

Geokartprom (геокартпром; c. 1925 - 1933) was a trust created by the Soviet Union in 1925 to centralize cartography in the new state. It was placed under the Military Topographic Directorate (Военно-топографическое управление) of the General Staff of the Red Army. Geokartprom rapidly undertook a project to produce detailed maps not only of the Soviet Union but the entire world. Learn More...