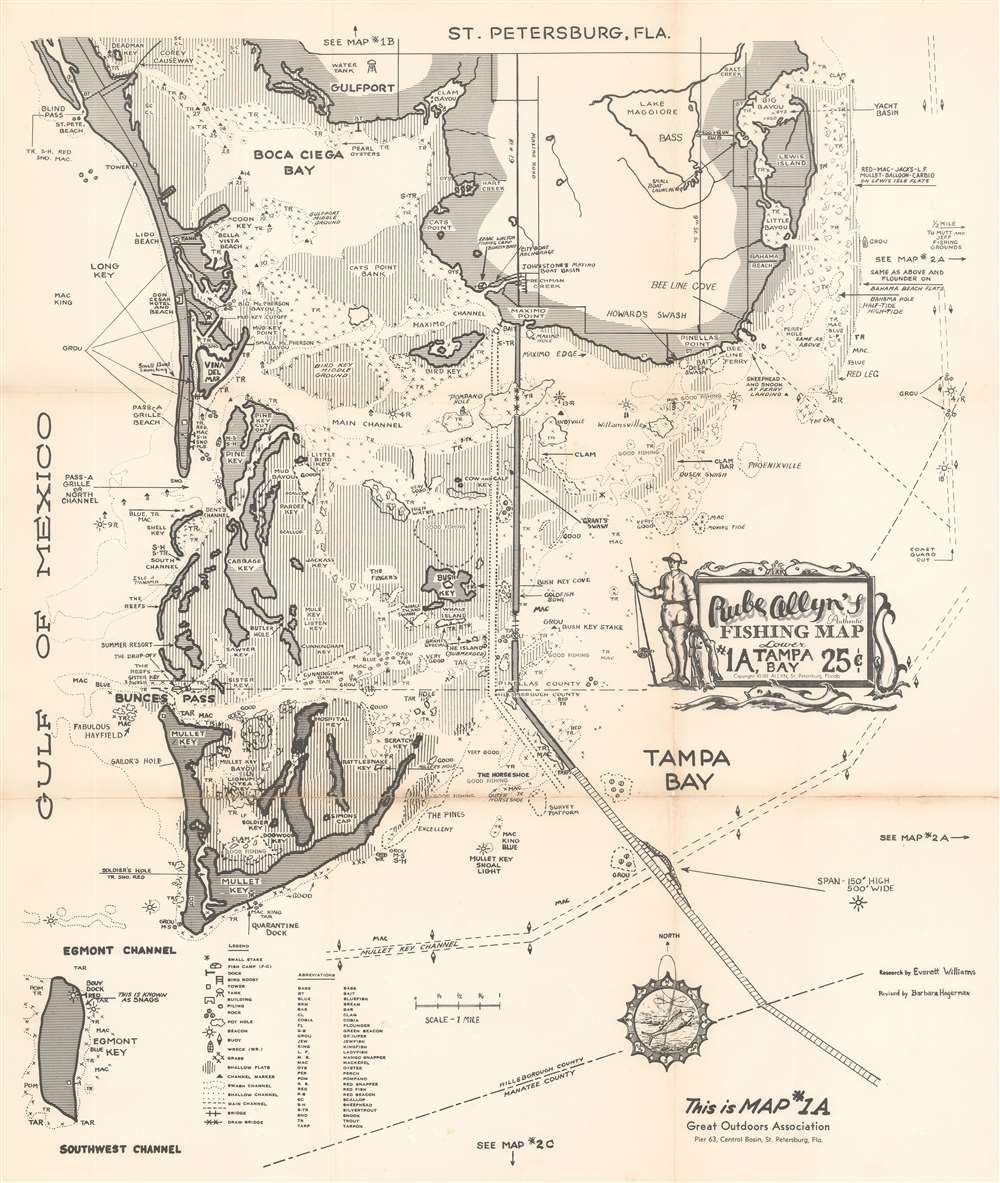 A most interesting map, this is Rube Allyn's fishing map of southern Tampa Bay. The map depicts from Mullet Key to Gulfport and Boca Ciega Bay. It is detailed with a wealth of information valuable to the fisherman. It points out where certain fish can be found, provides basic depths, and offers interesting colloquial names for offshore locations. This map is part of a series produced by Allyn in the late 1950s and early 1960. The present map is sheet 1A, the other sheets in the set include 1B, 2A, and 3C - all of which are cataloged in the Touchton Collection at the Tampa Bay History Center.

This map was issued around 1960. The present example is the second edition, featuring updates by Everett Williams and Barbara Hagerman. Scarce.

Rupert Royce 'Rube' Allyn (July 6, 1902 - July 13, 1968) was a Florida-based journalist, outdoorsman, and publisher. Allyn's father, William James 'Rube' Allyn (1866 - 1947), a Canadian-Irish 'snowbird', was a Florida legend. He arrived in Sarasota a humorist and a vaudevillian, turned into a local celebrity and newspaperman, was accused but never tried of murdering his long-time rival Harry Higel, three-term mayor of Sarasota, and died a Florida hermit. The younger 'Rube' was born in Beloit, Iowa but soon move to Sarasota with his father. The elder published The Florida Fisherman, which may have inspired the Royce 'Rube' to become a fishing journalist. He graduated from Sarasota High School then went on to a degree in journalism from the University of Minnesota. Graduating, he relocated to St. Petersburg where he worked as a printer and reporter. He was known for flamboyant prose the captured the romance and adventure of Florida offshore fishing. During the Great Depression he operated a St. Petersburg shark fishing company, but this enterprise came to an end when a 12-foot bull shark ate his tiny homemade boat (Jaws anyone?). During World War II, he served in the Navy in the submarine corps. In 1958, He founded the Great Outdoors Association, which published fishing guides, maps, and other outdoor life ephemera. Rube continued to publish unit his death. Learn More...