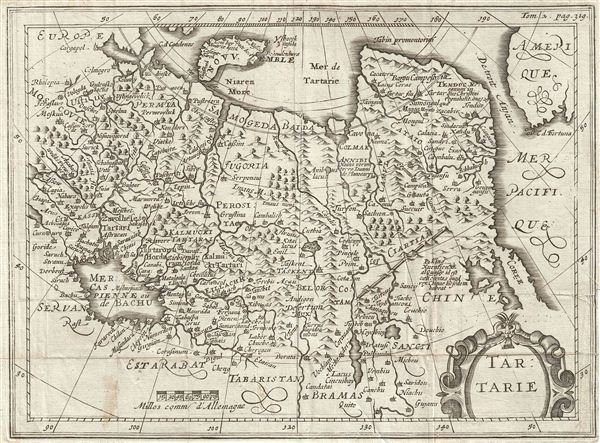 An uncommon and unusual map of Tartary issued for Martineau du Plessis in 1700. Covering from the Caspian Sea and Moscow (Moskua) eastward to Alaska, Korea, and the Pacific and from the Arctic Sea and Nova Zembla south to Tibet. Cartographically this map is most notable it's primitive treatment of the extreme northeast, with the semi-mythical Strait of Anian separating Asia from America. The Great Wall of China is stylistically rendered. Numerous cities in northeaster Asia, most associated with the writings of Marco Polo and the exploits of Ghengis Khan, are noted. So too are numerous Silk Road capitals in Central and eastern Asia, including Beijing (Peking), Tashkent (Tanchit), Fergana, Samarkand (Samarchand), Lahore and Bukhara (Buccara). Also of interest is the misorientation of the Caspian Sea, an error common to maps of the 16th and 17th though rarely the 18th century. These singular errors allow us to date the original composition of this map to the early 17th century, with possibly ascriptions to Kaerius, Du Val, or Cluver. This edition was prepared for Martineau du Plessis' Nouvelle Geographie, published in 1700.