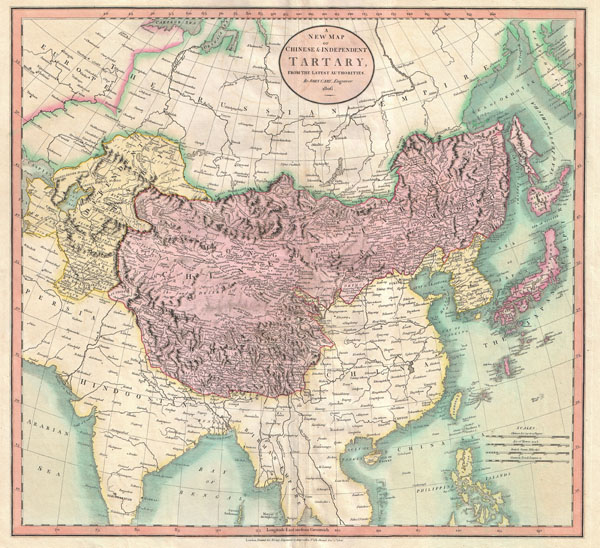 An exceptionally beautiful example of John Cary's important 1806 map of Chinese and Independent Tartary. Covers Central Asia from the Caspian Sea to Japan, extends as far north as the Obskaia Sea and as far south as India, Burma and the Philippines. Includes the modern day nations of Tibet, Uzbekistan, Kazakhstan, Turkmenistan, Kirgizstan, Tajikistan and Mongolia. One of Cary's most interesting maps. Central Asia, despite hundreds of years of passing trade on the Silk Routes, was still, at the turn of the century a largely unknown land. Cary attempts to show some of the Silk Route passages, especially to the north of the Gobi, but ultimately admits, 'The Geography of these parts is extremely obscure.' All in all, one of the most interesting and few maps of Central Asia to appear in first years of the 19th century. Prepared in 1806 by John Cary for issue in his magnificent 1808 New Universal Atlas.