1670 De Wit Map of Israel, Palestine, or the Holy Land 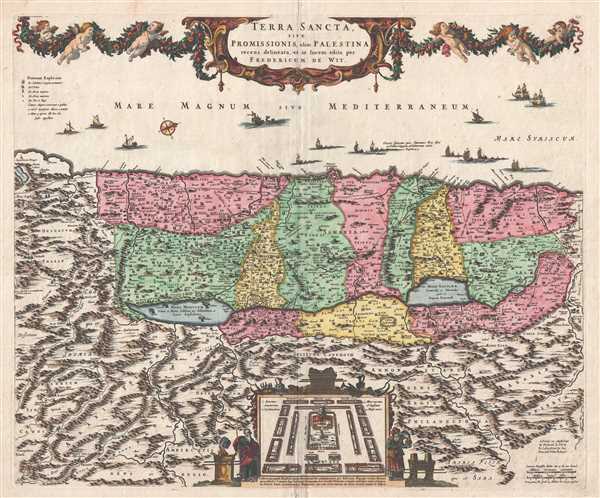 1670 De Wit Map of Israel, Palestine, or the Holy Land

Features an inset map of the Temple of Solomon.

This is a c. 1670 Frederick de Wit map of the Holy Land, Israel, or Palestine. The map depicts the region from 'Arabia' to 'Syria' and from the Mediterranean Sea to Ammon, modern day Jordan. The Holy Land itself is divided into the regions occupied by the Twelve Tribes of Israel, and each region is labeled and shaded a different color to allow for easy differentiation. Innumerable cities, towns, and other settlements are illustrated and labeled, including Jerusalem, Bethlehem, and Nazareth. Major roads are illustrated, along with rivers and lakes. The Sea of Galilee and the Dead Sea are depicted, with the four destroyed cities of Sodom, Gomorrah, Adma, and Zeboim burning in the Dead Sea. A plan of the Temple of Solomon is situated at the center of the bottom border, with the Arc of the Covenant illustrated above the plan.

This map was produced by Frederick de Wit and published c. 1670.