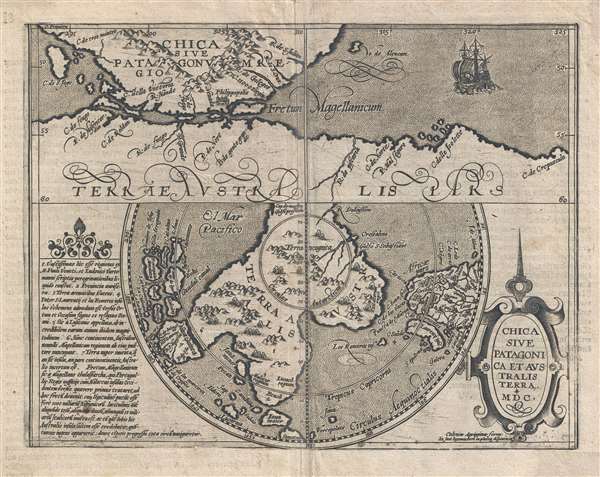 Exceptional map of the apocryphal Southern Continent of Terre Australis with text some believe suggest pre-discovery knowledge of the continent.

A scarce and interesting 1600 map of the Straits of Magellan and the southern polar regions, including the Great Southern Continent or Terre Australis, a kind of speculative precursor to the discovery of Antarctica. The map is divided into two segments. The upper map focuses on the Strait of Magellan and includes Terre Australis as a great continent south of the strait. The lower map is a southern hemisphere polar projection focused on the apocryphal continent of Terre Australis. Extensive Latin text to the left of the map describes the southern continent lying south of Nova Guinea (New Guinea), as it is illustrated here, and is believed by some to refer to Portuguese knowledge of Australia prior to its official discovery by the Dutch East India Company (VOC) mariner Willem Janszoon.

The apocryphal southern continent or Terre Australis was speculated long before the discovery of Antarctica and appears on maps issued throughout 16th, 17th, and early 18th centuries. Based upon the writings of Aristotle, it was believed that the Earth was a place of balances. Geographers thus postulated the bulk of Eurasia must be counterbalanced by a similar landmass in the Southern Hemisphere, just as, they argued, the Americas counterbalanced Africa and Europe. Many explorers in the 16th and 17th centuries sought the Great Southern continent, including Quiros, Drake, and Cook, but Antarctica itself was not truly discovered until Edward Bransfield and William Smith sighted the Antarctic Peninsula in 1820.

The southern continent as seen here, is one of the finest examples of 16th century speculative mapping of the southern polar regions and features various elements drawn from the writings of Marco Polo (Maletur, Beach, and Java Minor) and from the journeys of Ferdinand Magellan. Cartographically it predates both the voyages of Jacob Le Maire and Willem Schouten, and offers no information from the suppressed circumnavigation of Sir Francis Drake. It was thus believed, as illustrated here, that the lands to the south of the Straits of Magellan were not a collection of islands, but rather the northern extension of a great unexplored southern landmass.

The extensive Latin textual description of the Southern Continent in the lower right is of great interest, in rough translation,

…the southernmost of all countries, extends immediately toward the Polar Circle, but also towards the countries of the east beyond the Tropic of Capricorn and almost at the equator its confines are to be found, and in the east, separated by a narrow strait, it lies in front of new Guinea, but is explored only at a few coastal places, because after one and another voyage that route has been discounted and thence rarely sails are set except that ships are driven off by cyclones. It takes its beginnings two or three degrees under the equator and is assigned such an extension by some that it may well appear to be the fifth continent after having been discovered fully.

The text here provides a not wholly inaccurate description of part of Australia and it has been argued by some scholars that the wording strongly suggests Portuguese navigators may have landed on the Australian shore without either engaging extensive mapping or otherwise fully understanding the scope of the discovery. Günter Schilder in his book Australia Unveiled discusses this map at length and points to its significance to Major Collingridge and others 'as proof that Australia had already been discovered in the sixteenth century....'

The upper map, focusing on the straits of Magellan, identifies C. Della Victoria and includes an illustration of Magellan’s ship Victoria The map also names the ill-fated Spanish colony of Philippopolis founded by Magellan at the eastern entrance to the strait. Philippopolis, like the Philippines, was named after Philip, the Prince of Asturias (1527–1598), later Philip II of Spain.

This map is based on an early 1597 map by Cornelius Wytfliet. It was engraved by Matthais Quad and published by Johann Bussemacher in Cologne.

Matthias Quad (1557 - October 29, 1613) was Dutch engraver active in Cologne during the late 16th and early 17th centuries. Quad was born in the Netherlands and studied engraving under Johannes van Deutecum (fl. 1552 - 1606) of Deventer and Hendrick Goltzius (1558-1616) of Haarlem. Around 1580 he relocated to Heidelberg or Cologne where he primarily engraved geographical texts in conjunction with fellow publisher Johann Bussemacher. In 1608 he published an atlas, Fasciculus Geographicus, with Bussemacher in Cologne. In 1609, another major work, his Teutscher Nation Herligkeit, a historico-cultural regional study of Germany, was published by Wilhelm Lutzenkirchen .


Johann Bussemacher (fl. c. 1580 - 1613) was a German publisher, engraver, art dealer, and bookseller active in Cologne in the late 16th and early 17th centuries. He was trained as a copper engraver in Dusseldorf, where he was born. Around in 1583 he established his own imprint and a publishing concern in Cologne. Bussemacher was for a time the largest and most successful publisher in Cologne. He is commonly associated with producing engraved images of saints and noble personages, but he also issued several maps in conjunction with Matthias Quad.