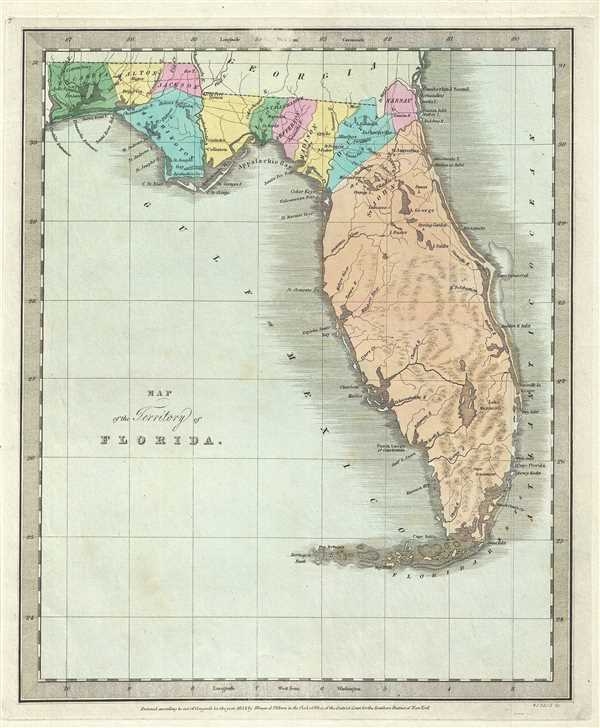 Map of Florida shortly after its annexation showing early county structure. Names the 'Cape Florida Settlement' or what would eventually become Miami.

This is an unusual 1834 first edition map of Florida issued by David H. Burr. It depicts territorial Florida just a few years after the region was annexed by the United States. Color-coding defines Florida’s early county development with the north divided into ten counties while St. John County occupies the entire peninsular region. The map identifies Lake Mayacoo – an early name for Lake Okeechobee following from the Mayaca People, an indigenous tribe occupying the upper St. John's River valley. Tampa Bay is identified by its earlier Spanish name, Espirito Santo. The 'Cape Florida Settlement,' a Bahamian immigrant village that would eventually evolve into Miami, is noted on the unnamed Miami River.

This map further details this region on the cusp of the bloody Second Seminole War. The United States acquired Florida from Spain via the 1821 Adams-Onis Treaty. Following the treaty wealthy planter immigrants were encouraged to move to the new territory, in theory developing the region. The consequent establishment of a slave owing plantation culture in Florida the effect of both encroaching on lands grated to the Seminole Nation by the Treaty of Moultrie Creek and increasing the number of runaway slaves seeking refuge with the Seminoles. The resulting conflicts lead to a series of bloody clashes that culminated in the Second Seminole War, 1834 -1842.