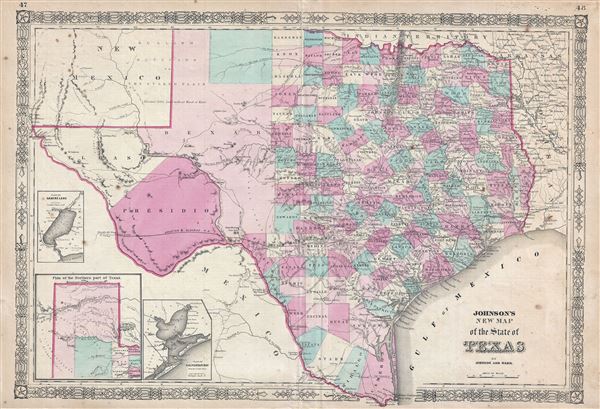 This is an exceptional example of Johnson and Ward's highly desirable 1864 map of Texas. Created during the American Civil War, this extraordinary folio map details the state of Texas in full. Identifies the elevated Table Lands, el Llando estadado (the Staked Plain), the U.S. Mail Route, numerous geographical notations and color coding according to county. El Paso, Presidio and Behar counties are gigantic and occupy much of the western portion of the state. Insets in the lower left quadrant detail Sabine Lake (with depth soundings), Galveston Bay (from the U.S.C.S.), and the northern panhandle. Throughout, Johnson identifies various cities, towns, rivers and assortment of additional topographical details. It features the fretwork style border common to Johnson's atlas work from 1864 to 1869 and is based on a smaller 1855 map by J. H. Colton. Johnson issued this map in a total of eight states with only minor variations - the present example being the fifth state. Published by A. J. Johnson and Ward as plate nos. 47 and 48 in the 1864 edition of Johnson's New Illustrated Family Atlas. This is the last edition of the Johnson Atlas to be attributed to Johnson and Ward, subsequently all editions were published exclusively under Johnson's imprint.