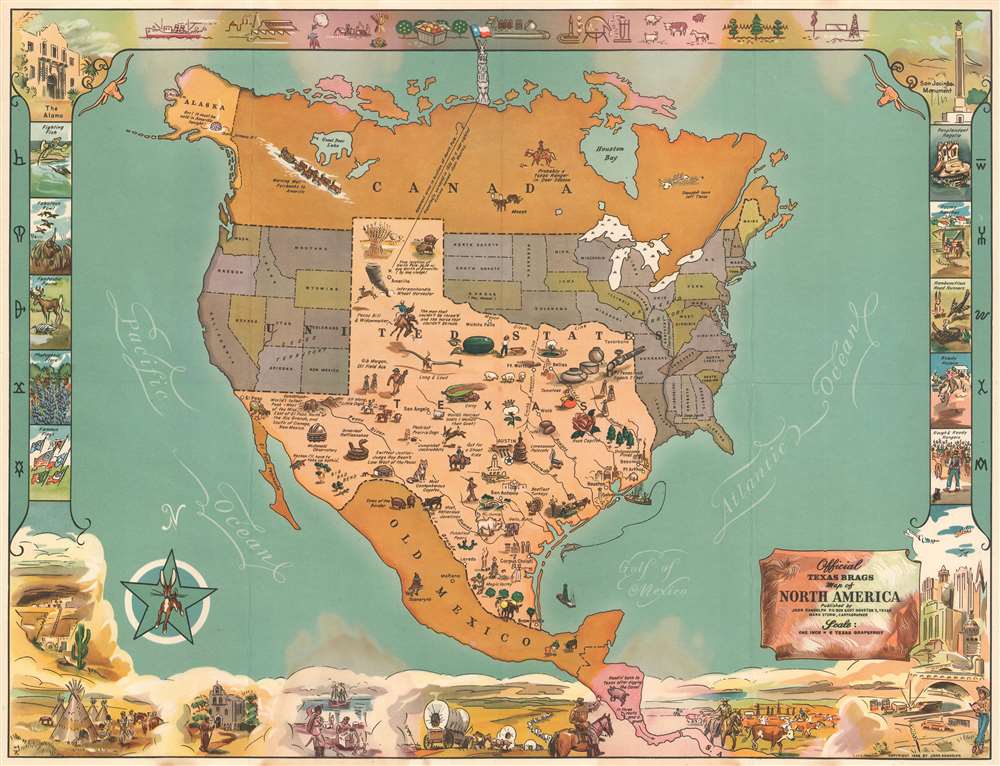 Puts the North Pole in northern Texas and the morning mail travels by dogsled from Fairbanks to Amarillo.

Meese and Other Comical Animal References

Storm makes abundant use of puns and plays with the English language. 'Meese' appear in Canada, which elicited the best laugh around the office. 'Sows of the Border' rut in 'Old Mexico,' and a pig heads back to Texas 'after digging the Canal in three roots and a grunt.' One of the best features of Storm's work is the incredibly comical references to the superiority of Texas's wildlife and livestock. Per the map, Texas is home to the 'peskiest prairie dogs,' 'jumpin'est jackrabbits,' 'most cantankerous coyotes,' 'orneriest rattlesnakes,' 'beefiest turkeys,' and the 'world's hairiest goats (mohair than goat).'

In line with its outsize importance on this map, Texas's geography spreads throughout the state. The cities and towns are where they should be within the state, just much farther north. Amarillo, for instance, is just to the east of Wyoming. The 'true' North Pole marked as being approximately 36.04 miles north of Amarillo, and a line marks the 'apparent error in location of North Pole.' The Alamo identifies San Antonio, the capital building represents Austin, and the Cotton Bowl, the venerated stadium, highlights Dallas.

John Hayward Randolph (1908 - 1972) was an American artist and author best known for the 'Texas Brags' series of books, published between 1944 and 1972. Before World War II, Randolph was in advertising. He joined the 124th Cavalry , a unit of the Texas National Guard, in 1942. The unit was soon federalized and became the last unit in the United States Army to be mounted on horses and mules. Originally posted at Fort D. A. Russell during the winter if 1943-44 near Marfa, Texas, Rudolph was bored out of his mind guarding the Mexican border, according to his wife. While in Marfa, Randolph began thinking about an advertising campaign he had worked on before the war for Jax beer that was called 'Texas Brags and Drinks Jax Beer'. He soon wrote his wife and asked her to send him his files from that campaign and began working on the manuscript for the first edition of Texas Brags while not on duty for four months. He sent the finished manuscript to his wife just before his unit was transferred to Fort Riley, Kansas in preparation for deployment to India to clear the Japanese from the Burma Road. Before leaving, Randolph arranged for his friend Mark Storm to illustrate the manuscript and for the finished product to be published by the Anson Jones Press. Once he got back to the United States in 1945, 160,000 copies had sold. Learn More...


Mark Kennedy Storm (September 4, 1911 - October 4, 2002) was an American painter and sculptor renowned for his work focusing on the American west and cowboy heritage. Born in Valdez, Alaska, Storm's family moved frequently during his childhood. They left Alaska for Oregon, and the went from Oregon to the Sierra Madre Mountains in Mexico. After his father completed the mining project he was working on in Mexico, the family moved to New Mexico and bought a 150-acre ranching the heart of what became the Ruidoso resort area. Near Glencoe, the Store family ranch is in the vicinity of the Mescalero Apache Reservation. The family soon found success breeding and raising fine horses and also cattle. The boys, Mark and his brothers, spent their days as ranch hands. They build fences, tended to the horses and cattle, worked on their roping and branding skills, built fences, and repaired corrals, along with a multitude of other chores. Storm gained valuable experience around horses during his time working the family ranch, which laid the foundation for his life's work of sketching, drawing, and painting horses. He won the bronc riding event at the 1933 July 4th rodeo in Fort Stanton, New Mexico, an achievement he was proud of for the rest of his life. At some point the family moved to Austin to enroll the boys at the University of Texas, but they never sold the ranch and always considered it to be home. While a student at the University of Texas, Storm majored in art and architecture. He did not remain a student for long, however, because he fell in love with a coed from Houston name Ferne Sweeney. The couple soon married and moved to Houston, where Storm found a job as a graphic artist working for the oil industry. Storm made a name for himself was one of the designers of Humble Oil and Refining Company's display at the 1936 Texas Centennial Celebration. After the success of his work at the celebration, Humble Oil brought Storm back frequently to design advertising materials, as well as covers for their magazine The Humble Way, which Humble widely distributed as reprints. Mark was hired as a commercial artist by Wetmore Printing Company at some point in the 1930s or 1940s, which produced his work as silkscreen as well as letterpress prints. Some of his most recognizable work are the covers he produced for the souvenir programs for the Houston Livestock Show and Rodeo. Storm's first cover appeared in 1975 and was a painting of the winner of the 1974 Houston Saddle Bronc finals and the 1974 RCA Saddle Bronc Champion. This cover proved to be so popular, that an original Storm painting graced the program's cover for the next twenty-four years. The cover of the 2000 education was dedicated in his honor. Learn More...