1842 S.D.U.K. Map of the Republic of Texas (at fullest) and California 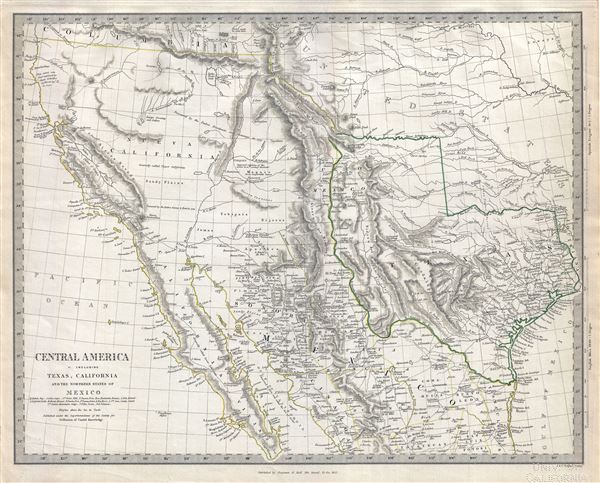 1842 S.D.U.K. Map of the Republic of Texas (at fullest) and California

Most widely distributed European map detailing the Republic of Texas.

A fine example of the uncommon 1842 Society for the Diffusion of Useful Knowledge, or S.D.U.K., map of the pre-Annexation Republic of Texas (1836 - 1846) and Upper California (California Alto). Illustrating Texas at its largest, this map extends from Point St. George, the Snake River, and Mount Shasta, south as far as Cabo San Lucas (Baja California) and San Luis Potosi. It extends eastwards as far as Lake Sabine and the Louisiana/Texas boundary of 1819. This map covers the modern day states of Texas, California, Nevada, Utah, Wyoming, Arizona, New Mexico, Colorado, Kansas, Oklahoma, and Nebraska.

Although this map covers a vast area, all of the American southwest, the focus is clearly the nascent Republic of Texas, here in its final year as an independent republic before being annexed into the United States. Texas is presented in its largest iteration show the full extent of the Republic of Texas Claims, with a stovepipe handle extending nearly as far as Cheyanne, Wyoming, and a western border occupying much of modern day New Mexico and Colorado.

The whole is full of idiosyncratic annotations and commentary referencing legends and explorations. For example a note on the California coast notes 'This Coast was first explored by Juan Cobrillos as far as 44° N. in 1542.' In modern day Colorado there is a note that reads 'moquis have comfortable houses and 'Supposed residence of the Aztecs in 12th century,' referencing the historical and cartographic speculations of the German nobleman and polymath Alexander von Humboldt. In modern day Arizona a note reads, 'Traversed by the Padres Garces and Fonte in 1775,' referencing the Anza Expedition. Where Salt Lake City is today, only the 'American Fur Depot' is noted.

In California tow large lakes appear in the San Joaquin Valley identified as the Lakes of Tule. The southernmost like, called Lake Tulare, dried up in the 1930s when irrigation re-routed its waters supply. Today it makes occasional reappearances when heavy rains soak the Sierra Nevada Mountains. The northernmost lake appears to be entirely speculative and may never have existed. Nonetheless, they were very much a part of the mythos of California even in the 1880 when, Robert Greenhow, writing his History of Oregon and California describes them this

… the Large Lakes of Tule, situated farther south. Of these lakes very little is known; they are said to be two or three in number, forming a chain about one hundred miles long, in the environs of which, is a large population of Natives.

This is an important map for any serious southwest collection being, as it was, the most widely disseminated map of the American southwest issued in Europe during the Republic of Texas era. This map is copyrighted 1842, but was issued on Volume two of Chapman and Hall's 1844 edition of Maps of the Society for the Diffusion of Useful Knowledge. It was engraved by John Walker of J. and C. Walker.

Very good. Bears University off California Library Stamp, from which it was deaccessioned, in margin. Blank on verso.