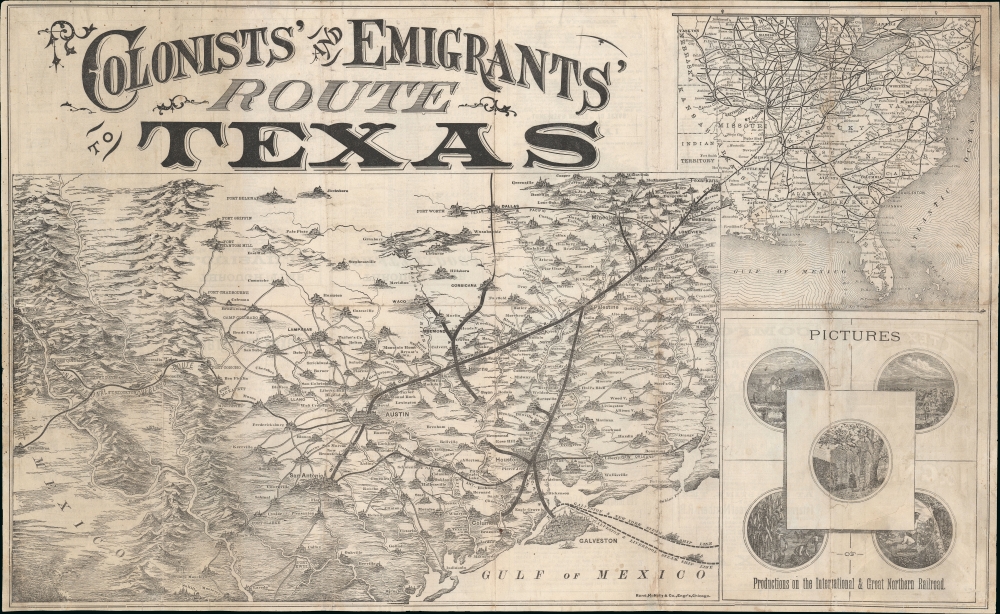 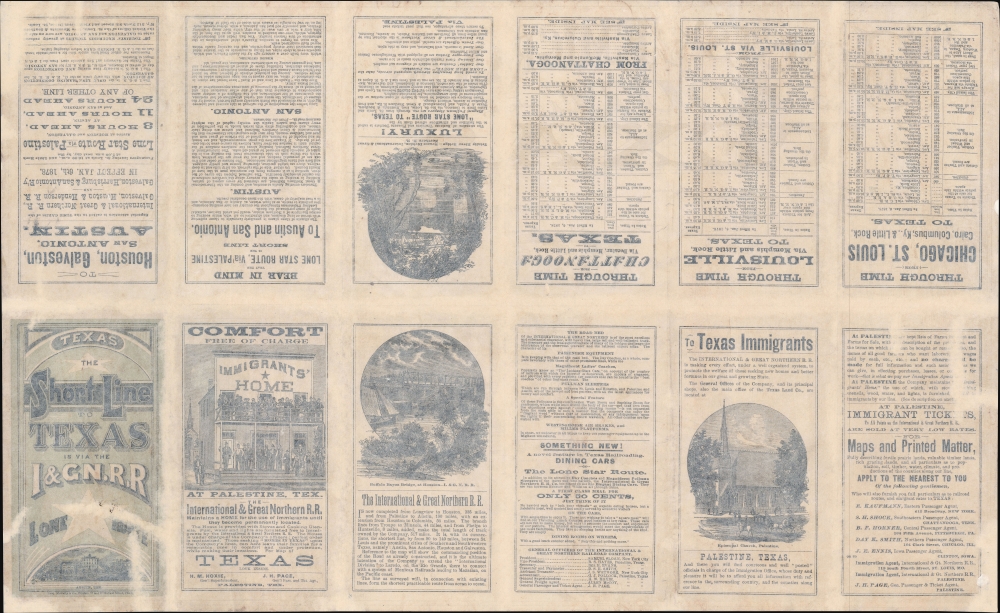 A significant and striking 1877 Rand McNally pictorial map of Texas drawn to promote emigration via the International - Great Northern Railroad (IGNRR). The map follows in the wake of the post-Civil War Reconstruction Era (1863 - Mar 31, 1877). Centered on Austin, extends from Chihuahua, Mexico to Texarkana and from Fort Belcamp to Laredo. Villages and cities are illustrated pictorially with a distinctly European flair, complete the hill-like construction and church steeples. Heavy black lines emphasize the routes offered by the IGNRR. In the upper right a general map illustrates connections to other rail lines throughout the eastern United States. Pictures in the lower right illustrate the agricultural bounty of Texas. On the verso individual panes provide timetables, promotions for the railroad, and enticements to immigrants.

Texas was hit hard by the Civil War wherein its infrastructure, particularly its fledgling railroads, were either stunted or altogether destroyed. Moreover, the Texan economy, heavily dependent upon plantation culture and slave labor, was devastated. What it did have was an excess of free land. The Texas legislature realized that they could leverage their greatest asset - real estate - to entice both railroad development and emigration. In 1869 Texas amended its constitution to provide extensive railroad grants from public lands. The IGNRR received over 3,000,000 acres.

IGNRR was founded in September of 1873 when the 'International Railroad' and the 'Houston and Great Northern Railroad' merged. The IGNRR was based in Palestine - here greatly exaggerated in size - and controlled roughly 1,106 miles of track throughout Texas - with connections to the International Overland Route from Austin to Chihuahua. As part of their mandate the IGNRR did much to encourage emigration to Texas, offered free or low-cost land, and even ran an 'Immigrant's Home' (pictured on verso) in Palestine that acted as a sort of half-way house until emigrants could find a more permanent home.

This map was issued by Rand McNally and Company on behalf of the IGNRR. The verso bears a date of 1878, but it was more likely printed in 1877. Rare. The Texas General Land Office issued an interesting article about the map and offers reproductions for sale - which have found their way into multiple institutions, but originals, as here, are extremely rare. We note examples at the University of Texas Arlington and the Library of Congress.