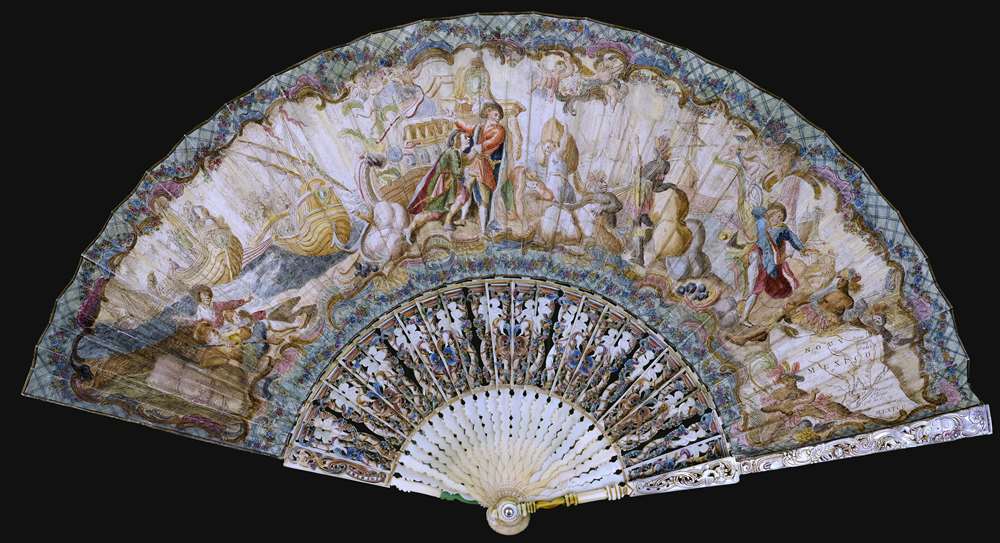 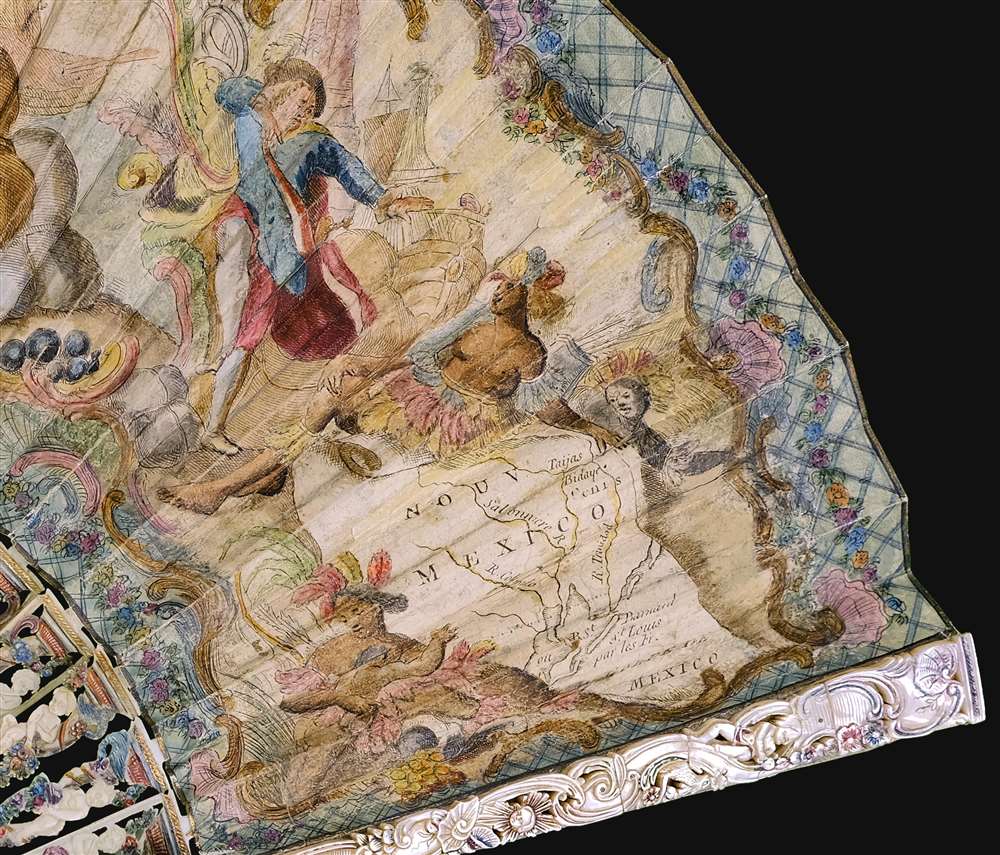 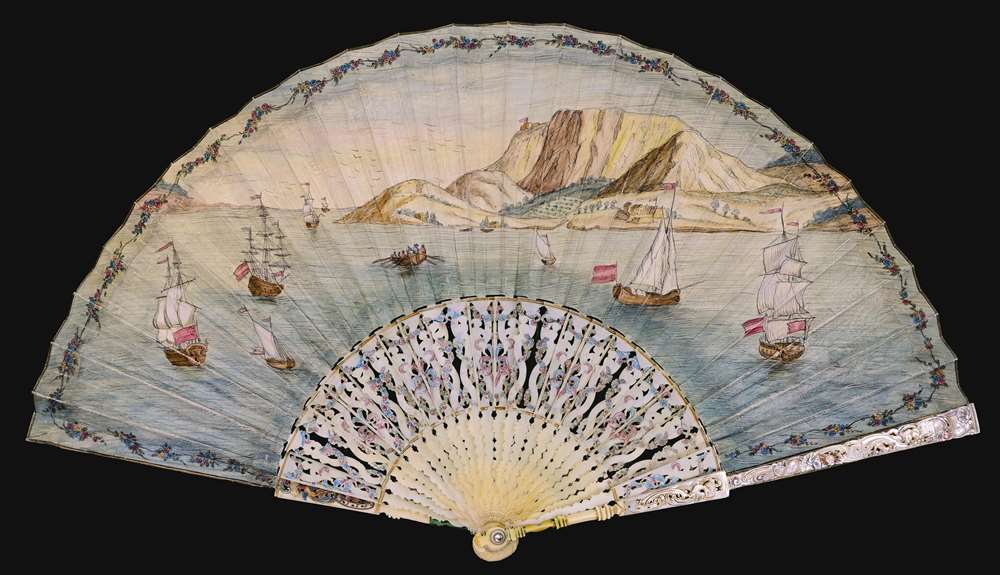 A remarkable c. 1750 Texas cartifact, this is a French hand-held fan, printed and hand colored on both sides, with one side bearing a map of Texas and illustrations celebrating the La Salle Expedition. The fan is a highly decorative and stylized chronology of the René Robert Cavalier, Sieur de La Salle (1643 - 1687) led French attempt to colonize Texas. It is a striking example of the fanciful representation that went into many depictions of European colonial enterprises, regardless of the facts.

The map-side of the fan features a dramatic scene that can be divided into three chronologically ordered segments. The leftmost scene depicts the voyage setting out from La Rochelle, with European settlers boarding ships ready to sail. In the foreground recumbent figures watch the proceedings. The middle segment details the arrival of the expedition in the New World. Passengers have disembarked and trading with indigenous American peoples (represented in a highly styled manner) has ensued. The large bales being loaded and unloaded suggest furs. The third segment, at the far right, is of the greatest interest to us. It features a small but interesting map of 'Nouv Mexico' covering the Gulf Coast of modern-day Texas, where La Salle established his short-lived colony.

The map covers the modern-day Texas Gulf Coast in the vicinity of Matagorda Bay where Robert Cavelier, Sieur de La Salle, established his 1685 colony, Fort St. Louis. It extends inland to include lands of the Cenis (Hasinai Confederacy), where the Franciscan 'mission 'Teÿas', after which the name 'Texas' was derived ('tejas' is the Hasinai word for 'friend'), is named. This mission, formally 'San Francisco de los Tejas', was established in 1690 by the Spanish nobleman Alonso de León 'El Mozo' (c. 1639 - 1691) and Franciscan priest Damián Massanet in a direct rebuttal to La Salle's colonizing efforts. By that time, La Salle himself was dead, Fort St. Louis destroyed by a Karankawa attack in 1689, and further demolished a few months later by León.

Cartographically, the map is loosely derived from the 1718 Guillaume De L'Isle map, Carte de la Louisiane, widely considered the first map to name 'Texas' (Teÿas). Between the two maps, there is a clear overlapping nomenclature, with all of the placenames appearing on the fan also present on the De L'Isle map, including the Colorado River, Cenis, Teÿas, Sabonniere R, Trinidad R, Bidaye (Bidai, a tribe of Atakapa Indians first recorded in 1691), and the 'B. St. Barnard out St. Louis'. Nonetheless, the geographical presentation, particularly the river networks, is here very different. These differences could perhaps be attributed to more interpretative work on a decorative object, but could also suggest the engraver was drawing on another unknown source.

The View on the Verso

The back of the fan features an idyllic image of colonization. Multiple sailing ships of various sizes ply calm waters. In the background, a small, fortified settlement rests along the waterfront, with cultivated fields nestled into a protected valley just beyond. On a high bluff overlooking the bay, a second fort watchfully surveys the scene.

Rene Robert Cavalier, Sieur de La Salle, a French nobleman, explored the lower reaches of the Mississippi from the north, reaching the delta in 1682. Recognizing the profit potential in controlling the Mississippi, thus linking French colonies in Canada with the Gulf of Mexico, La Salle returned to Europe to request Louis XIV sponsor settlement at the mouth of the river. Permission granted, he returned to the Gulf Coast. Unable to discover the mouth of the Mississippi due to difficulties in measuring longitude as well as the inherently confusing nature of the coastline, La Salle instead founded his colony, Fort St. Louis, in Matagorda Bay, Texas, considerably west of the Mississippi. The fledgling colony, although plagued by mismanagement, disease, and hostile American Indian nations, antagonized the Spanish, who had long laid claim to the region. In response, they sent no less than three naval expeditions to map the Gulf Coast and ultimately established in 1790, the mission 'San Francisco de los Tejas'.

As for La Salle, he continued to search for the Mississippi, pushing his men and resources to the limit. In 1687, on one such exploration eastward, he was murdered by disgruntled follower Pierre Duhaut. Fort St. Louis itself was raided by American Indians multiple times from its founding, but was ultimately destroyed in 1689 by a Karankawa raid. The remaining ruined structures were further demolished by the Spanish two months later. Twenty years later, France later made a second attempt to follow up on La Salle's claims in Louisiana, successfully founding New Orleans in 1718.

Construction of the Fan

Most likely of French construction, the fan is mounted on 24 sticks with mother-of-pearl end-pieces on either side. The sticks are finely carved with figural representational of cherubic children frolicking among elaborately painted vines, many playing musical instruments. The mother-of-pearl endpieces feature vines, acanthus leaves, and various animals, including birds, sheep, and what might be a rabbit. These side panels also bear the centrally situated symbol of a face surrounded by solar rays, the icon of Louis XIV, the Sun King of France, who ruled from 1643 until his death in 1715 - overlapping with the La Salle Expedition. This may suggest that the fan was made during Louis XIV's reign, or it may merely represent an homage to that much revered monarch.

The present fan is undated, but was likely produced between 1718 and 1750. It was engraved on copper and printed, with hand color embellishment added prior to mounting. The present fan represents one of two known surviving examples. The other example was discovered in Spain in 2010-11, and subsequently sold at Dorothy Sloan Auctions in 2013, where it fetched some 37,000 USD. That example was tentatively identified as 'English' by Sloan and consultants from the Greenwich Fan Museum, but we believe this to have been an error, as the iconography present on this map, particularly the emblem of Louis XIV, would not have appealed to an English audience. Likely, as most such fans of the period, the fan itself was printed in Europe, then mounted to sticks carved in Asia and imported by the French, British, or Dutch East India Companies. Sloan further submitted her example of the fan to forensic color analysis, which she used to date the fan - this analysis applies equality to the present fan, and is quoted below,

Forensic examination of the paints used on the fan indicate that one of the colors is Prussian blue, which came into existence in 1704 and was widely available by 1722. The green paint incorporates yellow ochre, an eighteenth-century ingredient supplanted by chrome yellow in the nineteenth century. Its presence especially argues for an eighteenth-century date.

Very good. Some wear on original folds.
Looking for a high-resolution scan of this?