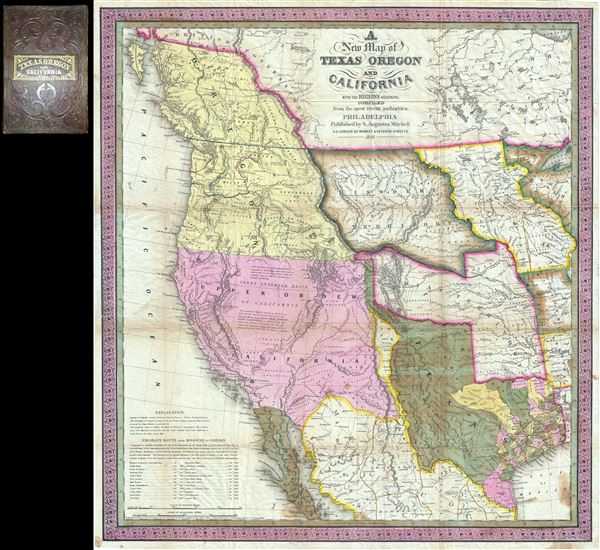 The quintessential trail map of the American west.

Considered 'the quintessential trail map of the American West' Samuel Augustus Mitchell's 'New Map of Texas Oregon and California' is one of the most important 19th century pocket maps ever issued. In Mitchell's own words

This map comprises all that portion of North America, which extends from lat 26° to 56° north: in its upper part it stretches from the Mississippi, and in its lower part form the Sabine River to the Pacific Ocean. It includes the State of Texas, the territory of Oregon as claimed by the United States, and the chief part of California; the adjoining regions comprehend the Missouri and the Indian territories, the whole of Iowa, portions of Wisconsin, Missouri and Arkansas, with the Mexican states of New Mexico, Durango, Chihuahua, Coahuila, New Leon, Tamaulipas, and Sonora; besides a portion of the British Possessions.

The importance of this map in the history of the American westward expansion cannot be understated. When Brigham Young and the Mormons set out to settle Utah, he famously ordered 6 copies. In fact, one example in the collections of Brigham Young University bears a manuscript annotation identifying Mormon settlements in Utah, making it the first known map to do so. However, it was not only Mormon emigres who took advantage of Mitchell's work, it was simply the best map of the time for anyone planning the long trek westward and was consequently extremely popular. Mitchell's map offered the best published mapping of many of most important transcontinental routes, including the 'Oregon Trail' (up the Platte, across South Pass, and down the Snake to the Columbia), the Caravan Route to Santa Fe (from Jefferson City, roughly following the Arkansas and Salt Fork Rivers, the across modern day Kansas and Colorado to Santa Fe), and the Spanish Trail (from Santa Fe crossing the Rocky Mountains via Salina Canyon before following the Virgin and Mohave Rivers to Los Angeles). Also noted, though given less attention are several old trade routes extending from Louisiana through Texas and into Mexico.

This map was issued on the cusp of the Mexican American War (1846 - 1848). Texas had declared itself free of Mexico only to join the United States a few years later. Here Texas is presented at its fullest according to the 1844 U.S. government mapping of William H. Emory. The boundaries extend from the Sabine River westward to the Rio Grande (del Norte), and northwards to the Green Mountains with a panhandle extending even further to 42° north. Texas surrendered most of this territory to the Federal government in the Great Compromise of 1850 in exchange for government assumption of the state's staggering public debt. Mitchell is an eloquent and passionate advocate of Texas colonization, giving Texas first position in this map's accompanying guidebook and describing it in the most favorable terms,

the climate of Texas is mild and agreeable; and, as the country is free from swamps, and the wooded tracts are quite open and destitute of underwood, is more healthful than the corresponding sections of the United States.

When Mitchell composed this map California (at the time all of modern day California, Utah, Nevada, and Arizona, as well as parts of Colorado and New Mexico) had declared itself independent of Mexico but had not yet been annexed into the United States. The territory claimed by the California Republic is, curiously, limited to those lands west of the Sierra de los Mimbres and Sierra de Anahuac, thus leaving Mexico with a curious finger of territory extending northwards as far as the Green Mountains, and situated between these ranges and the Rio Grande (Texas). Mitchell must not have been impressed with the potential of California for he describes it and its people in somewhat unfavorable terms,

Californians are relatively few in number, yet they have a distinctive character. Descended from the old Spaniards, they are unfortunately found to have all their vices, without a proper share of their virtues; they are exceedingly fond of gambling which is equally in favor with the male and female portion of the community …. Their amusements are cock-fighting, bull and bear-baiting, and dancing; these are the predominant occupations of their lives, always accompanied with excessive drinking. The female portion of the community are ignorant, degraded, and the slaves of their husbands. They are very fond of dress, and will make any sacrifice to gratify it. The men have no trades, and depend for everything upon the converted Indians, some of whom are quite ingenious both as carpenters and blacksmiths. The white are so indolent, and withal have so much pride, as to make them look upon all manual labor as degrading. … the Indians of Upper California are indolent and pusillanimous, and destitute of the boldness and energy displayed by many of the aborigines In other quarters. Excepting those that have been converted at the missions, the women go nearly, and the men entirely naked, and they are all extremely filthy in their habits.

Mitchell's tone would change a few years later with the entry of Upper California into the United States and the onset of the California Gold Rush.

Mitchell was also a great proponent of the 54°40' North boundary demarcation for Oregon Territory, and in this his mapping follows that of Wilkes. According to treaties signed in the early 19th century, both American and British had equal access to the rich lands of the Pacific Northwest. However, due to their control of John Jacob Astor's former trading post at Fort Astoria and an overwhelming presence in British Columbia, regional dominance generally fell to the British Hudson Bay Company - which often militantly opposed the presence of American fur traders and settlers. Nonetheless, American settlers did begin to penetrate the region in increasing numbers. This only extunated tensions ultimately spurring the '54-40 or Fight' dispute in which Americans interests, championed by Senator Lewis Linn, advocated for a border a 54 deg. 40' N, far north of its present location. The British, by contrast argued for a more southerly border at the Columbia River. Numerous proposals and counteroffers were fielded by diplomats on both sides. Mitchell and many other Americans argued that Spain having given up all of its claims north of 42 deg. in 1819, and Russia having agreed not to settle below 54°40,' confirmed that the Pacific Northwest naturally fell within the boundaries of the Louisiana Purchase. They further argued that discoveries by Captain Gray of Boston and Lewis and Clark firmly established the U.S. 54°40' claim. Even so, British claims are also presented here in orange outline, including the original British claims to lands as far south as the Columbia River, and a small concession to U.S. claims situated in the Vicinity of Mt. Olympus, between the Straits of Juan de Fuca and Grey's Harbor. Mitchell would be disappointed in the very year his map was published for 1846 Oregon treaty firmly settled the boundary at the 49th parallel, where it remains to this day.

This exceptional map comes with its original brown leather binder and 46 page booklet, from which we have quoted extensively in the above description. The booklet serves to describe the lands presented on Mitchell's map, expound upon Mitchell's political viewpoints, provide valuable information to emigrants, and to advertise the Mitchell firm. This map was compiles by Samuel Augustus Mitchell and engraved by H. N Burroughs. All in all, this is a very important map without which any serious western Americana map collection is incomplete.

Very good. Some spotting and wear on original folds. Folds into original binder, but stored flat.