1784 Bocage Map of the Battle of Thermopylae Pass, Ancient Greece 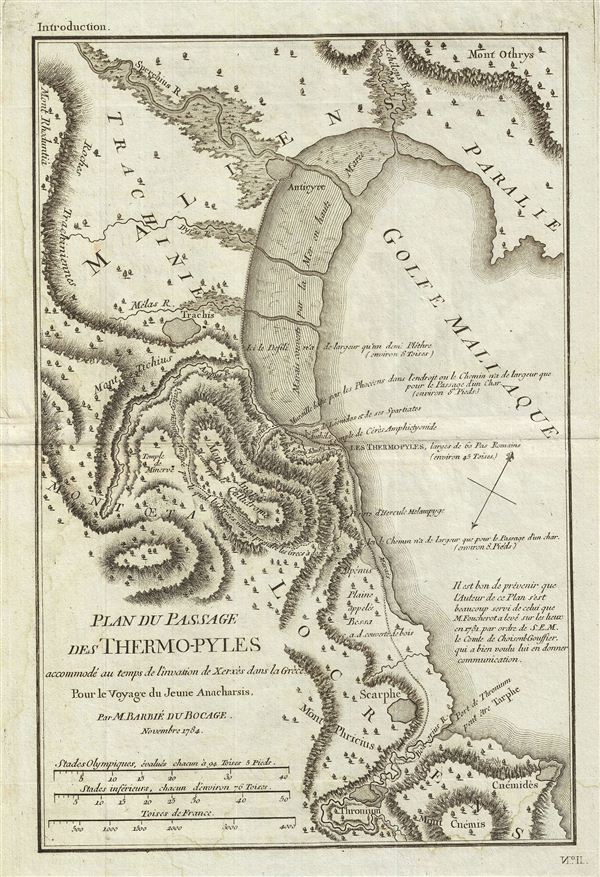 1784 Bocage Map of the Battle of Thermopylae Pass, Ancient Greece

The narrow pass that was the site of the Battle of Thermopylae, featured in the 2007 Hollywood blockbuster '300'.

This is a fascinating 1784 map or plan of the Thermopylae Pass in Ancient Greece. Also known as 'The Hot Gateway' due to the numerous sulfur springs. This pass is the site if the famous 480 BC Battle of Thermopylae between Xerxes I of Persia and the 300 Spartans, led by King Leonidas. According to the accounts of the Greek historian Herodotus, the two armies fought for three days by the end of which the 300 Spartans fought to the last man, defending the only road through which the Persian army could pass. essentially a delaying action, the Spartan sacrifice allowed the other Greek city states to prepare their forces, eventually setting the stage for the defeat of Xerxes in the Battles of Plataea and Salamis. This battle was the inspiration for the 2007 Hollywood blockbuster '300.' Prepared by M. Barbie de Bocage in 1784 to illustrate the Travels of Anacharsis.