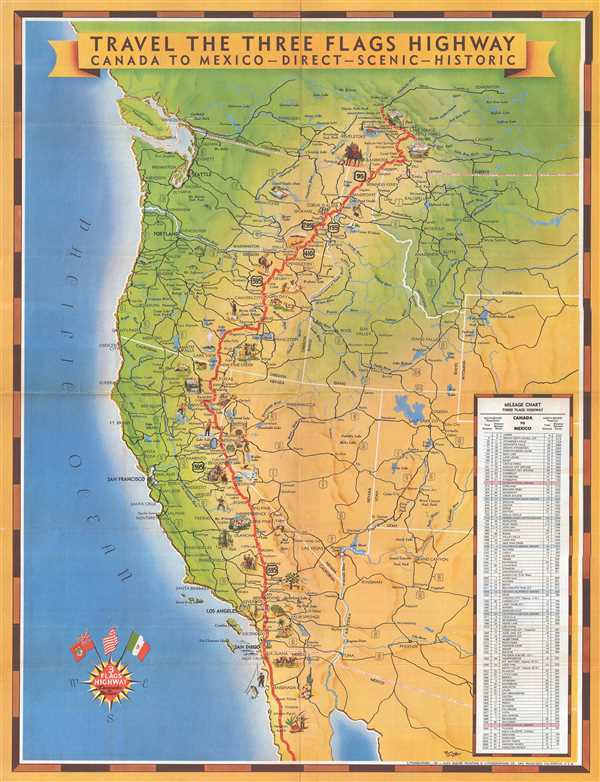 Map of an American highway with a cult following - the Three Flags Highway!

This is a 1950s Pierre Vittier pictorial map of the Three Flags Highway, also known as U.S. Highway 395. Known as the Three Flags Highway because it connected Canada, the United States, and Mexico, the map depicts the region from Edmonton, Alberta, Canada to Hamilton Ranch, Mexico and from the Pacific Ocean to Wyoming and Montana. Wonderful pictorial vignettes are illustrated along the route of the Three Flags Highway. People are drawn horse racing, fishing, skiing, hunting, and fishing, while natural landmarks such as Sequoia National Park, Mt. Whitney, Yosemite National Park, Lake Tahoe, and Banff National Park in Alberta are also depicted. A view of the Grand Coulee Dam is included in Washington State.

A Short History of the Three Flags Highway

The Three Flags Highway, also known as U.S. Route 395, is a highway in the western United States with a cult following much like the celebrated U.S. Route 66. At its longest, the highway stretched 1,490 miles from San Diego Bay to the Canadian border and effortlessly connected with highways in both Canada and Mexico. Today, U.S. 395 has been significantly shortened in favor of Interstate 15, bit still remains an important north-south route along the Sierra Nevada Mountains and in eastern Oregon and Washington, where distances to other highways can reach into the hundreds of miles. Though not as well-known as Route 66, efforts are currently underway to reinvigorate the highway in order to preserve the historic landmarks and Americana that exist along its route.

Cities and towns all along the highway are labeled, including Tijuana, Mexico, San Diego and San Bernardino, California, Carson City and Reno, Nevada, Walla Walla, Washington, Coeur d'Alene, Idaho, and Jasper, Alberta. As this is a highway map, U.S. 395 is not the only highway illustrated. Highways snake their way across the western United States, all of which are labeled. Cities and towns throughout the region are also indicated, along with rivers, lakes, and other national parks. A mileage chart is situated along the right border, providing the viewer with distances between cities and towns from Jasper, Canada to Hamilton Ranch, Mexico in both directions.

This map was drawn by Pierre Vittier, lithographed by the Alex Dulfer Printing and Lithographing Company, and published by the Three Flags Highway Association in the 1950s.

Alexander Dulfer (1877 - 1946) was an American printer based in San Francisco. Born in Germany, Dulfer was the owner and founder of Alex Dulfer Printing and Lithographing Company and had been engaged in the printing business in the San Francisco area since 1896. He married Mary Imelda, with whom he had five children. Learn More...