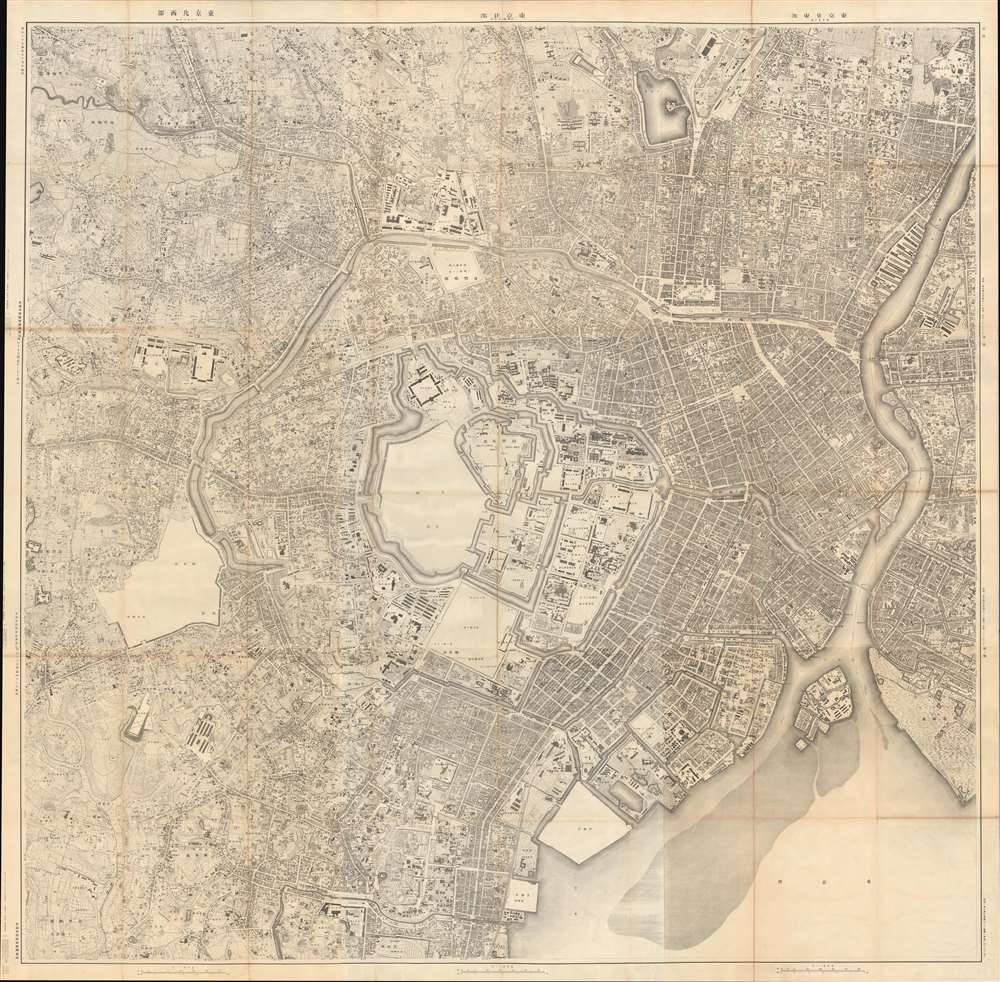 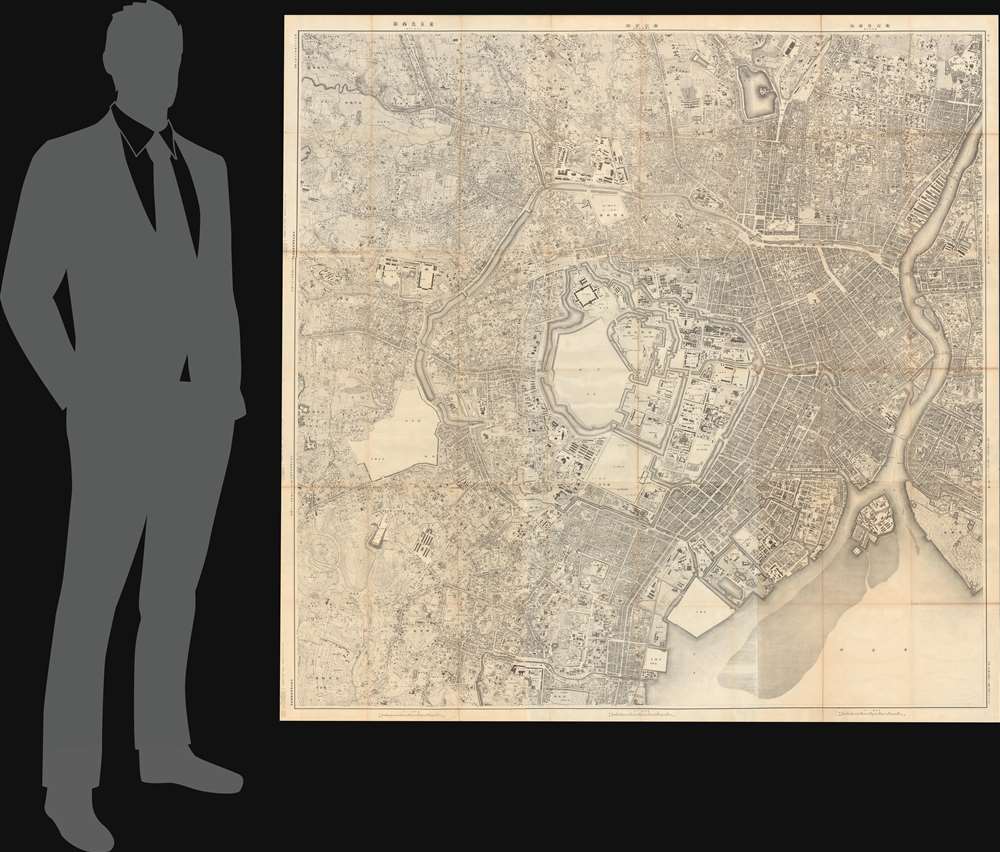 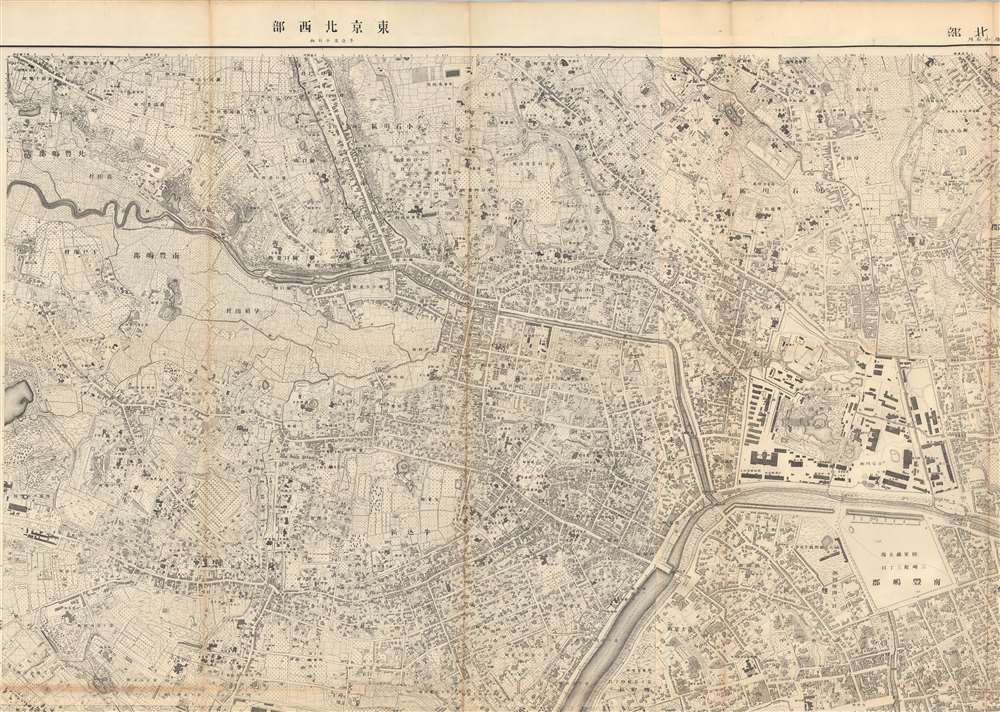 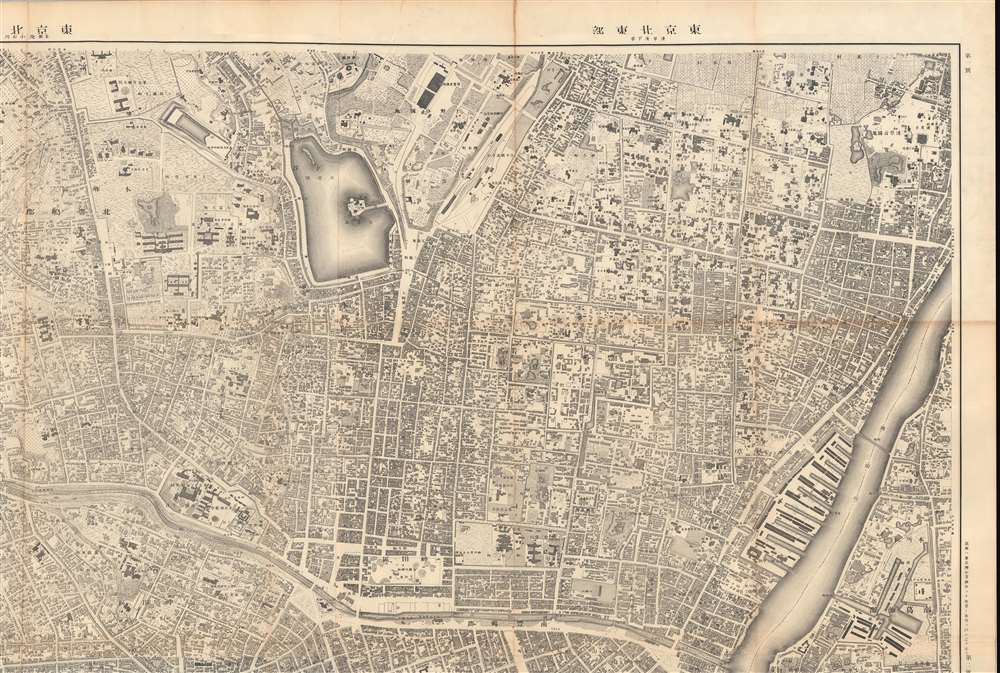 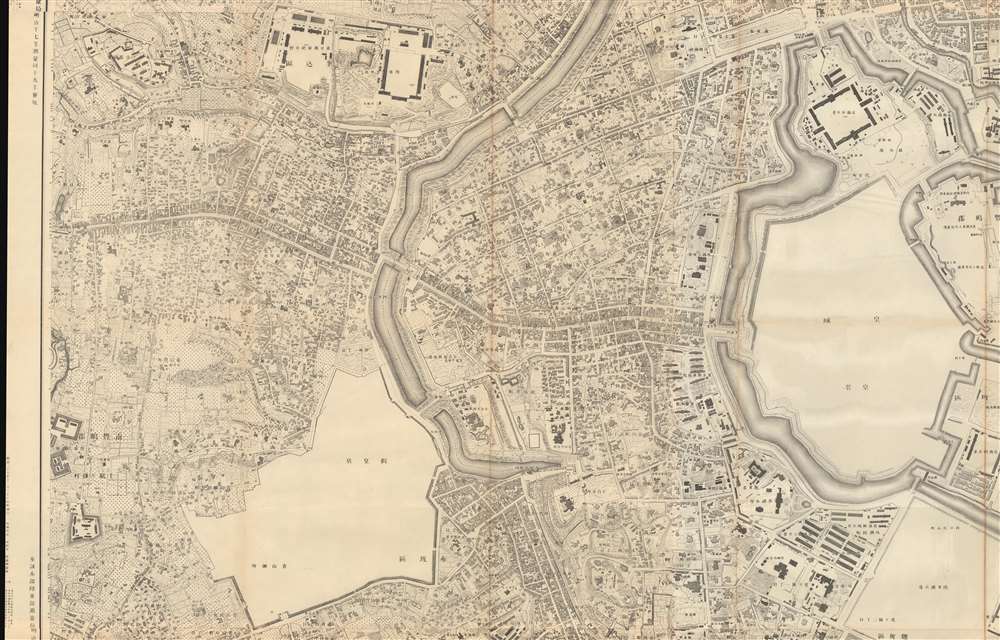 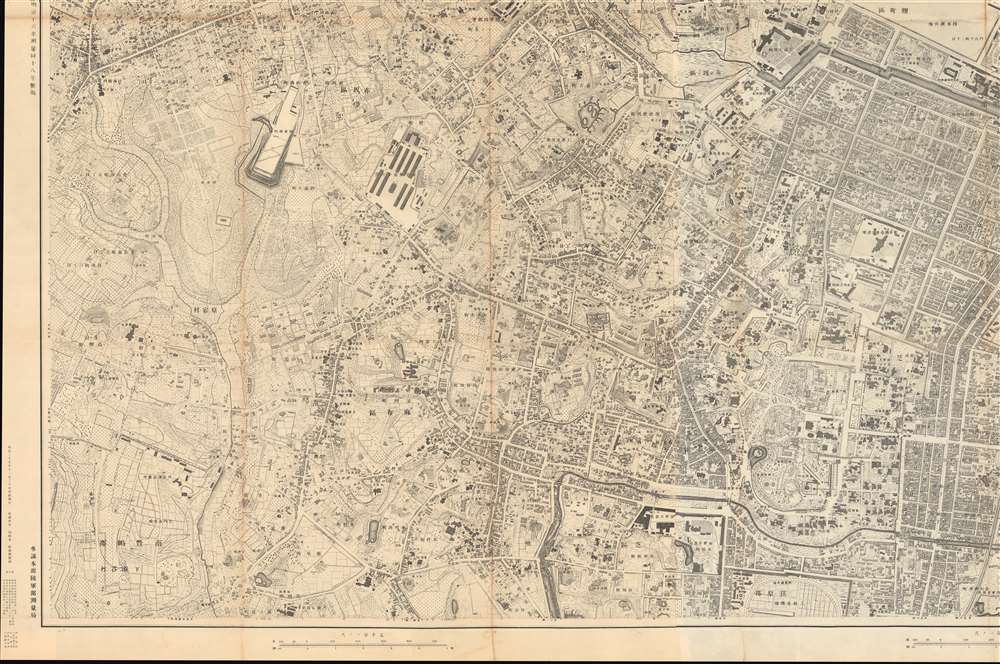 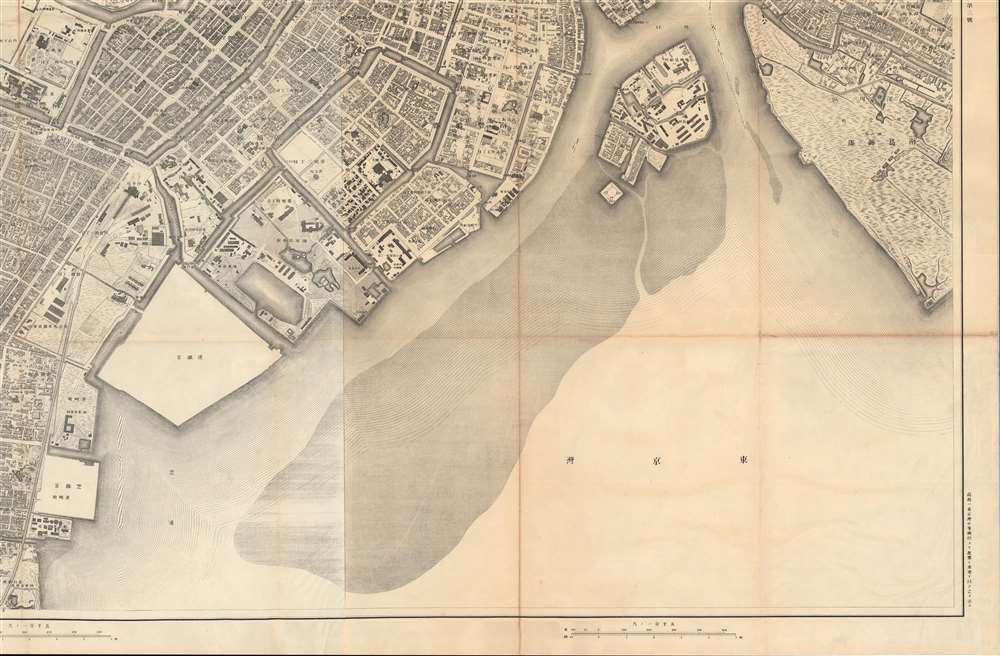 This enormous meticulously detailed 1894 (Meiji 27) Japanese Imperial Land Survey map of Tokyo is among the first truly modern maps of the city - the result of a monumental survey effort in the Early Meiji - and captures the city on the cusp of its transformation into a modern world capital. It is oriented to the north with the Imperial Palace at center and presents the city during a transformation from the old Tokugawa capital of Edo to the modernized capital of Imperial Japan. Given the size of this map and its production by the Imperial Land Survey, it very likely was used in a government office dealing with urban planning.

The map displays a truly incredible level of detail, down to individual buildings, showing the conversion of Tokyo from the Tokugawa capital to a truly modern city, deliberately built to rival the great cities of Europe. Some of the old canals that intersected and shaped Edo are still visible here, but most were filled in or paved over in the following decades, taking the bridges with them.

A number of public parks were established in the years preceding this map's production, using land donated by the imperial family or temples and shrines, including Ueno Park at top-center-right. The large open space at left center is Akasaka, now home to a guest house converted from a 1909 palace. The palace had originally belonged to the Owari branch of the Tokugawa clan and was 'donated' to the imperial family soon after the Meiji Restoration. To the south of the Imperial Palace, on land that had housed the residence of the tozama daimyo in the Edo period, is a drill ground for the army, which is now Hibiya Park.

Similarly, to the north of the Imperial Palace, a garden belonging to the Tokugawa family was handed over to the army, which used it as a drill ground and built an artillery factory. However, much of the original garden was maintained and the land is now the Koishikawa Kōrakuen (小石川後楽園) park and Nihon University (日本大学).

At bottom-center is the Hama Palace, a guest house for foreign heads of state and dignitaries (now the Hamarikyū Gardens), and Shimbashi Station (新橋駅), Tokyo's first train station.

Tokyo and a number of other Japanese cities went through a dizzying period of administrative reforms during the Meiji era, due to both the pace of their growth as well as changing bureaucratic practices and conceptions of governance. Initially, elements of the Tokugawa era system of wards were maintained to appease elites who feared more rapid reforms. Then, in 1871 - 1872, Tokyo Prefecture was expanded and a system of 'large and small wards' (大区小区制) was put into place. Further adjustments were made and a wholesale reorganization launched in 1888 - 1889. With this reorganization, the central government tried to more directly administer Tokyo, Osaka, and Kyoto (this was unpopular and abolished a decade later), while also eliminating the lowest level of administration, the neighborhood. These changes required frequent updating of maps with the latest administrative divisions and place names.

With the Meiji Restoration in 1868, the Tokugawa were displaced from Edo and the Emperor Meiji moved the imperial capital from Kyoto to Edo (renamed Tokyo, 'eastern capital'). The Meiji Era was a period of tremendous change in Japan, particularly in cities, and in Tokyo more than any other. Most of the daimyo from throughout Japan who had maintained residences in Edo left the city with their families, significantly reducing the population. At the same time, new ideas, technologies, and fashions from abroad were sought out and adopted, and in the process were localized to suit Japanese tastes. Building on the foundations of Tokugawa Edo, Meiji-era Tokyo intermingled traditional architecture with styles reminiscent of Victorian London. However, much of Tokyo as it exists here would be destroyed in the 1923 Great Kanto Earthquake and again by American bombs in the closing months of World War II.

This map was printed and distributed on November 30, 1894 (Meiji 27) by the Imperial Land Survey (陸地測量部) based on a survey done in 1883 (Meiji 16) and a plate made in 1886 (Meiji 19). Several publishers and cartographers were involved in its production, including Okada Eisuke (岡田榮助), Owada Junnosuke (小和田順之助), Kawamura Ryūjitsu (河村隆實), Utsuki Nobuo (宇津木信夫), and Kawakatsu Yoroitarō (川勝鏜太郎). It is worth mentioning that these cartographers and publishers collaborated with each other and with the Imperial Land Survey on other maps, though only with this exact configuration for this map. For example, Utsugi, Okada, and Owada had collaborated on an 1887 comprehensive map of Tokyo (東京全圖) for the Imperial Land Survey. The only institution known to hold this map is the National Diet Library, which has two catalog entries, one dated to 1894 and one to 1895, suggesting that the map was reprinted the following year. This map has no known history on the market.


Okada Eisuke (岡田榮助; fl. c. 1882 - 1897) was a Tokyo-based publisher of maps as well as books on military science, translation, and industry, topics characteristic of the Meiji era. Learn More...


Kawamura Ryūjitsu (河村隆實; fl. c. 1886 - 1894) was a Tokyo-based publisher of maps as well as books about cartography and geography. Learn More...


Utsuki Nobuo (宇津木信夫; fl. c. 1879 - 1896) was a Tokyo-based publisher of maps, as well as books about military science, mathematics, and cartography. Learn More...