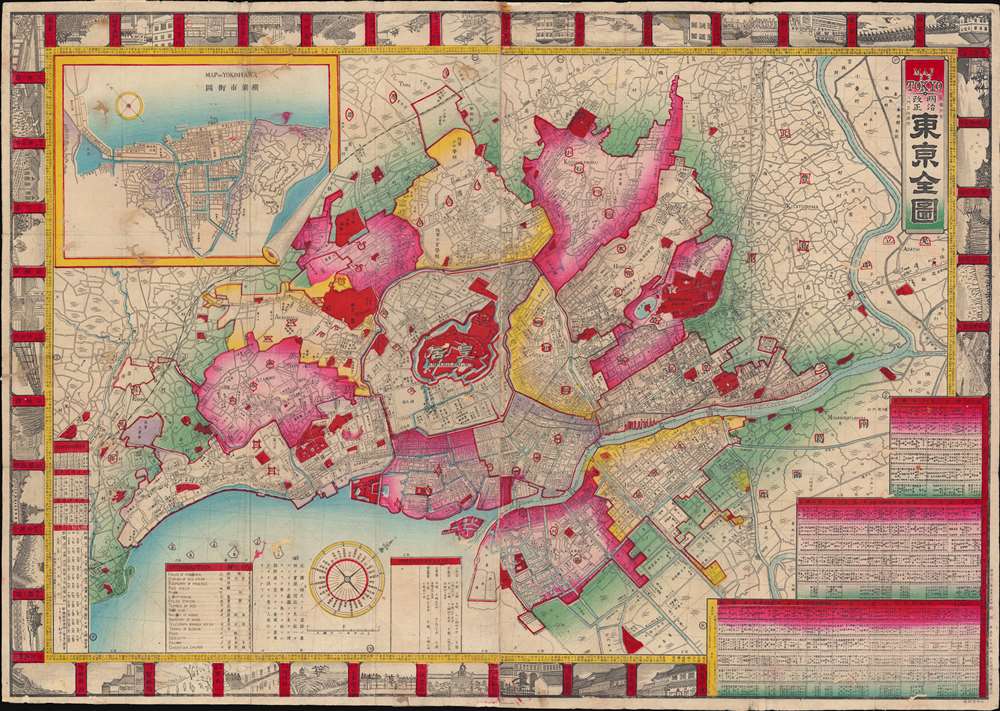 A most intriguing 1888 Meiji 21 Koshodo Map of Tokyo representing the height of Meiji Era cartographic excellence. The map is oriented to the northwest and centered on the Imperial Palace. Unlike most Meiji maps of Tokyo, this map made for both Japanese and foreign travelers. General areas are named in English and there is even a numbered English key in the lower left identifying sites of significance to the foreign traveler. A map of Yokohama, the primary foreign Enclave of the Meiji, appears in the upper left. Most interestingly, contained within the yellow border between the images and the map is a guide (in Japanese) for a 4-day walking tour of Tokyo, taking in the vignette illustrations of important sites built into the border. To the right of the compass rose is a schedule for trains leaving from Ueno and Maibashi. The inset at lower left corner shows the train schedule Tokyo - Yokohama, and the price for each stage of the journey. The inset at the lower right corner is a listing of municipal and rural districts.

Stylistically this map represents the height of the Meiji-era (1868 - 1912) cartographic tradition - where in western style cartographic standards, lithographic printing, and imported inks, were combined with Ukiyo-e color traditions and aesthetic values. This map falls in a cartographic lineage that begins with the Meiji Restoration in 1868 and continued through about 1895. Here, the boldly bright palette likely associates this map with aka-e (赤絵; 'red pictures'), illustrations in vivid color achieved through imported German-made inks. Such maps began to fall out of fashion near the turn of the century, when they were supplanted by more reserved printed color.

Koshodo (耕書堂; 1773 - c. 1890) was a Japanese publishing house active in Tokyo during the Edo and Meiji periods. It was founded by Tsutaya Juzaburo (蔦唐丸; 1750 - 1797). The firm published many prints, books, Ukiyo-e, prints, maps, guides, novels, poetry, and more. It continued in the same family for 5 generations, remaining in operation well into the Meiji period. Learn More...

Good. Some Japanese repairs on verso.