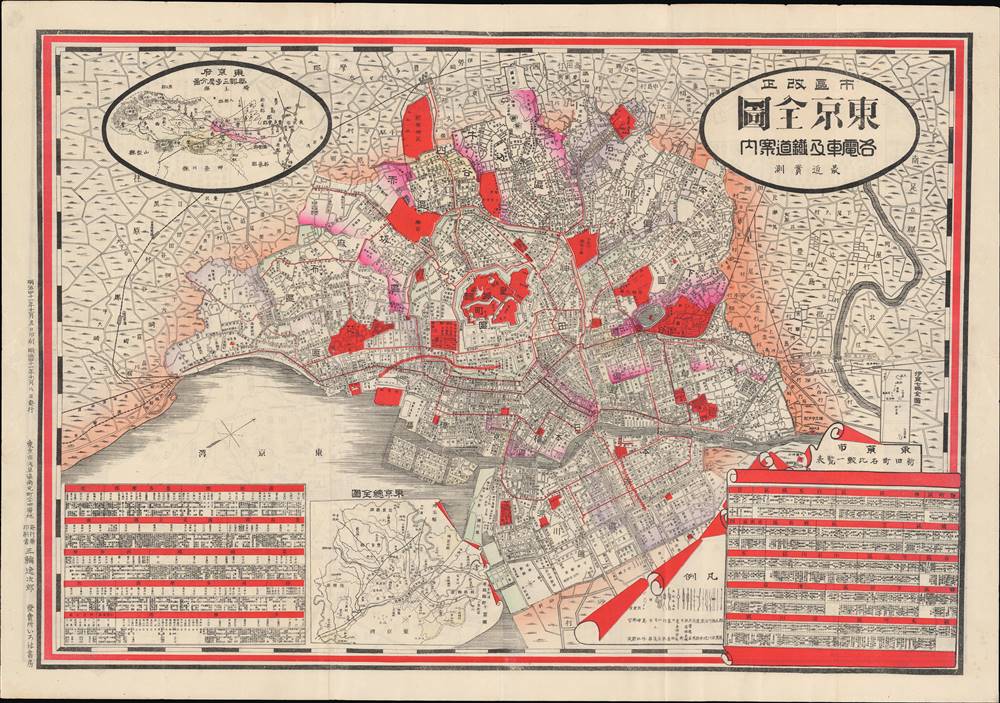 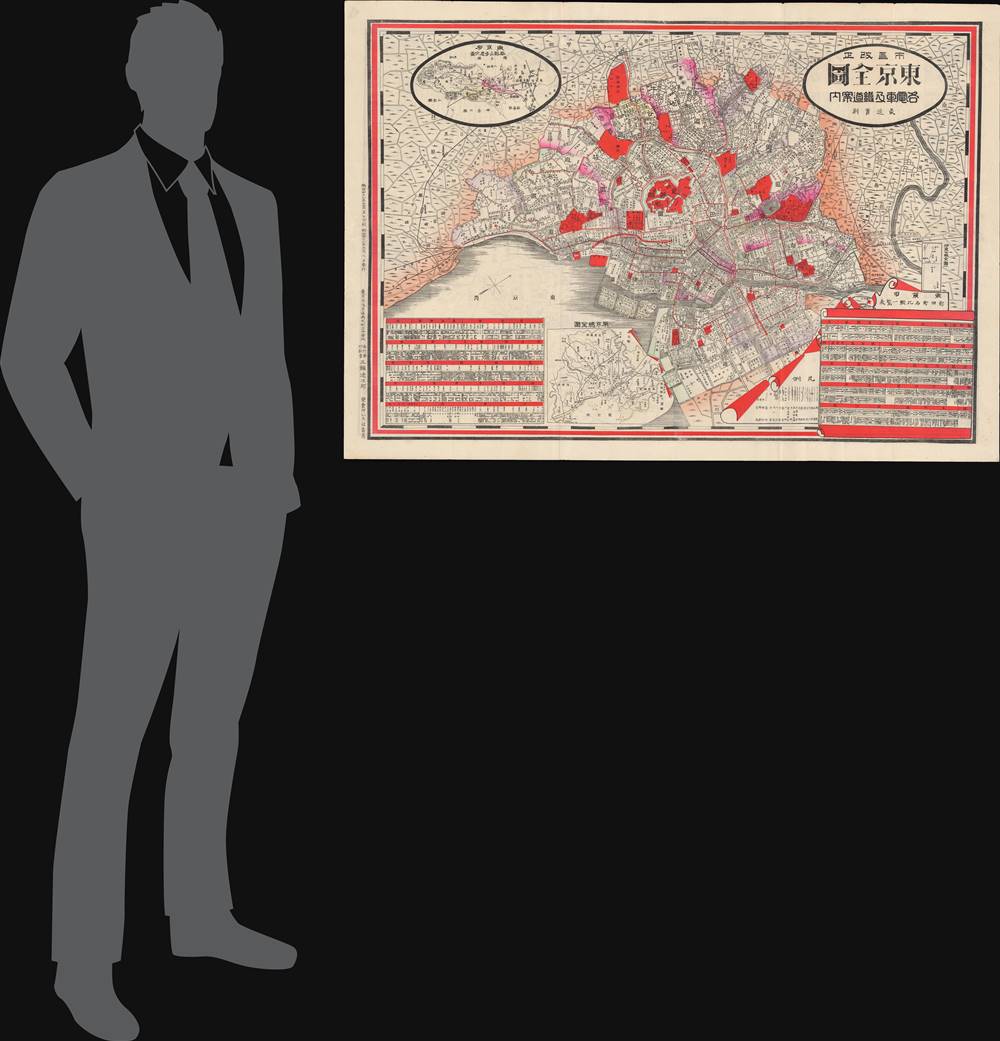 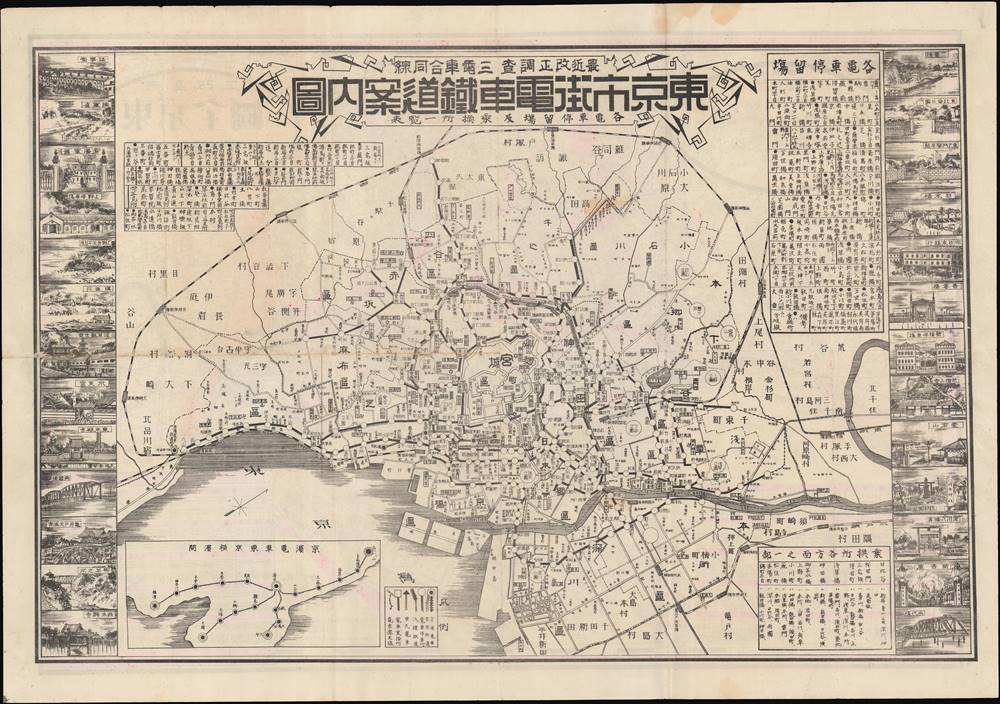 This is a 1904 (Meiji 41) map of Tokyo printed and published by Miwa Itsujirō (三輪逸次郎). It emphasizes streetcars and railways, and dates from the early period of Tokyo's electric railway (streetcar) system.

The map is oriented towards the northwest with the Imperial Palace at center. The borders of urban wards (區) are shaded in purple, whereas lands of the military or imperial household are a stark red. At top-left is an inset of Tokyo Prefecture (東京府), which encompassed the suburbs and villages near the metropolis. A table at bottom-left names the counties (郡) of the prefecture and the villages therein, along with the Izu and Ogasawara Islands.

At bottom-center id an inset map of Tokyo Municipality and immediate vicinity along with a legend showing symbols for administrative, geographic, cultural, and transportation features. The table at bottom-right shows a comparison of the old and new names and the organization of various neighborhoods of Tokyo, according to the administrative reforms of 1888 – 1889 (discussed below). Above, at right-center is a small inset map of the Izu and Ogasawara Islands (伊豆七島全圖). Despite their apparent proximity here, Ogasawara is in fact some 1,000 kilometers from Tokyo and the Izu Islands, but was and remains a subprefecture of Tokyo.

Red lines show existing and planned streetcar routes within Tokyo Municipality, while the thicker red line extending from the existing line terminating at Shinbashi Station (marked here as 鉄道局) to central Tokyo in front of the Imperial Palace is the extension of the Tokaido Main Line to the new Tokyo Station. Plans for this extension were approved by the Japanese Diet in 1896, but delayed repeatedly, including by the Russo-Japanese War and postwar debts, but it was finally built between 1908 and 1914. The squiggly red line in Honjō (本所區) is probably new construction related to the Sōbu Railway (総武鉄道) passing through Honjō Station (本所停車場) and terminating at Ryōgoku Station (両国停車場).

The verso (back) is a comprehensive map of streetcar lines, electric railways, and conventional railways in and around Tokyo, including each station and transfer point, which are also listed in the surrounding tables surrounding. At bottom-center is a small legend, to the left of which is a map of the Tokyo-Yokohama Electric Railway (東濱電車). Illustrations along the right and left show major landmarks and railway stations.

This map was made soon after the rapid development of Tokyo's streetcar system, later collectively known as Tokyo Toden (東京都電). From the 1903 inauguration of the first line, the Tokyo Electric Railway, a string of new companies, mergers, acquisitions by the municipality, and even more new companies left Tokyo with one of the most extensive streetcar systems in the world. By the 1930s, there were some forty lines. The destruction and financial difficulties caused by World War II, the greater use of buses and automobiles in the postwar period, and the development of Tokyo's expansive subway system (beginning in 1927) all worked to reduce streetcar ridership. Starting in the 1950s, lines were closed down in succession, and today only the Toden Arakawa Line (都電荒川線), also known as the Tokyo Sakura Tram, remains in operation.

Two years before this map was published, the Japanese Diet passed the Railway Nationalization Act, the first step towards merging the copious private and government-run railways that emerged in the Meiji period. The nationalization of 17 private intercity railways in 1906 - 1907 more than quintupled the railway network under government administration. This move was motivated primarily by delays in mobilizing troops during the Russo-Japanese War (1904 – 1905), which was seen as a major strategic liability.

During the Second World War, all railways, including the remaining privately-operated lines (mostly urban and suburban commuter trains), were nationalized. After the war, American occupation authorities reorganized the railways as Japan National Railways (日本国有鉄道 Nippon Kokuyū Tetsudō, often abbreviated as Kokutetsu). Starting from a very difficult position in the early postwar period, JNR oversaw the revival of Japanese passenger railways and widespread electrification, most notably with the famous Shinkansen 'bullet trains.' However, over-expansion of the Shinkansen network along with other inefficiencies and the rise of automobiles and air travel led to JNR's bankruptcy in 1987, after which it was reorganized into several for-profit corporations (whose stock is solely owned by the Japanese government).

Tokyo and several other Japanese cities went through a dizzying period of frequent administrative reforms during the Meiji era, due to both the pace of their growth as well as changing bureaucratic practices and conceptions of governance. In an 1888 - 1889 reform establishing municipalities, the central government tried to more directly administer Tokyo, Osaka, and Kyoto (this was unpopular and abolished a decade later), while also eliminating the lowest level of administration, the neighborhood. These changes required frequent updating of maps with the latest administrative divisions and place names.

With the Meiji Restoration in 1868, the Tokugawa were displaced from Edo and the Emperor Meiji moved the imperial capital from Kyoto to Edo (renamed Tokyo, 'eastern capital'). The Meiji Era was a period of tremendous change in Japan, particularly in cities, and in Tokyo more than any other. New ideas, technologies, and fashions from abroad were sought out and adopted with incredible rapidity, and in the process were localized to suit Japanese tastes. Building on the foundations of Tokugawa Edo, Tokyo expanded quickly and, in the process, intermingled traditional architecture with styles reminiscent of Victorian London.

Stylistically, this map represents a late echo of the Meiji-era (1868 - 1912) cartographic tradition - wherein western style cartographic standards, lithographic printing, and imported inks, were combined with Ukiyo-e color traditions and aesthetic values. The boldly bright palette of vivid colors began to fall out of fashion near the turn of the century, when they were supplanted by more reserved printed color, but we can see traces of the Meiji style here in the prominent purple and red shading.

This map was printed on November 5, 1908 (Meiji 41) and published three days later on November 8. Miwa Itsujirō (三輪逸次郎) is listed as both printer and publisher, while the Iroha Bookstore (いろは書房, c. 1888 - 1930), which frequently collaborated with Miwa, was the seller of the map. It is held by the National Diet Library and Nichibunken (International Research Center for Japanese Studies) but is not known to exist in any institutional holdings outside of Japan and has no known history on the market.

Miwa Itsujirō (三輪逸次郎; fl. c. 1888 - 1930) was a Japanese printer and publisher based in Asakusa, Tokyo. Aside from a handful of maps, he published works on education, military affairs, linguistics, music, and illustrated works based on folk legends for a mass audience. Learn More...