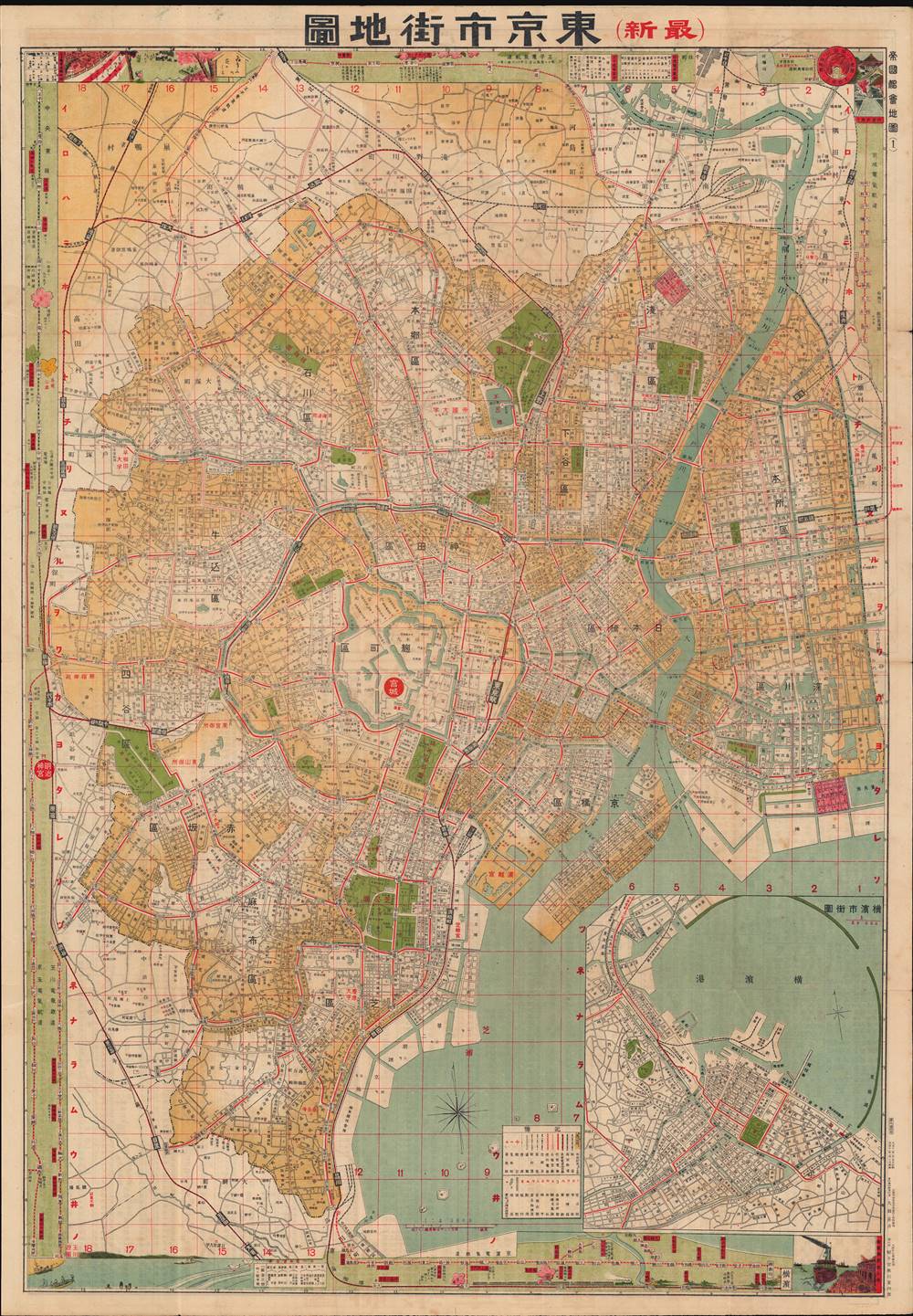 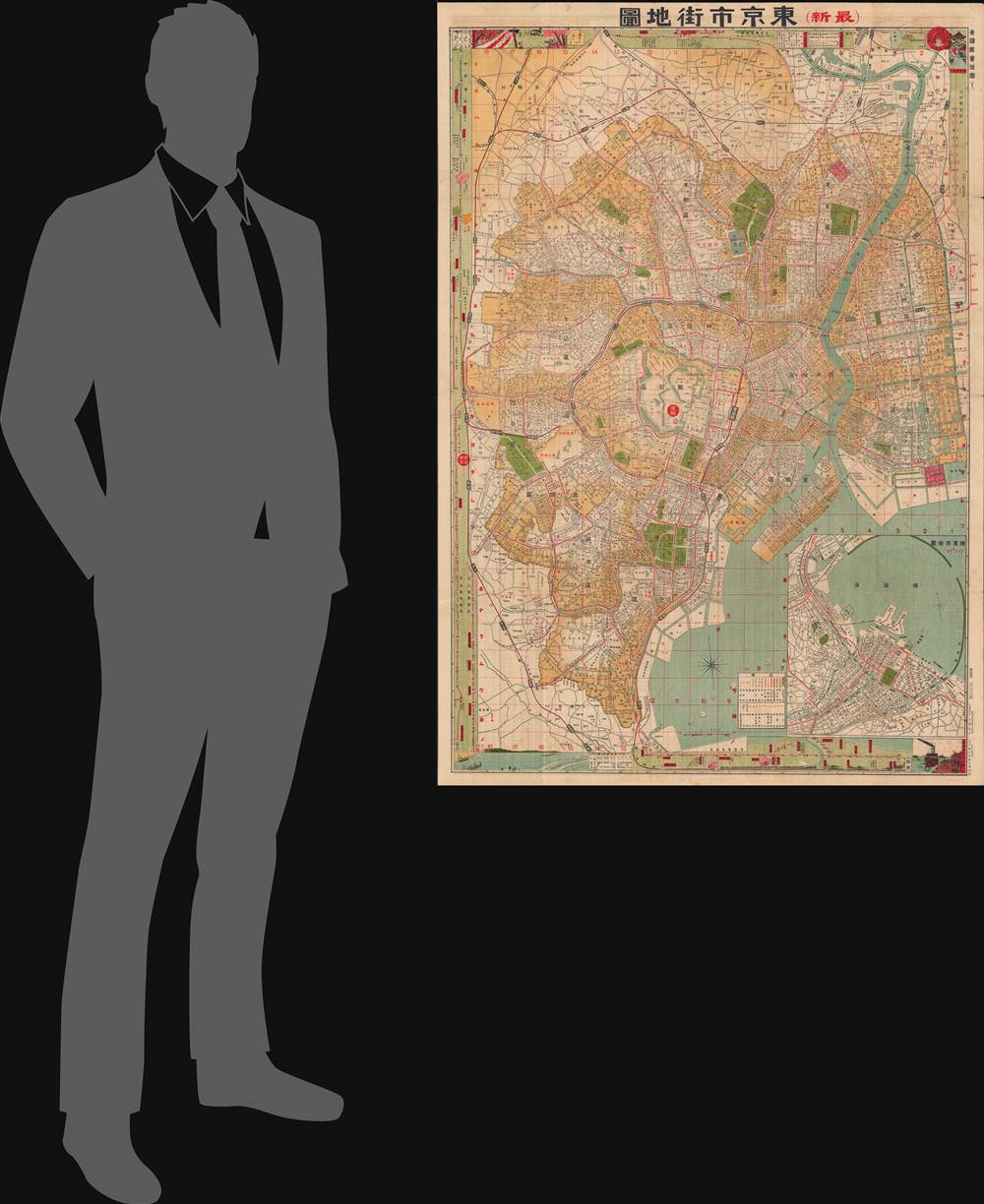 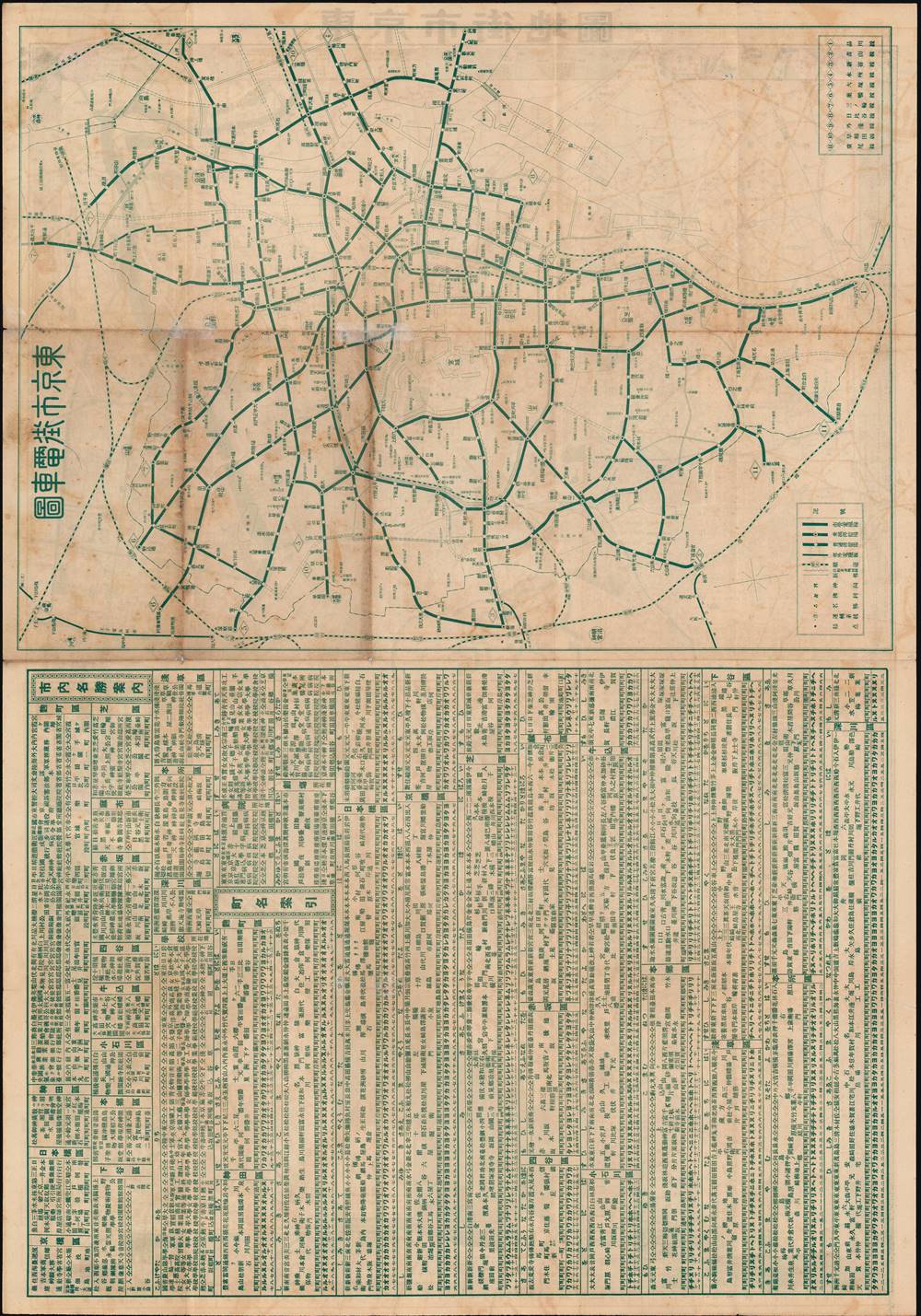 This is a rare 1922 Oobuchi Zenkichi map and guide of Tokyo. It illustrates the density and modernity of Tokyo on the eve of the disastrous Great Kanto Earthquake the following year, which led to large portions of the city being destroyed and rebuilt.

A Guide to the Metropolis

The map is oriented to the north with the imperial palace (宫城) roughly at center. A grid overlays the city, with numbers for vertical columns and kana for the horizontal rows, allowing for easy reference to sites and neighborhoods. Surrounding the main map are simple railway maps showing the routes (and in some cases the ticket prices and timetables) from Tokyo to tourist attractions near the city. Some of are represented by small illustrations, including the Narita-san Shinshō-ji Buddhist Temple (成田山新勝寺) at top-right, the Meiji Shrine and Inokashira Park (井頭公園) at left, and Yokohama at bottom-right.

The legend contains symbols for various administrative boundaries, railways, tramways, wharves, lighthouses, temples, shrines, opera houses, banks, post offices, and more, giving a sense of the rapid development and modernization of the metropolis in the preceding decades. An inset map of Yokohama (also 20000 scale) is included at bottom right.

The back (verso) is a map of the 11 lines of the streetcar network of Tokyo, along with connections to both suburban and long-distance railways. Major temples, Shinto shrines, and famous sites are also noted to help orient the traveler. At bottom is a guide of important sites and landmarks (banks, hotels, schools, imperial residences, embassies, etc.) in each ward (區) of Tokyo, along with the names of the various neighborhoods in each ward of the city.

The Meiji Era was a period of tremendous change in Japan, particularly in cities, and in Tokyo more than any other. New ideas, technologies, and fashions from abroad were sought and adopted with incredible rapidity, and in the process were localized to suit Japanese tastes. The Taisho era saw a general liberalization of society, greater experimentation, and a widening of political participation. By the 1920s, Tokyo was a cosmopolitan global city, one of the largest in the world, with all the entertainment, transportation, luxuries, public spaces, and services that such a status would entail.

This map was printed on January 5, 1922 (Taisho 11) and reprinted five days later on January 10. Oobuchi Zenkichi (大淵善吉), of the Tour Guide Department of the publisher Shinshindō (駸々堂旅行案內部), is listed as the maker, printer, and publisher. At top-right, 'Maps of the Imperial City (1)' (帝國都會地圖) is printed, and this seems to have been the first map in a series bearing that name done by Oobuchi and Shinshindō that also included Shimonoseki, Kyoto, Nagoya, Hiroshima, Osaka, and Nagasaki. This map is not known to exist in any institutional collections and is very scarce to the market.

Oobuchi Zenkichi (大淵善吉; fl. c. 1912 - 1942) was a prolific writer, editor, publisher, bookseller, and cartographer based in Osaka. He was a descendent of Oobuchi Wataru (大淵渉; 1855 ‐ 1907), who founded the Shinshindō (駸々堂) bookstore and publishing house, and particularly focused on tourist maps for various cities and sites throughout Japan. Learn More...


Shinshindō (駸々堂; c. 1881 - 2000) was a bookstore and publisher founded by Oobuchi Wataru 大淵渉 (1855 ‐ 1907) in Kyoto. The company later moved to Osaka and went through several name changes over the course of the twentieth century, developing a niche market for study guides and test preparation books in the process, but ultimately going bankrupt in 2000. Learn More...