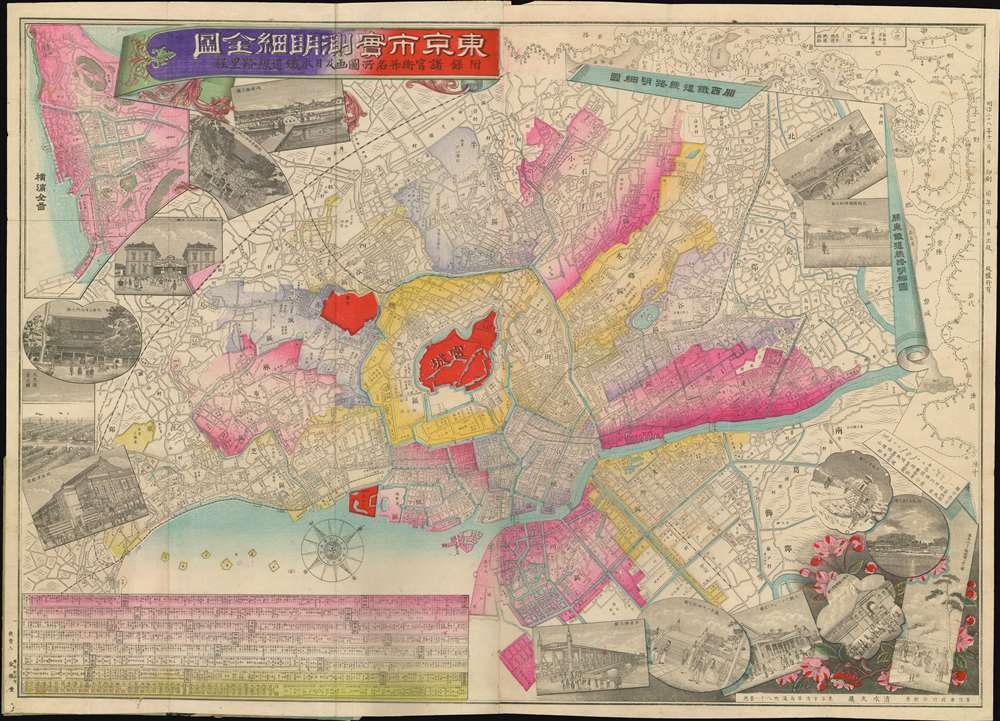 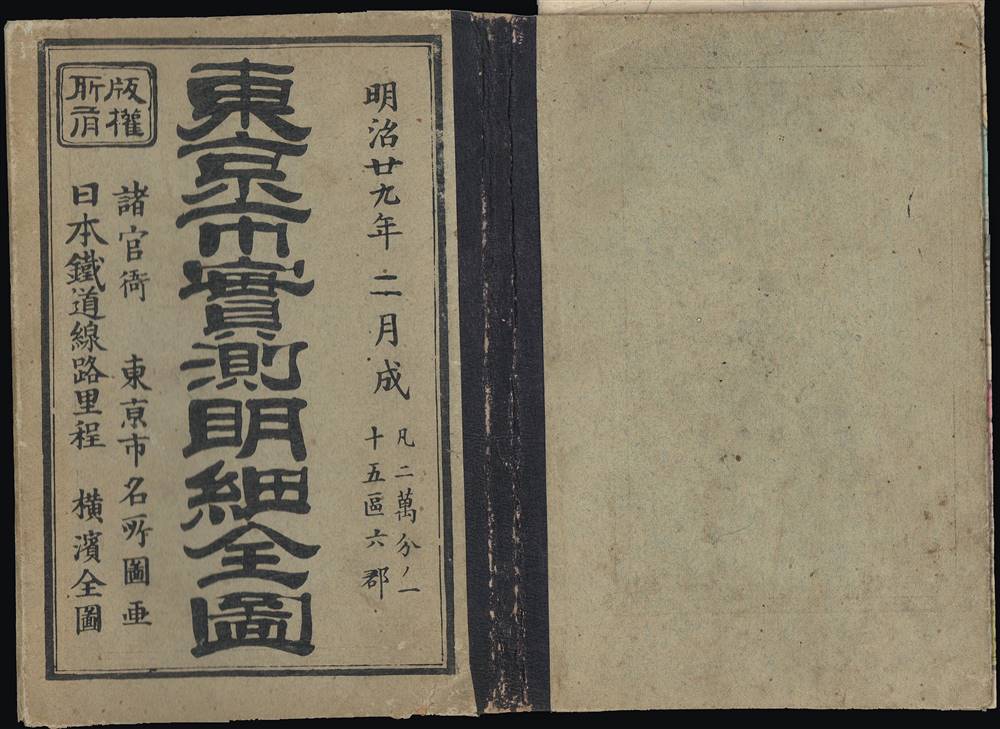 This is a striking and rare 1895 Shimizu Bunzō map of Tokyo, Japan, along with insets of Yokohama and the Japanese rail network. It was meant to highlight recent administrative changes, but it also shows the combination of Japanese culture and outside influences that had come to characterize Tokyo by the mid to late Meiji.

The map is oriented towards the northwest with the Imperial Palace at center. A compass towards bottom-left uses both cardinal directions and the traditional East Asian system, composed of the twelve Earthly Branches derived from ancient Chinese astrology. Each ward (區) of the city is shaded a different color, while land belonging to the imperial household or the military is shaded solid red. The chart at bottom-left lists various neighborhoods within each ward and the villages within each county (郡) outside the municipality.

Surrounding the map are idiosyncratically placed vignette illustrations, an inset map of Yokohama (at top-left), and a diagram of the railway system of Japan (at top-right, with the Kanto region, including Tokyo, at right and the Kansai region, including Kyoto and Osaka, at top). The map itself illustrates railways leading into the city terminating at Shinbashi Station (新橋ステーション), near bottom-center, and Ueno Station (上野ステーション), near right-center (interestingly, this map uses kana to transliterate the English word 'station' rather than the more common kanji 駅, pronounced eki). A legend for the main map, including symbols for geographic features, religious sites, agricultural fields, telegraph offices, rail lines, and more, sits below the railway map.

The illustrations surrounding the map are, clockwise from bottom-left: a theater house for 'reformed' kabuki, which was heavily influenced by Western drama; coastal fields of barley; the Zōjō-ji Temple; Shinbahsi Station; the Sengakuji Temple; the Ryōgoku Bridge; Nijubashi, a bridge leading into the Imperial Palace; the Yasukuni Shrine, in recent years famous as a flashpoint for Japanese nationalism and troubled relations with its neighboring countries; the Mukojima neighborhood covered in snow; Matsuchiyama Shoden, a Buddhist temple; the Asukayama Paper Mill, the first Western-style paper manufacturer (a Paper Museum is now located nearby in Asukayama Park); the Ueno Park Exhibition space, used for various domestic and international exhibitions in the Meiji period; Ueno Station; the Kameido Tenjin Shrine; and the Azuma Bridge.

One atypical feature of this map is the inclusion of seven islands (一番, 二番, and so on) in Tokyo Bay, as well as the larger island of Ishikawajima (石川島) to the east. These are artificial islands built through land reclamation at the end of the Edo period (Bakumatsu). Following their unpleasant experience with Commodore Perry's 'black ships' in 1853 – 1854, the Tokugawa Shogunate rapidly tried to adapt to the reality of foreign military threats. The seven islands were meant to house gun batteries, though not all of them were completed, while Ishikawajima became a shipyard. In 1928, the islands were turned into public park land, and in the 1990s were connected to each other with more reclaimed land to form the large island of Odaiba (お台場).

Tokyo and several other Japanese cities went through a dizzying period of administrative reforms during the Meiji era, due to both the pace of their growth as well as changing bureaucratic practices and conceptions of governance. Initially, elements of the Tokugawa system of wards were maintained to appease elites who feared more rapid reforms. Then, in 1871 - 1872, Tokyo Prefecture was expanded and a system of 'large and small wards' (大區小區制) was put into place. Further adjustments were made and a wholesale reorganization launched in 1888 - 1889, where the central government tried to administer Tokyo, Osaka, and Kyoto more directly (this was unpopular and abolished a decade later), while also eliminating the lowest level of administration, the neighborhood. In the end, Tokyo Municipality was left with 15 wards, which along with 6 suburban counties formed Tokyo Prefecture. These changes required frequent updating of maps with the latest administrative divisions and place names.

With the Meiji Restoration in 1868, the Tokugawa were displaced from Edo and the Emperor Meiji moved the imperial capital from Kyoto to Edo (renamed Tokyo, 'eastern capital'). The Meiji Era was a period of tremendous change in Japan, particularly in cities, and in Tokyo more than any other. Most of the daimyo from throughout Japan who had maintained residences in Edo left with their families and staff, significantly, but only temporarily, reducing the population. At the same time, new ideas, technologies, and fashions from abroad were sought out and adopted at an astonishing pace, and in the process were localized to suit Japanese tastes. Building on the foundations of Tokugawa Edo, Meiji-era Tokyo intermingled traditional architecture with styles reminiscent of Victorian London. However, much of Tokyo as it exists here would be destroyed in the 1923 Great Kanto Earthquake.

This map was printed and published in November 1895 (Meiji 28) (no specific day given). The cover is dated to 1896 (Meiji 29), perhaps indicating a delay between the map's publication and its sale. The maker and printer is listed as Shimizu Bunzō (清水文藏), and Kinrindō (金林堂) is noted as the merchant for the map. This edition of the map is held by the University of California Berkeley and the National Diet Library, while the National Diet Library also has a map by this title dated 1890, made by Sekiya Suematsu (関谷末松) and published by Bun'eido (文榮堂). Both editions are very scarce to the market.

Shimizu Bunzō (清水文藏; fl. c. 1895 - 1896) was a Japanese cartographer and printer based in Tokyo. He published a map of the revised administrative divisions of the city following reforms in 1888 – 1889, but was best known for publishing ukiyo-e artists like Toyohara Kunichika (豊原国周). Learn More...