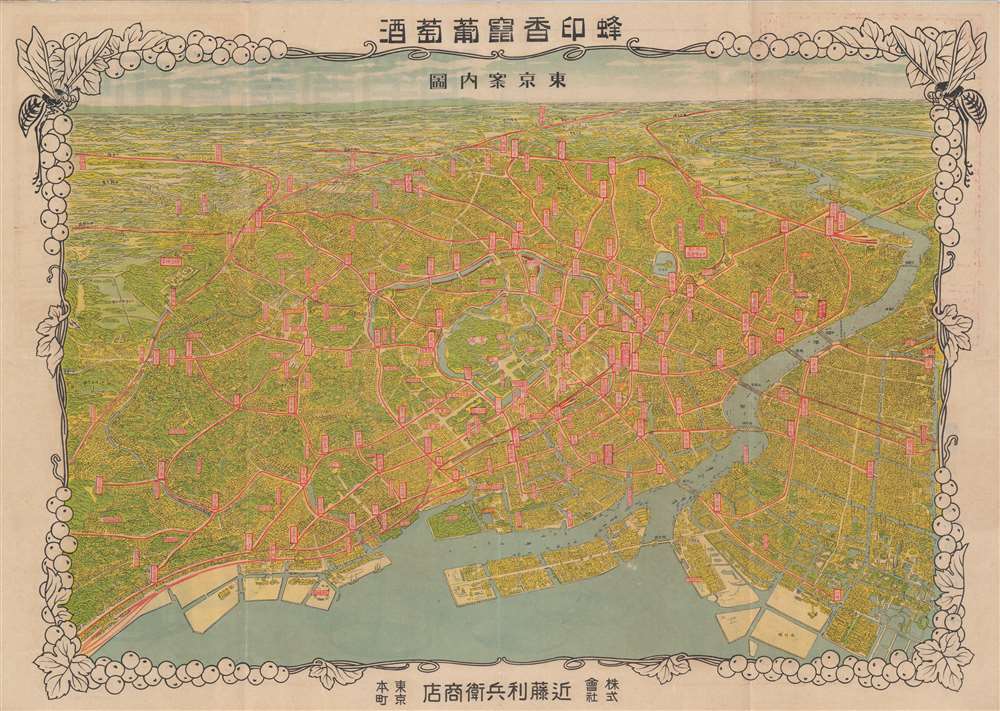 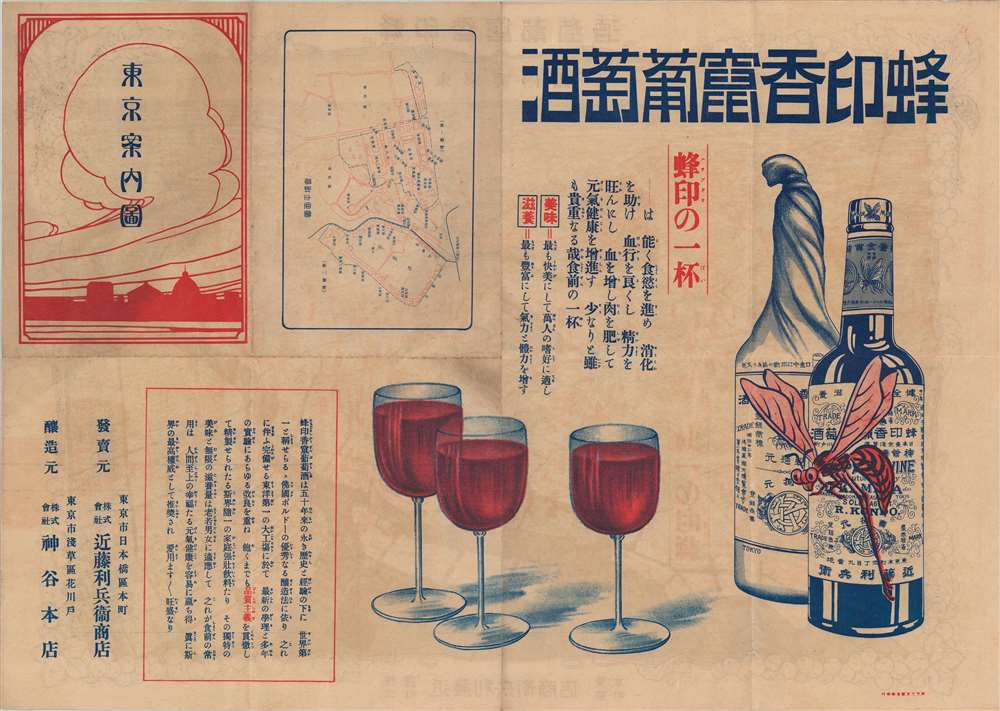 Tokyo transforming into a modern metropolis.
$1,000.00

This rare bird's-eye view map of Tokyo from 1926 was published by Yoshida Kobundo (光文堂吉田印刷所) with a promotional advertisement for 'Bee Brand' fragrant wine (蜂印香竄葡萄酒 / Hachijirushi Kozan Budoshu), a popular drink in the Meiji and Taisho eras. The verso advertisement includes information about the drink and the company that produced it, Kamiya brewery (神谷本店釀造元), the address of the Kondō Rihē Shōten shop where it could be purchased, and an inset map of Ueno Park.

This map faces northwest with the Sumida River in the foreground, and notes (in red-background boxes with white text) the locations of Kamiya's brewery in Hanakawado, Asakusa, the Kondō Rihē Shōten store in Nihonbashi Honcho, and another 'Bee Brand' facility (蜂印墵詰部) in Kyōbashi, perhaps a packaging facility. Major Tokyo landmarks are noted in the white and yellow-background boxes with red text. The Imperial Palace and its Palace Castle (宮城 / Kyūjō) sit at the center. Unlike many bird's eye view maps of Edo and Tokyo, this one does not include Mt. Fuji in the background, so as to show the locations mentioned above.

Tokyo as a Modern Metropolis

The Meiji Era was a period of tremendous change in Japan, particularly in cities, and in Tokyo more than any other. New ideas, technologies, and fashions from abroad were sought out and adopted with incredible rapidity, and in the process were localized to suit Japanese tastes. The Taisho era saw a general liberalization of society, greater experimentation, and a widening of political participation, with universal male suffrage enacted in 1925. Building on the foundations of Tokugawa Edo, Tokyo expanded quickly and, in the process, developed a hybrid style of architecture that resembled the buildings of Victorian London. Many of these buildings were damaged or collapsed in the catastrophic Great Kanto Earthquake in 1923, and this map dates from soon after Tokyo was rebuilt (unfortunately, much of this reconstruction was also destroyed by American bombing during World War II). The map gives a sense of the sprawling metropolis near the end of the Taisho Era, which had spread far beyond the confines of Tokugawa-era Edo, including the heavily industrialized neighborhoods east of the Sumida River (today's Koto City and Sumida City), which were connected to the main city by an increasing number of bridges.

'Bee Brand' wine was the brainchild of Kamiya Denbe (神谷傳兵衛), a Japanese entrepreneur who worked as a young man in a French-run distillery in Yokohama. When Kamiya became ill, the owner of the distillery gave him wine and his health improved. Afterwards, Kamiya became an evangelist for the health benefits of wine and created the 'Bee Brand' of Kozan wine in 1881. The name was inspired by the French brandy Beehive, but the wine itself included ingredients drawn from traditional Japanese medicine, such as herbs, extracts, and honey, symbolizing the combination of Western and Japanese culture that characterized the Meiji period. The drink became extremely popular in the late Meiji era, but several challengers quickly arose who made similar products, while Kamiya shifted his focus to establishing one of the first successful wineries in Japan, in Ushiku. While 'Bee Brand' Kozan declined in popularity during the Taisho period, Kozan wines are still produced in Japan today, including by one company (Godo) that has inherited the label of Kamiya. The advertisement praises the health benefits of the drink, claiming that one cup 'promotes appetite, helps digestion, improves blood circulation, and provides a wealth of energy.' Bee Brand wine would have been appealing to the middle classes of Tokyo who aimed at cosmopolitan sophistication and were curious about foreign products.

This map was published by Yoshida Kobundo (光文堂吉田印刷所), a Tokyo-based publisher. Though undated, the advertisement refers to '50 years of history and experience'; and includes the Eitai Bridge (永代橋), constructed 1923-1926, but not the Kuramae Bridge (蔵前橋), completed 1927, suggesting that this map dates from 1926 or early 1927. The inset map that accompanies the advertisement is of Ueno Park after 1922, when the park hosted the Tokyo Peace Exhibition (平和紀念東京博覽會). Therefore, this map must have been published sometime between 1922 and 1926. A few copies of this map appear on auction websites in Japan and it is held at Stanford University, though theirs is perhaps an earlier edition.