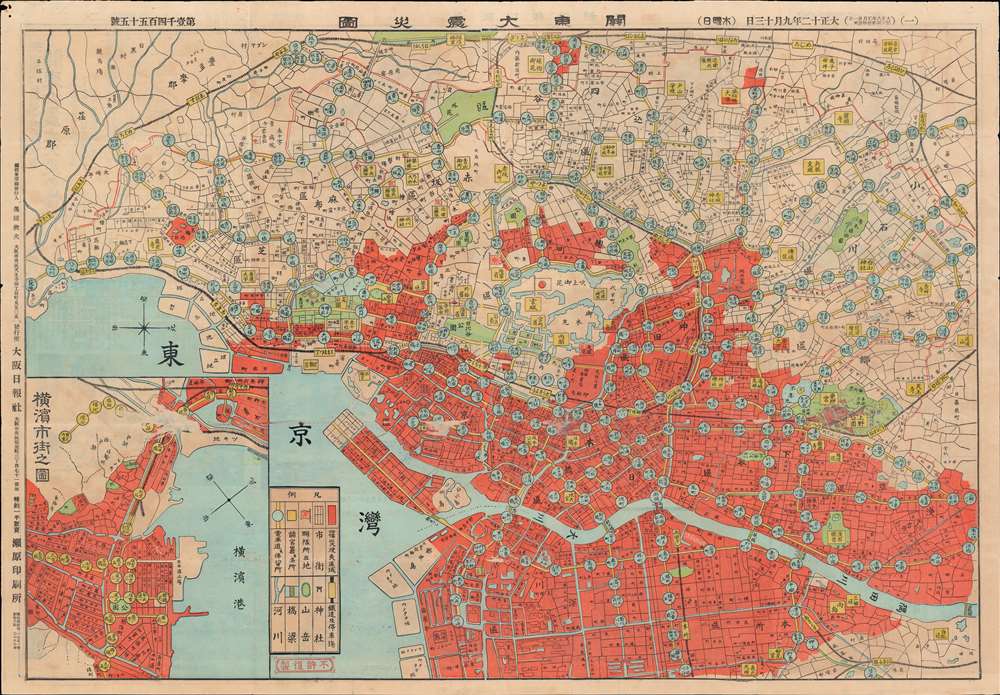 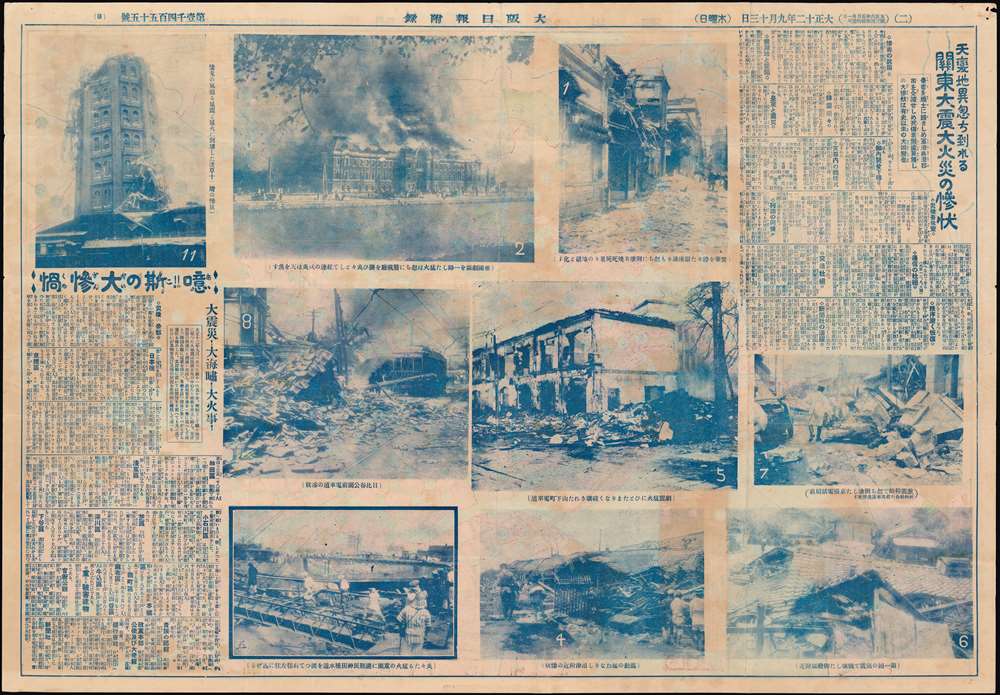 This is a rare and affecting 1923 Kuroda Yoshio (黑田欽夫) map showing the areas of Tokyo and Yokohama destroyed by the Great Kanto Earthquake (September 1, 1923) - just 2 weeks after the events depicted! It is a powerful testament to the devastation, which leveled or burned much of Tokyo and virtually all of Yokohama.

The map is oriented towards the west, with the Imperial Palace (宮城) roughly at center. The most obvious feature is the red shading of neighborhoods in Tokyo and Yokohama, showing areas heavily damaged by the earthquake itself or by the subsequent fire. Most of the oldest neighborhoods of Tokyo that had formed Edo, as well as newer industrialized areas across the Sumida River, were destroyed. The situation was even more dire in Yokohama. On a less gloomy note, the map also denotes the streetcar and railway networks of Tokyo and Yokohama (blue boxes connected by yellow lines and yellow boxes and circles connected by black lines, respectively), as well as government buildings (yellow boxes).

The verso includes descriptions of the initial devastation, discussion of the effects of losing communication and infrastructure, and the reaction of the imperial family and foreign countries. It adds local coverage of the situation in several particularly hard-hit areas of Tokyo and includes several images of the destruction.

Following the earthquake, a false rumor targeting ethnic Koreans spread throughout Japan. As a recently colonized people, Koreans already faced discrimination in Japan, and tensions were heightened by the recent blossoming of the Korean independence movement. The rumors, which stated that Koreans either were responsible for the earthquake or were taking advantage of the disaster, led to a massacre, today known as the Kanto Massacre. Between 6,000 and 10,000 ethnic Koreans died, and the Japanese government imposed martial law in order to protect Koreans. Several prominent socialist and anarchist political figures were also murdered by the Imperial Army and local police in the post-earthquake chaos (the Amakasu and Kameido Incidents).

In light of the damage caused by earthquake, the Japanese government considered moving the capital away from Tokyo and studied several possible sites. Ultimately, they chose to reconstruct Tokyo, which took years. Although rebuilt in the following years, both Tokyo and Yokohama would suffer similar levels of ruin in the final months of World War II at the hands of American bombers.

The Great Kanto Earthquake left deep imprints on Japanese culture and history, and in retrospect presaged the turn towards militarist nationalism, racism, and the collapse of democracy in the following two decades. Also, it is part of a much longer history of natural disasters in Japan, especially earthquakes, tsunamis, and typhoons. Tokyo, Yokohama, and several other cities needed to be almost entirely reconstructed at considerable cost. The earthquake set back the national economy and the government issued emergency 'earthquake bonds' to help businesses survive. When the government proposed to start redeeming these bonds in 1927, it caused a financial panic and many small banks collapsed, causing more economic strain and leaving the large zaibatsu-affiliated banks the sole survivors. This financial crisis caused Japan to experience the Great Depression earlier than other industrialized economies and discredited the political, financial, and bureaucratic elite, to the benefit of militarists and other illiberal forces.

This map was published on September 13, 1923, less than two weeks after the earthquake, and was edited and distributed by Kuroda Yoshio (黑田欽夫) for the Osaka Nipposha (大阪日報社). It was printed by the Sehara Printing Co. (瀨原印刷所). It is held by the National Diet Library and Stanford University. Scarce to the market.

Good. Some verso repairs along original fold lines and at fold intersections.