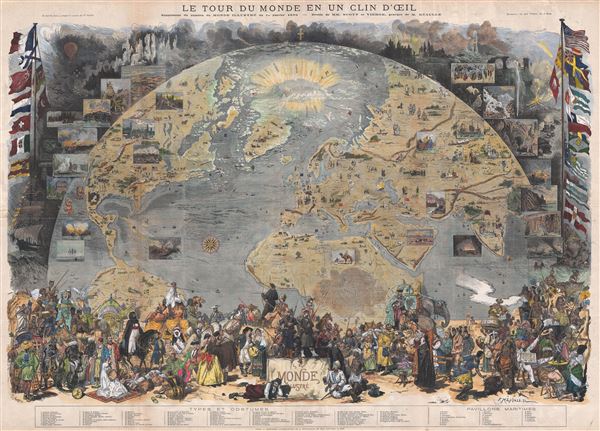 Spectacular view of the World with pictorial illustration.

A spectacular 1876 pictorial diorama presenting a 'tour of the world in the blink of an eye.' The map is projected as a view from space and details the world roughly from the Equator to the North Pole and from California to India. Flora, fauna, historic events, cultural artifacts, and indigenous people are represented pictorially. Additional inset views illustrate places and moments of special interest including mirages in the Pacific, a ship burning at sea, Niagara Falls, Chicago, oil wells, gold mining, Hindu cremation, Chinese Junks, Tuareg warriors, and an avalanche, to name but a few. The presentation is further surrounded by dramatic imagery which includes sketches of some 79 individuals in 'traditional costumes.' To either side of the main view are flags of major nations, sailing ships, volcanoes, and other imagery.

The map itself follows period convention, but a couple of elements are worth noting. These include an ice free polar sea north of Greenland labeled 'Mer Libre?' No doubt this is a nod to hopes that a Northwest Passage might still exist. Trans-Atlantic shipping lanes are noted. The achievements of various explorers are noted in both Africa and the Arctic. The Sargasso Sea is illustrated in the middle of the Atlantic.

This view was drawn by M. M. Scott and Daniel Vierge and Engraved by Fortune Meaulle for the January supplement to Le Monde Illustre, 1878.

Daniel Vierge (March 5 1851 - May 10, 1904) was a Spanish illustrator, draftsman, and watercolorist active in Paris from 1870 to about 1890. Vierge was born Daniel Ortiz y Urrabieta Vierge, son of Spaish draftsman Urrabieta Vicente Ortiz in Madrid, Spain. He studied illustration at the Madrid school of fine arts before moving to Paris. In 1870 he was invited by Charles Yriarte to work of Le Monde Illustrated, a popular French periodicals. He also produced numerous book illustrations, among them, the illustrations for Victor Hugo's L'Annee terrible. Learn More...


Fortuné Louis Méaulle (April 11, 1844 - 1901) was a French engraver active in Paris during the second half of the 19th century. Méaulle worked primarily with woodcuts and engraved for numerous significant Paris illustrators, including Daniel Vierge, Edmond Marchand, Francois, Chiffart, and Henry Meyer, among others. His work appears in numerous issues of Le Monde Illustre as well as Victor Hugo's Les Travailleurs de la Mer. Learn More...

Very good. Backed on archival tissue. Minor wear on original fold lines.
Looking for a high-resolution scan of this?