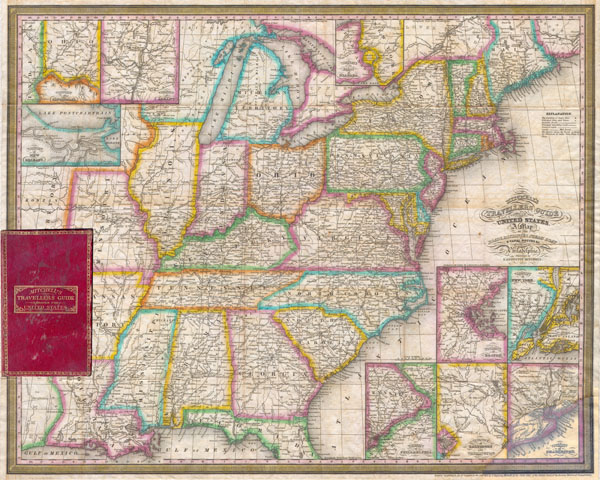 A rare first edition (1832) of Mitchell's ‘Travellers' Guide to the United States. Depicts the eastern half of the United States from Texas (Mexico at the time) and Missouri Territory eastward to the Atlantic. Includes only the northern part of Florida. Labels roadways, major cities, canals, and some geographic features. Made with the traveler in mind. The early part of the 19th century witnessed the westward expansion of European-American toward and eventually beyond the Mississippi. As one of the most popular and inclusive maps of the period, it is no doubt that this map was part of the experience of many westward migrants. In the upper left quadrant three inset mini-maps depicts the Vicinity of New Orleans, the Vicinity of Cincinnati, and the Vicinity of Albany. In the lower right hand quadrant there are five additional inset maps, depicting, the Vicinity of Boston, the Vicinity of New York, The Vicinity of Philadelphia, the Vicinity of Baltimore and Washington and the Vicinity of Charleston. The Great Lake region is shown top center and in excellent detail. Lake Michigan is presented in its distended form. An inset north of Lake Ontario shows the Vicinity of the Falls of Niagara (Niagara Falls). Mitchell first issued this important map and guide in 1832 and issued subsequent revisions and reissues almost yearly until 1849. Accompanied by original red leather binder including a fold out index roughly the same size as the map. Engraved onto a steel plate for printing by Mitchell's associates J.H. Young And D. Haines.