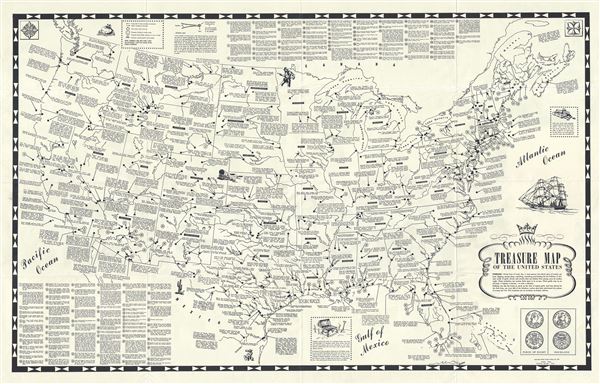 This is a fascinating 1957 treasure map of the United States published by Walker Drake and Sons. Covering the entire country, this map notes numerous sites of buried and hidden treasure from the Rio Grande River to Puget Sound in Washington and from Florida Keys to Maine, included Nova Scotia's famous Money Pit. A legend near the top border notes 'symbols one may find carved on rocks. Left by early Spaniards and Indians.' A diagram and description of a Divining Rod is also included. The lower right quadrant includes a diagram of the faces of the Piece of Eight Coin or the Spanish dollar and the Doubloon.

Legends of buried treasure in the West have always attracted treasure hunters for centuries. This map, however, maps hidden and undiscovered treasure sites in every state of the country. It lists 136 treasure sites along the top and bottom borders keyed by numbers to locations on the map. Additionally notes numerous other treasure sites throughout the map. Some of these include the Blackbeard's treasure on New Providence Island, $1,000,000 of Dillinger loot in a suitcase near Mercer, treasures from ships sunk in the Five Great Lakes, fortunes of Pickett family near Vicksburg before the Civil War, the 'Lost Pegleg Mine,' pirate treasure in Elysian State Park, Los Angeles, and countless more. Information about gold and silver bars and their value, as set by legislation on Jan 31, 1934 is noted near the right border.

A Note near the bottom border states,

Nothing excites the heart of a treasure hunter more than catching sight of a treasure chest, Such chests were not only used by pirates, but by tax collectors as well. Many families buried their flats and silver ware in great chests during wars too.

It a hunter is lucky enough to discover an old hidden chest, he may not find it brimming with jewels and coins as is so often pictured in the movies. Instead, he may find a map leading to another treasure, an old pistol, cutlass, etc. If the chest is empty, it might still be sold as a collector's item-thus repaying the hunter for his time and effort.

The map includes illustrations throughout of a cowboy, a wagon, treasure chests, gold coins, a ship, etc. As the title aptly notes, 'Nothing can stir the heart so much as the lure of buried gold, and here shown for the first time, are over 445 of the fabulous caches that have quickened the pulses of young and old. The Locations are accurate as history allows.' Copyright by Walker Drake and Sons, Inc. 1957, Drake Bldg., Colorado Springs, Colorado.

Very good. Some wear along original fold lines, including minor rips along fold intersections. Blank on verso.
Looking for a high-resolution scan of this?