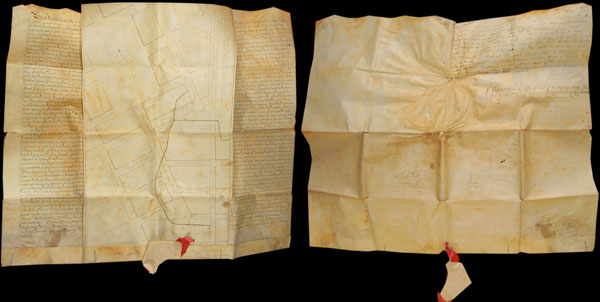 A historic manuscript survey of Tribeca from the 1700s.

This is a rare historic 1796 indenture and associated manuscript survey map documenting the transfer of certain lands in the Tribeca district of Manhattan from the Trinity Church Corporation to the City of New York.

The interesting attached manuscript map, also on vellum, was drawn by the important New York surveyor Benjamin Taylor. Taylor was a contemporary of Goerck and is responsible numerous important 18th century surveys of various parts of this city. The map in question covers modern day Tribeca from Greenwich Street to Church Street (Chapel Street) and from Reade Street to Moore Street. Names numerous early streets including Harrison, Jay, Thomas, Catherine, Barley, Provost and Duane Street. Also notes the Location of Varick Street, which at the time has been built but not named. Shows the locations of several early boundaries and land lots which are mentioned and exchanged in the associate indenture contract.

It would be difficult to come by an earlier or more important piece of original New York City survey work.

Both recto and verso of document are show above.

Benjamin Taylor (1746 - 1832) was a New York city surveyor active in the post Revolutionary War period. Taylor was born in Yorktown, Westchester, New York. He enlisted with the Colonial Army at the age of 16 and served in several wars, including the French and Indian War and the American Revolutionary War. It was most likely during the war that Taylor developed his surveying expertise. After being discharged, on June 9th of 1783, Taylor established himself as contract surveyor in New York city. Taylor's corpus consists of countless surveys of various parts of New York, Brooklyn, Williamsburg, Harlem and Queens. He was a contemporary of Casmir Goerck, another well known surveyor of the period, and it is known that they collaborated on a number of important maps. Taylor is best known for his important map of New York City. He died in Fishkill, Dutchess County, New York in 1832.

Manuscript work on vellum. Two documents. Map is in excellent condition, some toning, original folds. Blank on verso. Indenture is in good condition. Toning overall. Original folds. Some damage and warping near center of document - see image. Manuscript text on both recto and verso.

Dunn, J.P., Briefs and points: in miscellaneous proceedings…, volume 35, page 3.
Looking for a high-resolution scan of this?