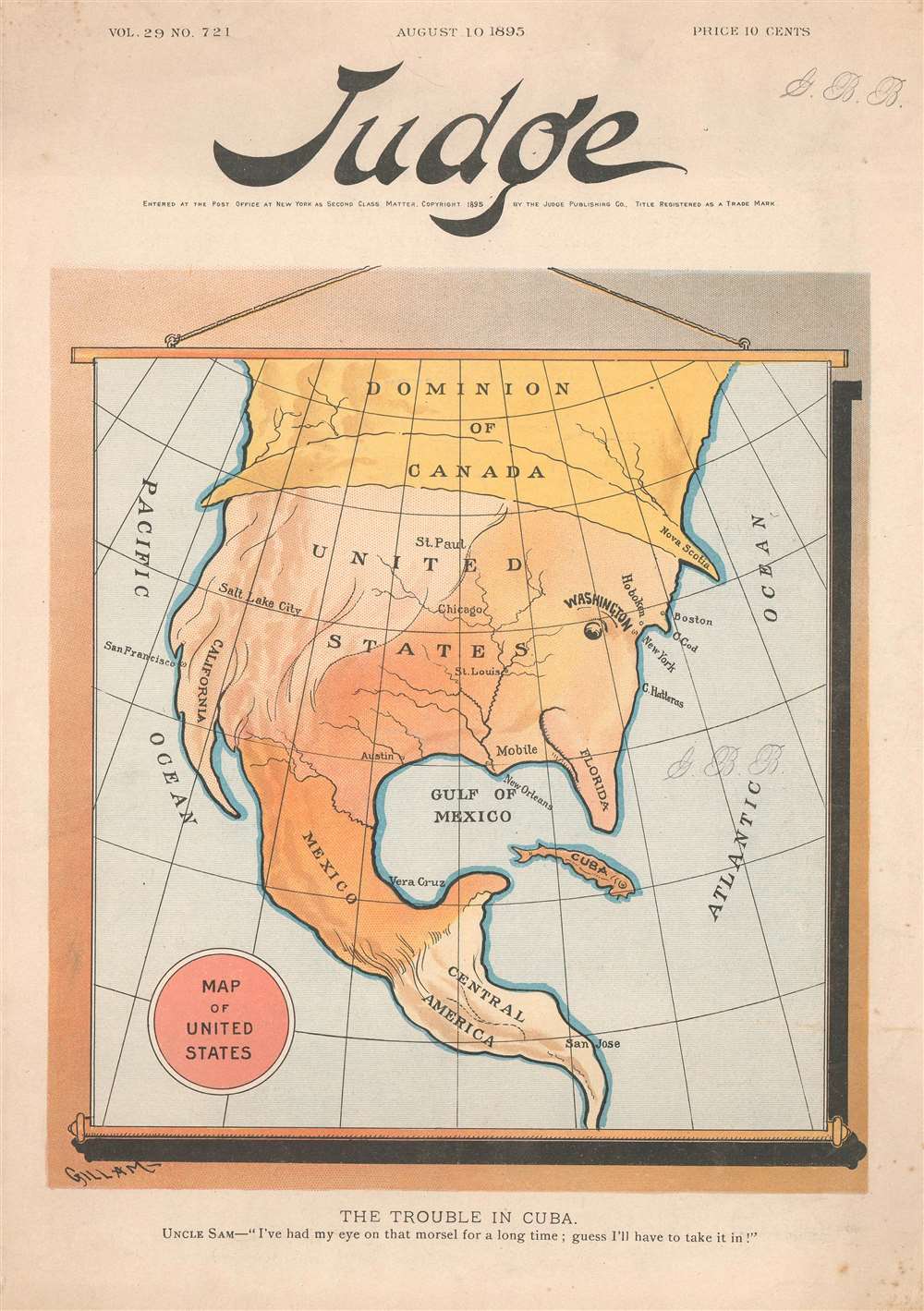 Lampoons America's 'hunger' to annex Cuba even before the Spanish-American War.

This is an 1895 Victor Gillam political cartoon map of North America. Anthropomorphized as Uncle Sam, North America is preparing to eat Cuba, depicted here as a small fish. The United States acts as most of Sam's head, with Washington, D.C. as his eye and Florida as his nose. The western half of the U.S is colored white, to provide the illusion of hair. Canada functions as Sam's hat, while Mexico serves as his mouth and chin, and Central America, again colored white, is his beard. The Gulf of Mexico highlights Sam's gaping mouth and his voracious hunger to consume Cuba. This cover predates the Spanish-American War by two-and-a-half years, when the U.S. would wrest control of the Caribbean island from Spain.

This cartoon map was drawn by Victor Gillam and published on the cover of the August 10, 1895 issue of Judge.

Judge August 10, 1895, Vol. 29, No. 721 (New York: Jude Publishing Company) 1895.     Judge (1881 - 1947) was a weekly satirical magazine published in the United States. The first issue was first printed on October 29, 1881 and was only sixteen pages long. Judge was launched by James Albert Wales, Frank Tousey, and George H. Jessop, who had previously worked for its rival magazine Puck. In the mid-1880s, William J. Arkell purchased the magazine, which was having difficulty competing with Puck. Arkell, taking advantage of his considerable wealth, persuaded cartoonists Eugene Zimmermann and Bernhard Gillam to leave Puck and join the staff at Judge. As Arkell was a supporter of the Republican Party, Judge soon became a platform for criticizing the Democratic administration of Grover Cleveland, which was blamed for the Panic of 1893, among other issues. With support from the Republican Party, Judge saw a rise in popularity during the 1880s and 90s, surpassing Puck in both content and circulation. Judge also widely supported the candidacy of William McKinley, largely through the work of cartoonists Victor Gillam and Grant E. Hamilton. Judge reached its peak circulation of around 100,000 by 1912. One of its former editors, Harold Ross, used his experience at the magazine to launch his own publication, The New Yorker in 1925, which quickly began to compete with Judge. Due to the success of The New Yorker and the Great Depression, Judge became a monthly is 1932 and ceased circulation in 1947.

Good. Some foxing and soiling.
Looking for a high-resolution scan of this?