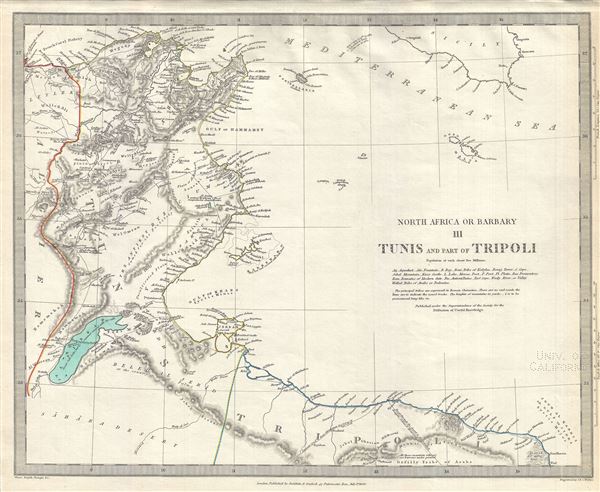 This is a scarce and beautiful 1836 Society for the Diffusion of Useful Knowledge or S.D.U.K. map of Tunisia and Tripoli on the Barbary Coast of northern Africa. It covers from the Annaba in Algeria east including all of Tunisia to Misrata in Libya. Throughout the map identifies various cities, rivers, lakes, early roads, mountains and an assortment of additional topographical details. Elevation is rendered by hachure. Throughout the map includes several annotations regarding the topography and geographical features. The salt lake in southern Tunisia called Alsibkah (Chott el Djerid) is also noted.

Long a hotbed of piracy and a center for the Slave trade, the Barbary coast, including the Maghreb, was being conquered by France as this map was drawn. Frances tenuous conquest of Tunisia and Algeria in 1830 finally ended the threat of the Barbary Corsairs.