1871 Sikkel Manuscript Map of Greece and the Balkans 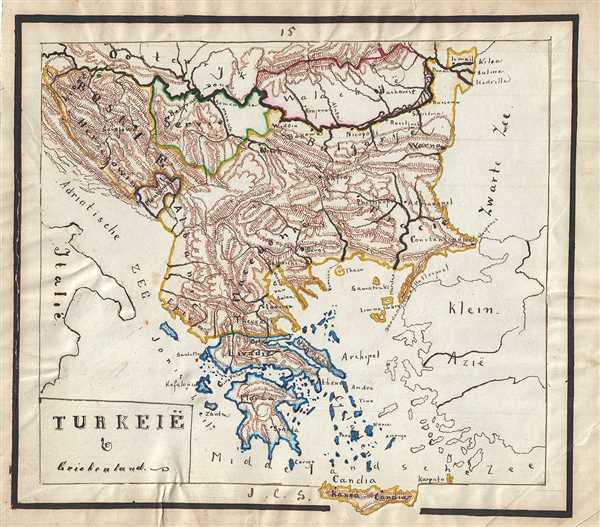 1871 Sikkel Manuscript Map of Greece and the Balkans

Whimsical manuscript map of Greece and the Balkans.
$200.00

This is a lovely 1871 manuscript map of Greece, the Balkans and the European part of Turkey by J. C. Sikkel. Entirely hand-drawn with beautifully rendered topography, the map covers from Romania to Candia or Crete. The modern day states of Greece, Albania, Bosnia, Macedonia, Montenegro, Serbia, Bulgaria and Romania are included. Throughout, major towns, cities, rivers, mountains, etc. are noted.

The map depicts the waning years of Ottoman hegemony in the region, with the Greek nationalist movement attaining independence for the Peloponnese in 1821. The Ionian Republic, under the protection of Great Britain, was also free of Ottoman control. The other Grecian and Balkan states, including Serbia, Croatia, Moldavia, Wallachia, Albania, and Macedonia, remained at least nominally under Ottoman control until 1878.

Very good. Minor spotting. Some edge wear and toning. Creases along margin. Map proper pasted on separate sheet of paper. Left border ripped.
Looking for a high-resolution scan of this?