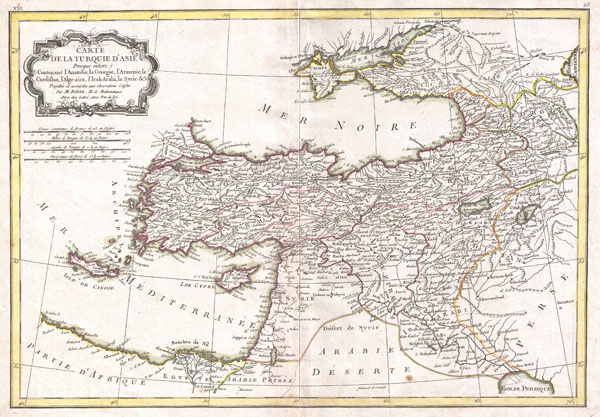 A beautiful example of Rigobert Bonne's 1771 decorative map of Turkey in Asia. Covers from Egypt north to Crimea and from Crete and the Dardanelles east to the Persian Gulf and Georgia. Includes the modern day nations of Turkey, Syria, Cyprus, Iraq, Israel, Jordan, Lebanon, Kuwait, Armenia, Georgia, Azerbaijan and Ukraine. Also notes the disputed lands of Armenia and Kurdistan. Remarkably, this map actually shows the notes but stunning Armenian church on Lake Van's Akdamar Island. A decorative baroque title cartouche appears in the upper left quadrant. Drawn by R. Bonne in 1771 for issue as plate no. 25 in Jean Lattre's 1776 issue of the Atlas Moderne.