1852 Vuillemin Map of Turkey in Europe and Greece 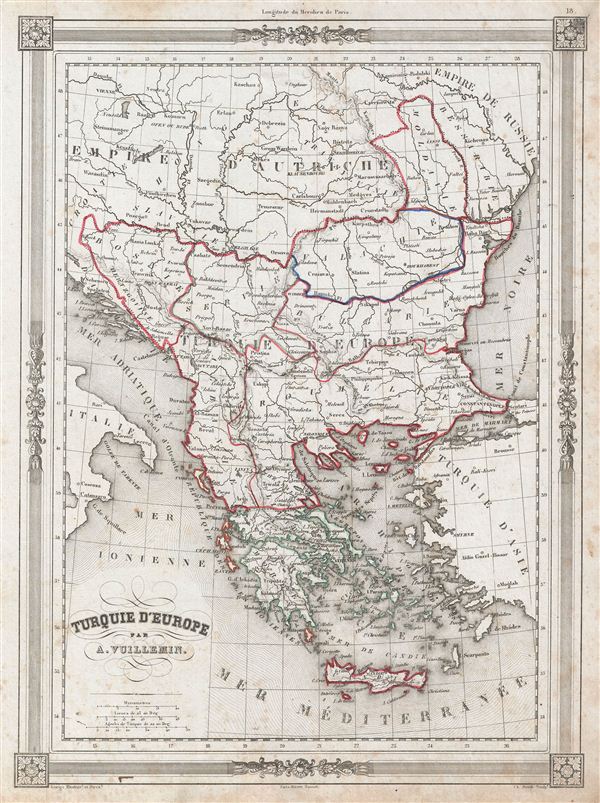 1852 Vuillemin Map of Turkey in Europe and Greece

An uncommon and extremely attractive 1852 map of Turkey in europe and Greece by A. Vuillemin. Centered on the Aegean Sea, this map covers from Moldova to Crete and from the Adriatic to the Black Sea. Also shows part of the Austrian empire (Hungary), Turkey in Asia and Italy. Throughout, the map identifies various cities, towns, rivers and assortment of additional topographical details. This map, made when the Ottoman empire controlled much of the region, covers what is today Turkey, Greece, Bosnia, Serbia, Romania, Bulgaria, Macedonia and Albania. This map depicts the waning years of Ottoman hegemony in the region, with the Greek nationalist movement attaining independence for the Peloponnese in 1821. The Ionian Republic, under the protection of Great Britain, was also free of Ottoman control. The other Grecian and Balkan states, including Serbia, Croatia, Moldavia, Wallachia, Albania, and Macedonia, remained at least nominally under Ottoman control until 1878. The map features a beautiful frame style border. Prepared by A. Vuillemin for publication as plate no. 18 in the 1852 Maison Basset edition of Atlas Illustre Destine a l'enseignement de la Geographie elementaire.