1854 Mitchell Map of Greece and the Balkans 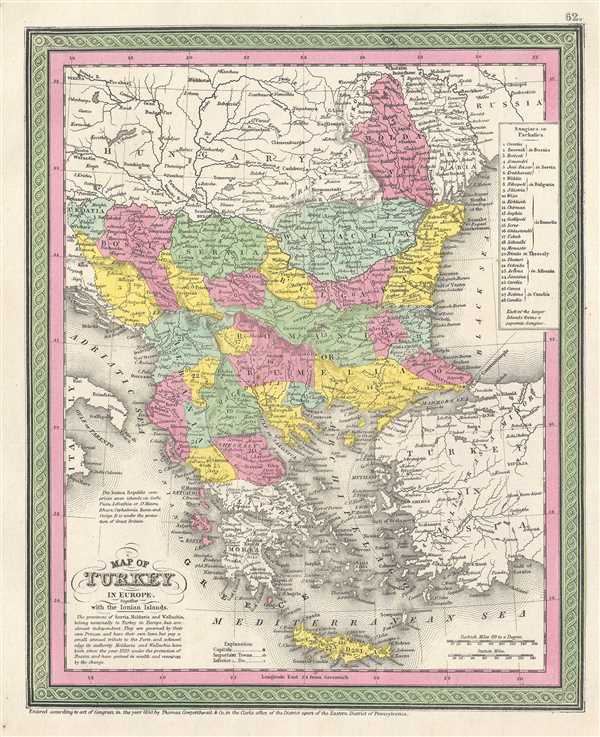 1854 Mitchell Map of Greece and the Balkans

European Turkey during the Ottoman rule.
$150.00

A fine example of Thomas Cowperthwait and S. A. Mitchell's 1854 map of Greece and the Balkans under the Ottoman empire. Centered on the Aegean Sea, this map covers from Moldova to Crete and from the Adriatic to the Black Sea. This map depicts the waning years of Ottoman hegemony in the region, with the Greek Independence movement attaining independence in Peloponnese in 1821. The Ionian Republic, under the protection of Great Britain, was also free of Ottoman control. The other Grecian and Balkan states, including Serbia, Croatia, Moldavia, Wallachia, Albania, and Macedonia, remained at least nominally under Ottoman control until 1878. The whole is engraved in Mitchell's distinctive style with green border work and vivid pastels. Political and topographical features are noted and color coded with elevation rendered by hachure.

This map was prepared by S. A. Mitchell for publication by the Philadelphia firm of Thomas Cowperthwait & Co. as plate no. 62 in the 1854 edition of Mitchell's New General Atlas. Dated and copyrighted, 'entered according to act of Congress in the year 1850 by Thomas Cowperthwait & Co. in the Clerk's office of the eastern District of Pennsylvania.'