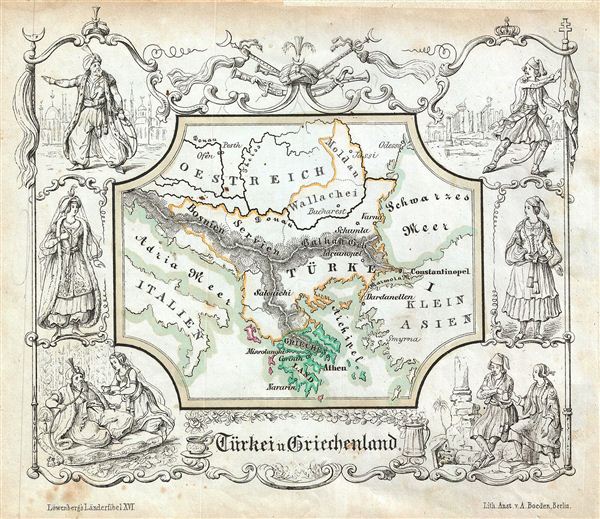 A delightfully whimsical 1846 map of Turkey and Greece, from a German kinderatlas or children's atlas. The map covers Turkey in Europe and Greece from Moldova to Greece. The whole is surrounded by a wide border featuring charming vignettes meant to illustrate the peoples and cultures of the region. These include portraits of two women, one on either side of the map, portraits of men in the top left and right corners, and two illustrations of women offering a drink. The map is accompanied by its adjacent page, which includes a poetic history of Greece and Turkey in German gothic type. The wonderful and rare map was drawn by Anst. V A. Boeden of Berlin for inclusion as plate no. XVI in the 1846 issue of Julius Loewenberg's Geographische Landerfibel.

Julius Loewenberg (1800 - December 12, 1893) was a German Jewish printer, geographer, and author active in Berlin during the middle part of the 19th century. Loewenberg was born in the Duchy of Posen. He attended Yeshiva in Kleczewo (Poland) and graduated to the Protestant Gymnasium of Thorn before moving on to study Christian theology and geography at the Universtiy of Berlin. His works include various atlases, histories, and several translations of the works of Alexander von Humboldt, with whom he was apparently close. Loewenberg died in a Jewish retirement home in Berlin.

Very good. Even overall toning. Blank on verso. Minor stain in left bottom corner.
Looking for a high-resolution scan of this?