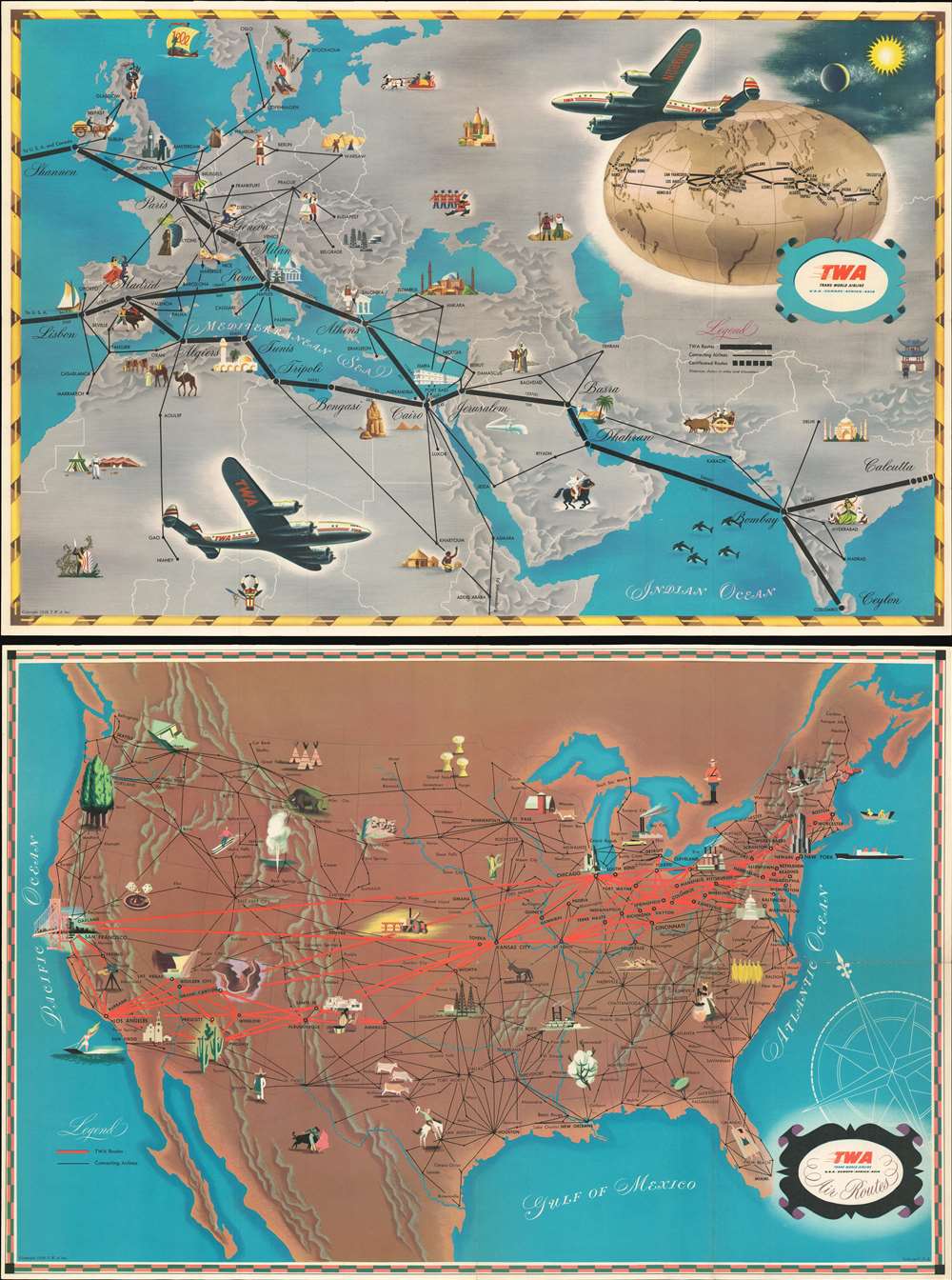 This is a 1948 T.W.A. (Trans World Airline) pictorial airline route map of the world. Printed on both sides of one sheet, the recto (front) presents T.W.A.'s routes, along with connecting air routes, in Europe, northern Africa, the Middle East, and India. The verso (back) highlights T.W.A.'s routes across the United States. Pictorial vignettes emphasize cities with famous tourist sites, such as the Arc de Triomphe in Paris, Big Ben in London, New York's iconic skyline, the Golden Gate Bridge in San Francisco, the Grand Canyon in Arizona, the Hagia Sophia in Istanbul, and the Pyramids at Giza in Cairo. Others are marked by activities, like sunbathing in Nice, skiing in Zurich, and bagpipes in Glasgow. Vignettes also illustrate areas not directly served by T.W.A., predominantly in the U.S., with views of Old Faithful, skiers in the Rockys, the White Mountains of New Hampshire, and a Texan cowboy. A globe on the European map follows all T.W.A.'s major routes around the world, from Hong Kong to Bombay. Two Lockheed L-049 Constellations, then the world's most advanced passenger airplane, adorn the European map. The Constellation's iconic three vertical stabilizers make it one of history's most impressive aircraft.

T.W.A. NC86505 was known by three names. NC86505 crossed the Atlantic as Paris Sky Chief in February 1946. At some point between then and December 1946, NC86505's name was changed to Star of Cairo or Cairo Skychief, the historical record is unclear if one, the other, or both, are correct. NC86505 left Paris-Orly Airport on Friday, December 27, 1946, for the regular flight between Paris and New York via Shannon, Ireland, and Gander, Newfoundland, with twenty-three passengers and crew aboard. The weather in Shannon was not great when the flight arrived around 2 a.m. on the morning of December 28. The pilot believed that he could make the landing, but, on approach to Shannon, lost sight of the airport behind a low hill and, due to a misconnected altimeter, was flying too low. That is when the left wing tip struck the ground, and the plane crashed and caught fire. The plane cartwheeled and broke in two after impact. Nine people died, five passengers and four crew, and none of the survivors escaped without injury. After the investigation, it became apparent that two lines leading to the altimeter had been incorrectly coupled at the last maintenance check before the accident, which resulted in a 'grossly exaggerated indication of height above the ground.' As a result, Lockheed modified the couplings with different screw thread sizes so that it would be impossible for that mistake to happen again. It is unclear why T.W.A. chose to publish a promotional piece with an airplane that crashed illustrated on it over a year after that accident.

This map was created and published by T.W.A. in 1948. Two examples are cataloged in OCLC and are part of the collections at the Library of Congress and the University of Arizona. A third example is part of the David Rumsey Map Collection.

Very good. Exhibits slight wear along original fold lines. Image represents both the recto (front) and verso (back) of a single sheet of paper.