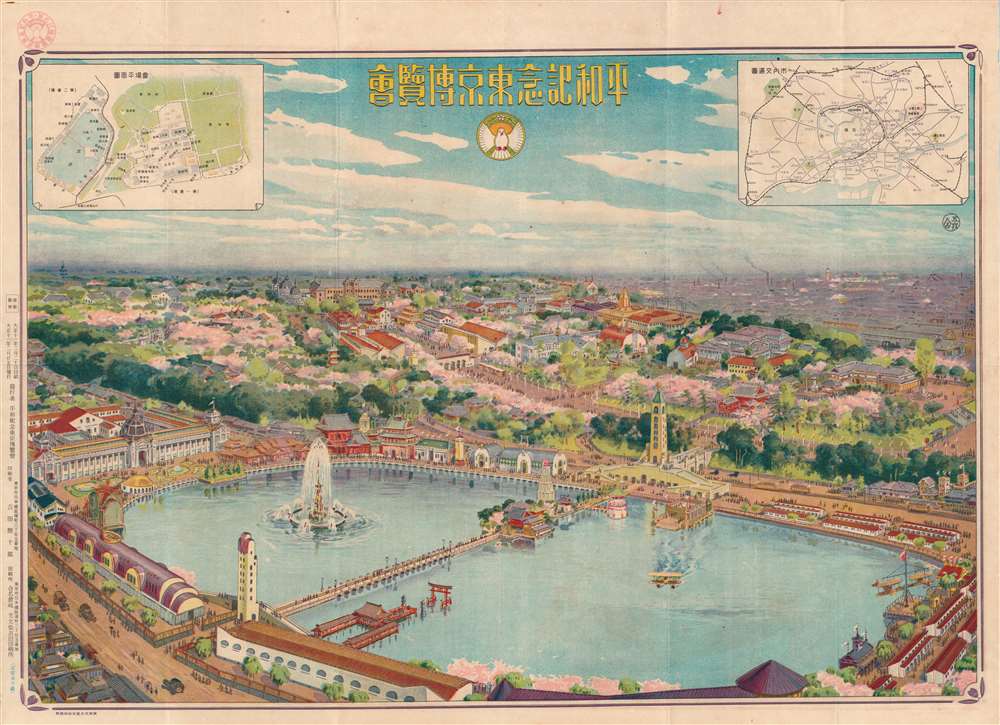 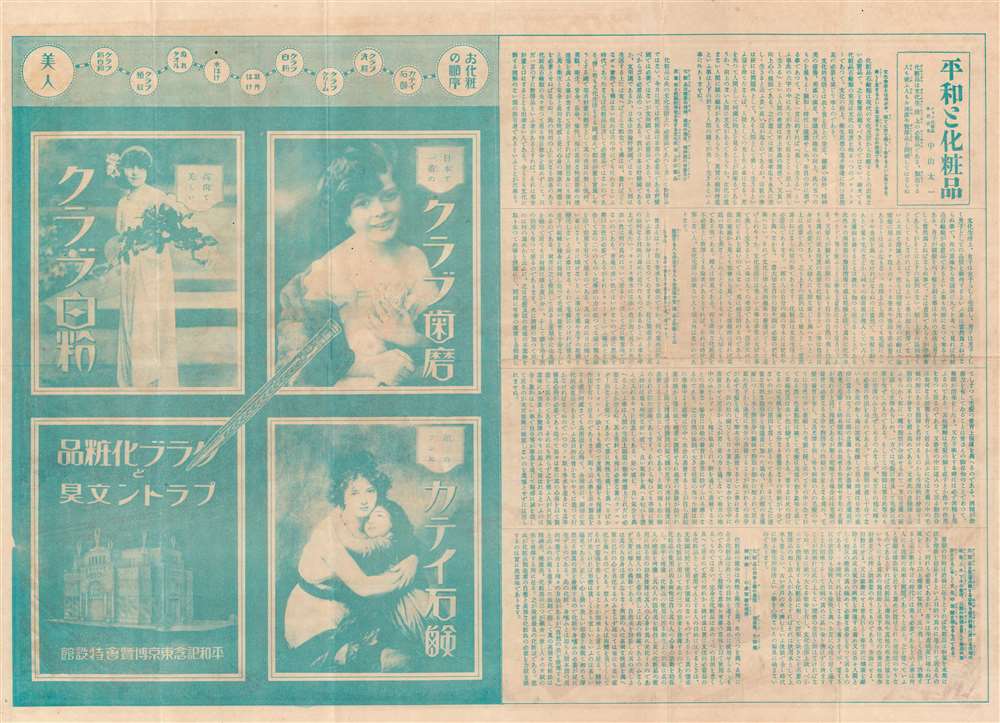 Japan presents itself to the world as a modern powerhouse of industry and development.
$400.00

This is a rare Yoshida Koijūrō 1922 bird's-eye view map of Ueno Park, Taitō, Tokyo, Japan, illustrating the 1922 Tokyo Peace Memorial Exhibition. The view looks towards the northeast, over the Shinobazu Pond (不忍池), with the pavilions and halls of the Peace Exhibition noted in the inset map at top-left. The inset at top-right is a transportation map showing major rail and streetcar lines and stations, including Ueno Station. The exhibition was an opportunity for Japan to demonstrate its technological progress, imperial splendor, and cultural refinement.

The View in Detail

A number of the exhibition's pavilions and facilities were inherited from the Taisho Exhibition (東京大正博覧会) eight years earlier. The pavilions in the foreground are dedicated to industries (mining, forestry, transportation, etc.), while the buildings across the pond are a reflection of Japan's existing colonial empire and future designs, with pavilions dedicated to Taiwan, Korea, and Hokkaido, Sakhalin, and Manchuria-Mongolia. The large Neoclassical building to the left is the Foreign Pavilion (外國館). Further in the distance, to the right-center of the map, are facilities to assist visitors and a police station, along with another group of pavilions dedicated to society, education, the arts, music, agriculture, the sciences, manufacturing, Tokyo itself, and a Peace Pavilion. Visitors could also enjoy the nearby Ueno Zoo, Tokyo National Museum, and the Imperial Library. The buildings to the bottom-right are shops, which is incidentally where Club Cosmetics (クラブ化粧品, based in Hisamatsu-chō, Nihonbashi), which sponsored the production of this view, would have been located. The Taisho and Tokyo Peace Exhibitions were a boon to the emerging Japanese cosmetics industry, which at this time was balancing between traditional makeup styles and increasingly popular Western influenced styles. The pamphlet enclosing the map includes advertising for the company ('A truly ideal make-up that makes you beautiful like a goddess'), as does the verso, featuring photos of Western women. This map and the attached advertisements reflect changing gender norms in Taisho Japan, where women were more likely than in the past to be literate, engaging in consumption, and active in public spaces.

Although it was dedicated to world peace and the memory of World War I (1914 – 1918), the Tokyo Peace Exhibition was similar to earlier international exhibitions in that it was primarily a celebration of technology and empire. The festive mood of the exhibition might have been due to the fact that Japan suffered very little and profited considerably from the First World War. Like the U.S., Japan benefitted economically by providing the Allies with financing, weapons, and supplies, which helped overcome debts from the Russo-Japanese War (1904 – 1905). Japan also gained control of the German concession at Jiaozhou (Qingdao), China, expanded its informal empire in China, and occupied several German territories in the Western Pacific. Japan also tried to position itself as an arbiter of postwar peace, and, as the only major non-Western power, acted as the voice of non-white peoples. However, Japan's effort to have a racial equality clause inserted into the Treaty of Versailles was rebuffed, and Japanese naval ambitions were constrained by the other major victors of World War I at the Washington Naval Conference, hinting at future tensions with the U.S. in particular. Japan also benefitted from the collapse of its old rival, Tsarist Russia, though it did intervene with other Allied powers against the Soviets in the Russian Civil War (1917 – 1922). Although the Soviets eventually won the civil war, Japan gained important intelligence and experience from its Siberian intervention.

The Meiji Era was a period of tremendous change in Japan, particularly in cities, and in Tokyo more than any other. New ideas, technologies, and fashions from abroad were sought out and adopted at an incredible pace, and in the process were localized to suit Japanese tastes. The Taisho Era saw a general liberalization of society, greater experimentation, and a widening of political participation. By the 1920s, Tokyo was a cosmopolitan global city, one of the largest in the world, with all the entertainment, transportation, luxuries, public spaces, and services that such a status would entail. Ueno Park was established early in the Meiji period on land belonging to the Kan'ei-ji Temple and was intended to follow the example of the grandest public parks in major Western cities. Aside from international exhibitions, the park also hosted Japan's first zoo and art museum, and quickly became a popular destination for both Tokyo residents and visitors.

This map was printed by Yoshida Koijūrō (吉田鯉十郎) on February 20, 1922 and published by the Yoshida Kobundo Print Shop (光文堂吉田印刷所), a Tokyo-based publisher, on February 25 the same year. We note an example in the collection at the International Research Center for Japanese Studies (Nichibunken) but is scarce on the market.

Yoshida Koijūrō (吉田鯉十郎; c. 1907 - 1923) was a cartographer and publisher based in Tokyo. He worked with the Yoshida Kobundo Print Shop (光文堂吉田印刷所), which still exists as 吉田印刷株式会社. Learn More...