1825 Schoolgirl Map of the United States 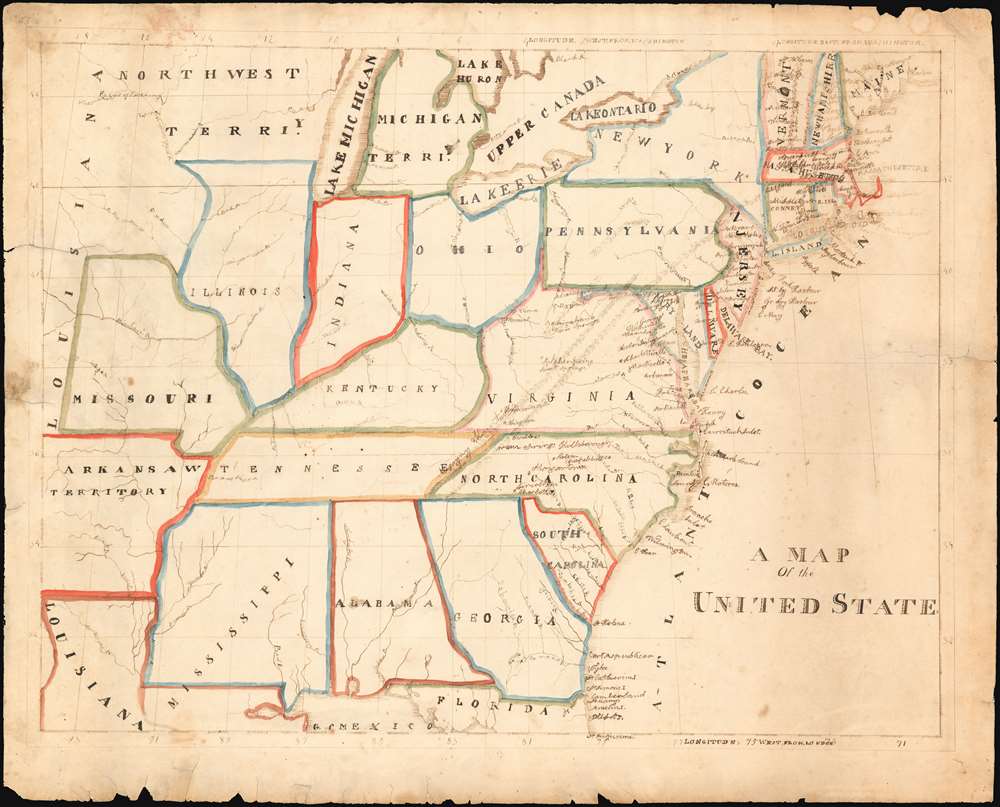 1825 Schoolgirl Map of the United States

This unsigned manuscript map of the United States was executed in the late 1820s or early 1830s by one or more American schoolchildren. Such so-called 'schoolgirl maps' were a popular means of teaching geography, history, draftsmanship and penmanship in the first half of the 19th century both in the United States and Great Britain, and often provide insight into the historical period overall, and the daily life of the young producers of the artifact. It depicts the United States of the early 19th century, in its first expansions beyond the Mississippi.

Schoolgirl maps were often signed and dated; in this case neither is true. It is no earlier than 1825: the paper was high-quality wove paper from the illustrious Whatman paper mill, who added dates to their watermarks. This sheet is watermarked 1825. The latest probabledate for the production of this map is 1836. The Arkansaw Territory (not a misspelling, but an alternate official name for the Territory chosen to reinforce the proper pronunciation) was admitted to the Union as a state in 1836. We lean towards an earlier assessment of the date, based on a key archaism in a place name: Port Royal, SC is referred to here as Port Republican - a name used in honor of the French Republic (as opposed to the France's monarchy, or Imperial France) a gesture associated with the United States' friendship with France in general, and the politically outspoken Lea family's friendship with the Marquis de Lafayette in particular. (Lafayette was an early patron of the elder Lea, and had returned to tour the United States in 1822). 'Port Republican' appears extremely rarely in print, most frequently in works printed by Carey and Lea, and seemingly not at all after 1829. We have not seen the name used on any commercial map other than the 1822 Carey and Lea United States, which we strongly suspect provided most of the source material for the students producing the manuscript.

As with most schoolgirl maps, this is executed on paper with pen, ink and watercolors. Mountains and coastlines are indicated with simple, elegant hachure. The quality of the lettering varies wildly, suggesting to us that more than one student was at work here. Some efforts were taken for the capital letters used for the states and for major bodies of water; somewhat less care was shown for the handwriting for river names. The unruly cursive employed for city names cannot have come from the same person who did the mountains. The map's painstaking title lettering nearly achieves glory, only to fall short at the last letter: insufficient planning results in the border curtailing the last letter: hence the title 'A MAP Of the UNITED STATE.' In a last ditch effort at completion, one of the students involved has added the missing 's' in miniscule subscript.

While the use of mapmaking in teaching is first seen in Europe, mainly England, the Schoolgirl Map became a peculiarly American pedagogical tool in the first part of the 19th Century, a period in which standards and purposes in women's education were changing. While boys were frequently taught the practical execution of surveys and charts, the production of attractive and informative maps appears to have been primarily the domain of young women. Such maps can be found of the World, the United States, or more specific maps of states. These were usually based on generally available reference maps, such as those found in the atlases produced by Carey and Lea, Finley, and Mitchell.

The goals of these exercises were more far-reaching than teaching geography. Girls learned penmanship, each map often using three or more lettering styles. Mapmaking sharpened the retention and recall of factual information. Students were encouraged to take pains in their draftsmanship, and often achieved beautiful flourishes of artistic expression in their maps. But most peculiar to the American iterations of educational mapping was the goal of instilling a sense of civic pride and responsibility. Indeed, the key desired result of the education of girls in the post-Revolutionary-War United States was to prepare for the education of the next generation of American citizens, a patriotic duty which would primarily fall on the shoulders of these young women.

Good for this kind. Lightly toned. Several mended marginal splits and reinforcements with no loss to image. Few marginal water stains.
Looking for a high-resolution scan of this?