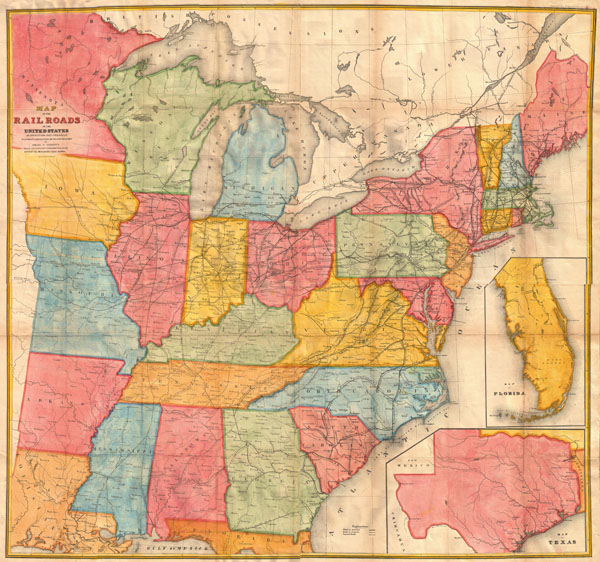 A rare and attractive wall sized railroad map of the United States issued in 1852 for Israel de Wolf Andrew's report for the Treasury Department. Depicts from the Great Lakes south to the Gulf of Mexico, and from the states of Iowa, Missouri, Arkansas and Louisiana eastward to the Atlantic. Inset maps focus on Florida and Texas. Offers superb detail of the American railway network, both extant and proposed, at a critical juncture in U.S. history. Essentially an updated version of McLellen's map of 1850. Drawn and engraved under the direction of the editor of the 'American Railroad Journal.'

Israel de Wolf Andrews was the Consul of the United States for Canada and New Brunswick from 1851 - 1854. Little else is known about this elusive figure. Learn More...

Communication from the Secretary of the Treasury, transmitting in compliance with a resolution of the Senate of March 8, 1851, the Report of Israel D. Andrews, consul of the United States for Canada and New Brunswick on the Trade and Commerce of the British North American Colonies, and upon the Trade of the Great Lakes and Rivers; also, notices of the internal imporvements in each state, of the Gulf of Mexico and the Straits of Florida, and a Paper on the Cotton Crop of the United States., (1852 editon).

Modelski, Andrew M., Railroad Map of the United States: A Selective Annotated Bibliography of Original 19th-Century Maps in the Geography and Map Division of the Library of Congress, 25. New York Public Library, Map Div. 01-5292 (McLellan edition). Library of Congress, Map Division, G3701.P3 1852 .A52 RR 25.
Looking for a high-resolution scan of this?