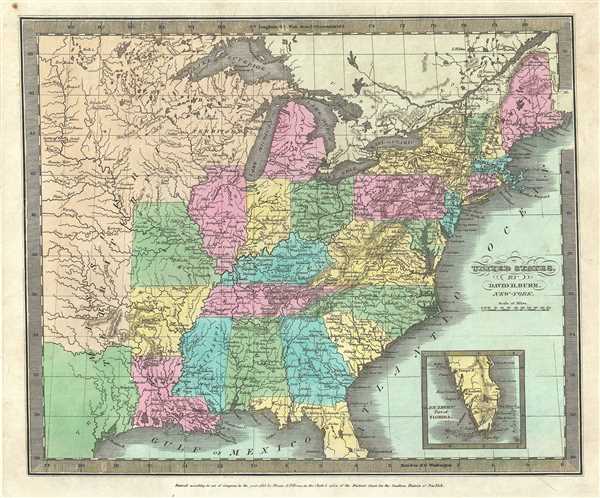 This is a beautiful first edition 1833 map of the United States by David H. Burr. It covers the United States from the Atlantic seaboard westward as far as Missouri Territory and from the Great Lakes southward to the Gulf of Mexico and Florida. The southern part of Florida appears in an inset in the lower right quadrant. Labels roadways, major cities, rivers, canals, and other topographical and geographical features. An early state and territorial configuration is presented with a unified Virginia and Wisconsin identified as the Huron Territory. The vast territory explored by Lewis and Clark is here identified as the Missouri Territory, which extend westward off the map. Lake Michigan is presented in its distended form.

According to Ristow, although Burr is credited on the title page, he left this atlas incomplete. He was appointed as topographer to the U.S. Post Office, and of the sixty-three maps finally included in this atlas, only completed eight. The rest of the maps were then completed by Illman and Pilbrow in Burr's style. The map was ‘Entered according to act of Congress in the year 1833 by Illman and Pilbrow in the Clerk’s office of the District Court for the Southern District of New York’, but not published until the atlas was released in 1835. Published by D. S. Stone in Burr’s New Universal Atlas.