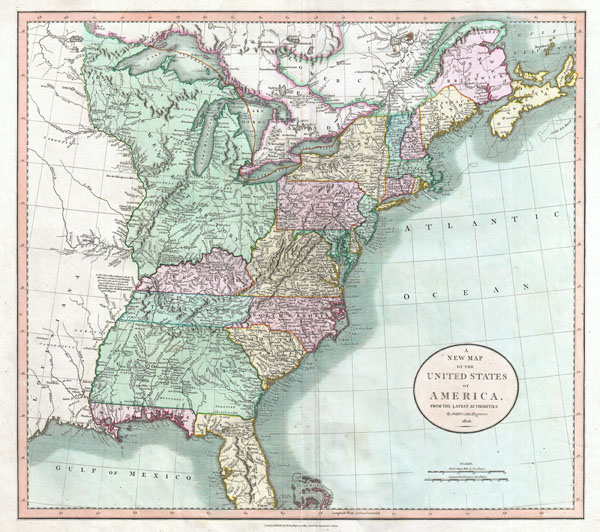 Published by John Cary in 1806, this is one of the most interesting atlas maps of the United States to appear in the early 19th century. Covers the entire United States east of the Mississippi River as well as parts of the Louisiana Territory and Canada. Much of the northwestern part of the United States is enclosed in the gigantic 'Western Territory' encompassing all of modern day Ohio, Indiana, Michigan, Wisconsin, Illinois and parts of Minnesota. This area was largely the preserve of American Indian tribes and the occasional fur tapper. Notes many of the American Indian Nations occupying the territory north of the treaty line as defined by General Wayne in 1795. Further south, Georgia is shown extending westward as far as the Mississippi River despite the creation of the Mississippi Territory in 1798. Florida is divided at the Apalachicola River into eastern and western sections. West Florida, ostensibly part of the Louisiana Purchase, was claimed by the Spanish and remained under their control until 1812. Includes copious notes throughout on river navigation, fur trading stations, roads, and forts. All-in-all a wonderful example of a rare and important map of early United States. Prepared in 1806 by John Cary for issue in his magnificent 1808 New Universal Atlas.