1851 Case Tiffany and Company Map of the United States 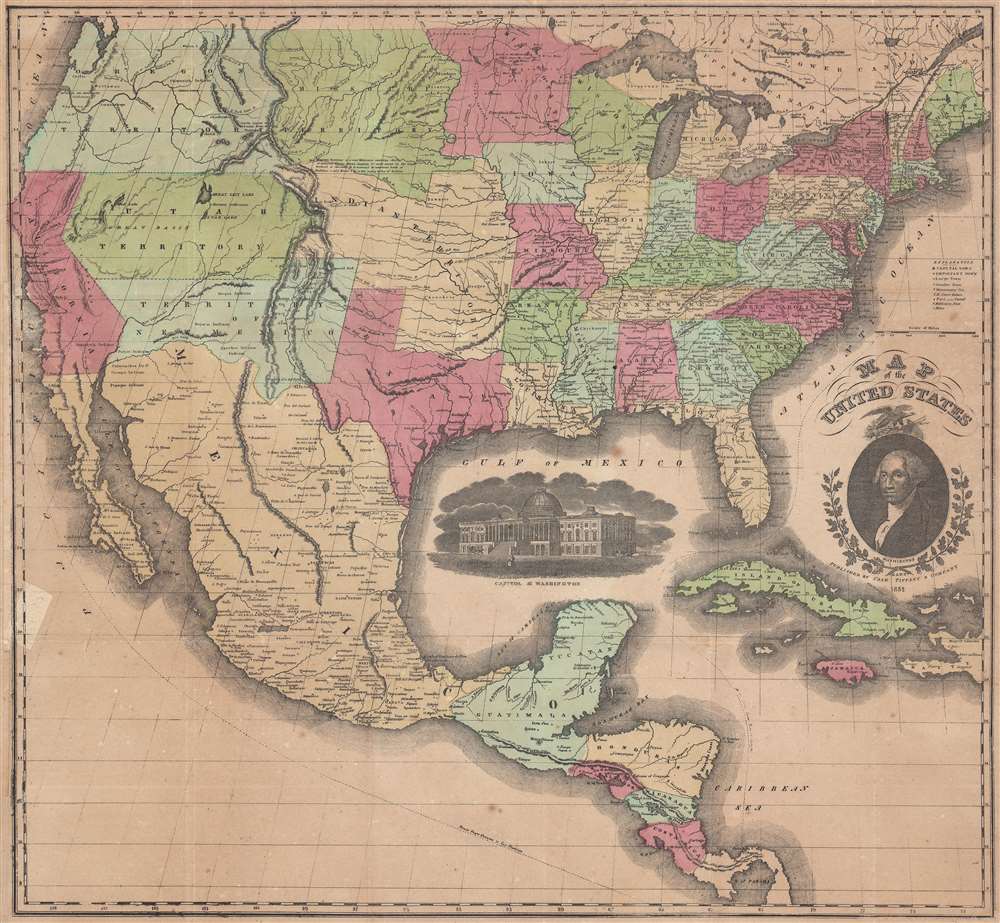 1851 Case Tiffany and Company Map of the United States

Features an ephemeral depiction of the American West.
$900.00

This is an 1851 Case, Tiffany, and Company map of the United States featuring an ephemeral, if slightly outdated, configuration of the American West. The map depicts the region from the Pacific Ocean to the Atlantic Ocean and from Canada to Panama. Created during the westward expansion of the United States, the geography of the American West is presented in one of its many different, highly ephemeral configurations.

Texas is illustrated in a unique configuration, as is the New Mexico Territory, using the Gila River as the border between the Territory and Mexico. The Utah Territory and the Oregon Territory are depicted in a more classic configuration. Minnesota and Iowa are expanded beyond their current borders, as is Wisconsin. The Missouri Territory has been cut in half, occupying only the northern half of the American Plains. The southern portion of the Missouri Territory is labeled as Indian Territory. Between the Louisiana Purchase of 1803 and the Indian Appropriations Act of 1871, Indian Country slowly eroded from its largest extent between the Mississippi River and the Rocky Mountains as it is shown here to the majority of the modern-day state of Oklahoma. When the Oklahoma Territory was created in 1890, Indian Territory ceased to exist.

Highly detailed, myriad cities and towns are labeled throughout the eastern United States, including state capitals and Washington, D.C. States are shaded different colors to allow for easy differentiation. Rivers, lakes, and mountains are also illustrated and labeled. A portrait of George Washington is situated on the lower right and an illustration of the Capital Building is included in the Gulf of Mexico.

The framework for the present map appears to have been acquired by several different publishers during the nineteenth century. The earliest map that bears a striking resemblance to this 1851 Case, Tiffany, and Company publication is the 1826 Huntington and Willard map of the United States. Issued as a wall map, this map of the continental United States illustrates the eastern part of the country in much the same way as the present map and includes a nearly identical title cartouche and portrait of Washington. Then, the plate for the Huntington and Willard map was acquired by Willis Thrall in 1829, who revised it slightly and republished it under his own imprint. Finally, Case, Tiffany, and Company acquired the plate from Thrall sometime before 1850, when the firm issued the first edition of its map of the United States, which was derived from Thrall's map. As such, this 1851 Case, Tiffany, and Company map of the United States is the second edition.

We have been able to locate examples of this edition in four institutional collections. It is scarce on the private market.

Case, Tiffany, and Company (fl. c. 1837 - fl. c. 1857) was an American publisher based in Hartford, Connecticut active during the mid-19th century. Among the firm's publications were maps, books, and pamphlets. Learn More...