1860 Garnier Map of the United States 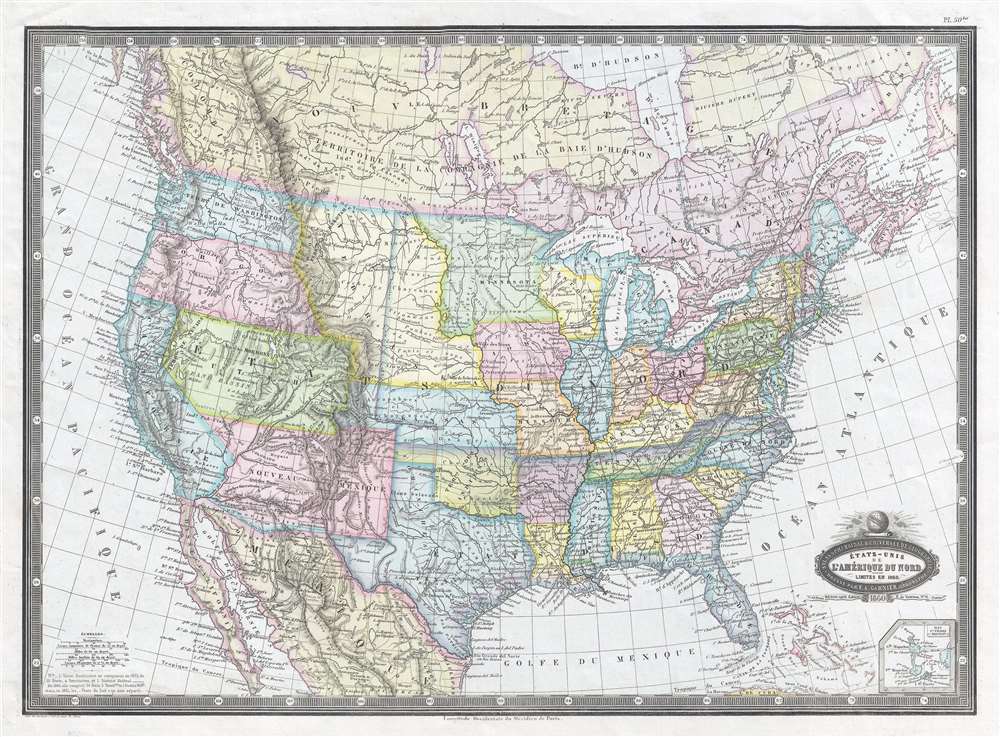 1860 Garnier Map of the United States

One of the rarest and most decorative mid-19th century French maps of the United States.

This is a strikingly beautiful 1860 F. A. Garnier map of the United States and depicts the U.S. from the Pacific Ocean to the Atlantic Ocean and from Canada to Mexico. Beautifully colored, this map displays several aspects of classic American territorial cartography. Both the Washington and Oregon Territories stretch from the Pacific to the Rocky Mountains, while Nebraska extends from its border with Kansas (which also reaches the Rockies) to the Canadian border. New Mexico is illustrated in its original territorial configuration, while Utah encompasses territory from California to the Rockies. Utah is referred to as 'Pays des Mormons' (Land of the Mormons) and the Nevada Territory, presaging the creation of Nevada. There is also a reference to the State of Deseret in the Utah Territory. Deseret was a provisional state proposed by Mormon settlers in 1849. Though it existed for a little over two years, it was never recognized by the government of the United States. Another curiosity present here is the inclusion of a pseudo-border around the Southern states, which the following year would become the Confederacy. Even though this map is dated 1860, a note in the bottom left corner references the American Civil War and the secession of the Southern states, explaining the inclusion of the border.

Highly detailed, myriad roads and railroads are illustrated throughout the Eastern states, and trails crossing the west are also noted. Cities and towns are labeled throughout, as are the ranges of numerous American Indian tribes in the west. Rivers, lakes, and mountain ranges are also illustrated. Outside the borders of the U.S., Canada is divided into Canada in the east, and the Territory of the Hudson Bay Company in the west, along with British Columbia.

This map was created by F. A. Garnier in 1860 and published by the Veuve Jules Renouard in Garnier's Atlas Spheroidal et Universel de Geographie in 1862.

F.A. Garnier (1803 - 1863) was a French cartographer who published the Atlas sphérpidal et universel de géographie in 1862 as his only work. It is said that he spent fifteen years creating the maps for the atlas.