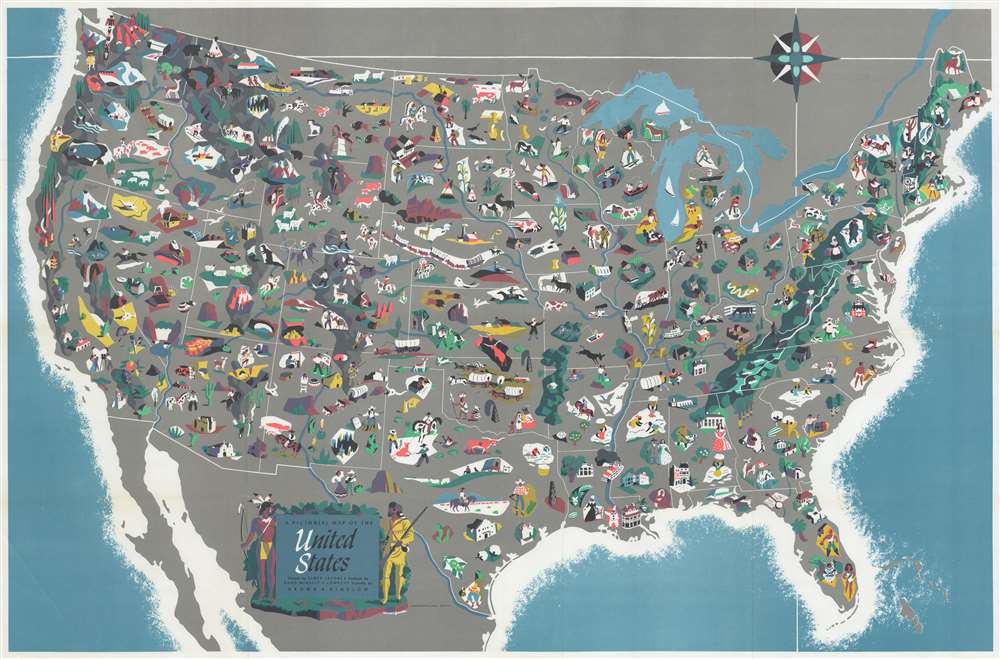 This is a 1944 Elmer Jacobs pictorial map of the United States. Beautifully illustrated vignettes populate the continental U.S. from coast to coast and highlight aspects of American history, everyday life, and the country's natural beauty. Among these are illustrations of the Grand Canyon in Arizona, Mesa Verde in Colorado, and Crater Lake in Oregon. Historical references include illustrations of the Oregon Trail in Nebraska and Oregon, the Alamo in Texas, and the U.S. Capital in Washington, D.C.

This map was created by Elmer Jacobs and published by Rand McNally as a folding map in a pouch at the end of a book / atlas entitled This is My Country. A single example of the separate map is cataloged in OCLC as part of the collection at the University of Michigan. The book is cataloged in OCLC at eight institutional collections.

Elmer Jacobs (May 9, 1900 - 19xx) was an American painter and draftsman. Born in Streator, Illinois, Jacobs was a largely self-taught artist. Jacobs worked for himself as a free-lance artist and his most well known clients included Rand McNally and Company, the Chicago Tribune, John Morrell and Company, and R.R. Donnelly and Sons. He illustrated the award winning Phoenix Flame from 1940 until 1952. The Phoenix Flame had been an in-house publication for the Phoenix Metal Cap Company until it was turned into a promotional magazine. He also created work for the Encyclopaedia Britannica, the American Bible Society, and Caterpillar Tractor. He produced beautiful covers for the Chicago Sunday Tribune Magazine of Books. Learn More...