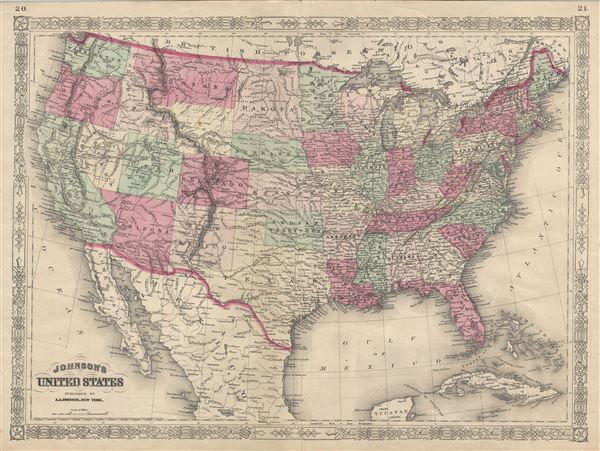 Map of the United States just after the close of the American Civil War.

This is A. J. Johnson's 1866 map of the United States. It covers the entirety of the United States as well as adjacent parts of Canada and Mexico, revealing the country at a critical historical junction just following the American Civil War. Most states are depicted much as they exist today, with a few notable exceptions: Arizona extends westward into what is today the Las Vegas region of Nevada; Dakotas are a single large territory; Oklahoma is still named the Indian Territory; and Wyoming has a western panhandle extending into what is today Montana. Several important transcontinental routes are noted including the four proposed routes for the Pacific Railroad: Gov. Stevens route or the Northern Pacific Route, the Central Pacific Route, the Union Pacific Route, and the Southern pacific Route. The map also notes the course of the Santa Fe Trail, the Pony Express or U.S. Mail Route, and the tracks of Fremont and Marcy.

The map features the fretwork style border common to Johnson's atlas work from 1863 to 1869. Although copyrighted to 1864, this map was published by A. J. Johnson as plate nos. 20 and 21 in the 1866 edition of his New Illustrated Family Atlas of the World.