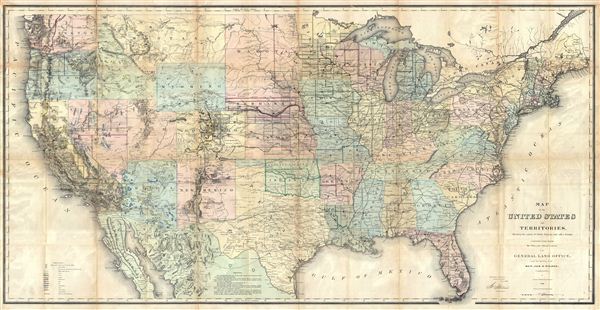 Map of the United States and Territories, Showing the extent of Public Surveys and other details, constructed from the Plats and official sources of the General Land Offices, Under the direction of Hon. Jos. S. Wilson, Commissioner by Joseph Gorlinsi, Draughtsman, 1868.
1868 (dated)     30 x 56 in (76.2 x 142.24 cm)

This is an extremely interesting 1868 U.S. Land Office map of the United States. Covering the entire country on a rectangular projection, this map is intended to illustrate the extant of the Land Survey as it worked its way westward. In this map the surveyed areas are subdivide by tiny squares, those marked with an + are near the outer limits of the survey, while those marked with an o are not yet subdivided. This map also illustrates mineral deposits throughout the country with the rich gold and silver deposits in California, Colorado, Arizona, Nevada, and Montana clearly noted. The map also notes some topographical features, American Indian territories, the locations of fortifications and land offices, major and minor cities, transcontinental and local railway lines, and the routes taken by notable military expeditions and explorers. This map was prepared and accompanies the Report of the Commissioner of General Land Office for the Year 1868.

Good. This map, like all Land Office Report maps is printed on very thin paper and was folded into the back of the accompanying book. Most examples suffer from extreme condition issues due to the size and print quality of the map. This one is better than most, exhibiting average brittleness and only minor loss at fold intersections and discoloration along original fold lines. Like most examples, splitting along the fold lines has become an issue and in many cases archival verso reinforcement is evident. That said, this map will display beautifully in a proper frame. Accompanies the Land Office Report.
Looking for a high-resolution scan of this?