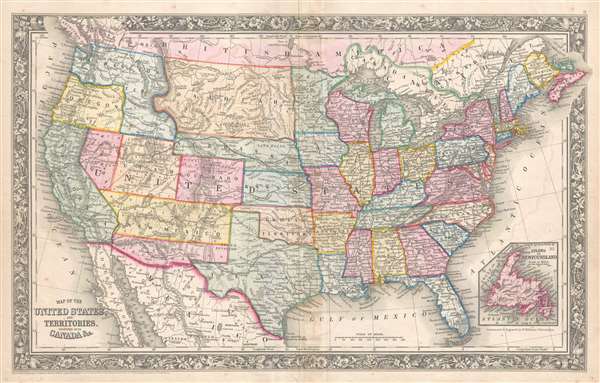 Depicts the ephemeral Confederate Arizona Territory and is one of the first maps to illustrate Colorado.

This is a Samuel Augustus Mitchell, Jr. map of the United States during the first year of the American Civil War which illustrates the ephemeral Confederate Arizona Territory and is one of the first maps to include the newly-formed Colorado Territory and Dakota Territory. Depicting the continental United States from the Pacific Ocean to the Atlantic Ocean and from Canada to Mexico and the Gulf of Mexico, this map captures the unique and volatile nature of the year 1861 in the history of the United States.

Confederate Arizona was a territory claimed by the Confederate States of America from 1861 until 1865. The idea for an Arizona Territory appears as early as 1856, when the government of the Territory of New Mexico began to express concerns about being able to effectively govern the southern part of the territory, as it was separated from Santa Fe by the Jornada del Muerto, a particularly unforgiving stretch of desert. The New Mexico territorial legislature acted on these concerns in February 1858, approving a resolution in favor of creating an Arizona Territory, with a north-south border to be defined along the 32nd parallel. Impatiently waiting for Congress to approve the creation of the new territory, 31 delegates met at a convention in Tucson in April 1860 and drafted a constitution for the 'Territory of Arizona', which was to be organized out of the New Mexico Territory below 34th parallel. The convention even elected a territorial governor and a delegate to Congress. Congress, however, was reluctant to act. Anti-slavery Representatives knew that the proposed territory was located below the line of demarcation set forth by the Missouri Compromise for the creation of new slave and free states, and they were not inclined to create yet another slave state. Thus, Congress never ratified the proceedings of the Tucson convention, and the Provisional Territory was never considered a legal entity.

The year 1861 saw major territorial changes in the northern plains. The Kansas-Nebraska Act, signed on May 30, 1854 created the Nebraska Territory, which originally stretched from the 40th parallel to the 49th parallel and from the Continental Divide to the White Earth and Missouri Rivers. In 1861, however, both the Colorado territory (which was formed on February 28) and the Dakota Territory (created on March 2) were created out of land originally part of the Nebraska Territory. Thus, this map is the first Mitchell map to illustrate the state of Colorado (as its territorial boundaries and its state boundaries are the same) and the Dakota Territory. Nebraska's extended panhandle would be lost in 1863, with the formation of the Idaho Territory, which would also include all the land in the Washington Territory east of Washington State's modern-day eastern border.

Communication, Transportation and Other Notations

Aside from illustrating the incredible historical moment detailed in the proceeding paragraphs, this map contains numerous other important elements. One such element is the illustration of the route of the Pony Express, a transcontinental mail route consisting of 186 different 'stations' separated by ten miles operated by 120 riders and over 400 horses. Operating for eighteen months, the Pony Express was the main communication route to California after the beginning of the Civil War until October 24, 1861, when the first transcontinental telegraph was established. The rail network throughout the United States is also illustrated. It appears that lines that were in operation in 1861 are illustrated by dark black lines, while proposed routes are indicated by dashed lines due to the presence of each of the proposed transcontinental routes, the first of which would not be completed until 1869. Myriad cities and towns throughout the country are labeled, including the state and territorial capitals and Washington, D.C. Innumerable rivers snake their way across the U.S., along with numerous mountains ranges. Both 'Canada East' (Quebec) and 'Canada West' (Ontario) are also labeled, along with New Brunswick, Nova Scotia, Prince Edward Island, and 'British America', or the rest of modern-day Canada. An inset map of Newfoundland is situated in the lower right corner. The whole is surrounded by Mitchell's distinctive flower border, common to Mitchell's atlases from 1860-1867.

This map was engraved by W. Williams and published by Samuel Augustus Mitchell, Jr. in the 1861 edition of his New General Atlas.


Wellington Williams (1814 - July 8, 1875) was an American engraver based in Germantown, Philadelphia. Williams was born in Bath, England. He emigrated to England as a young man, establishing himself in Philadelphia as a map and line engraver. He most notably engraved the maps for both Samuel Augustus Mitchell and his son, Samuel Augustus Mitchell Jr. There is some evidence that Williams resented the relationship and derived little profit from the success of two Mitchell atlases. He also engraved for William C. Woodbrid and D. Appleton. In addition, Williams also published several maps and views under his own imprint. His home was located at 1857 Mervine Street, 20th Ward, Philadelphia. His offices were located in Philadelphia, on 5th Street, below Chestnut. He was interred at the Laurel Hill Cemetery, Philadelphia. Learn More...

Very good. Light toning and transferrence along original centerfold. Blank on verso.
Looking for a high-resolution scan of this?