1863 Mitchell Map of the United States 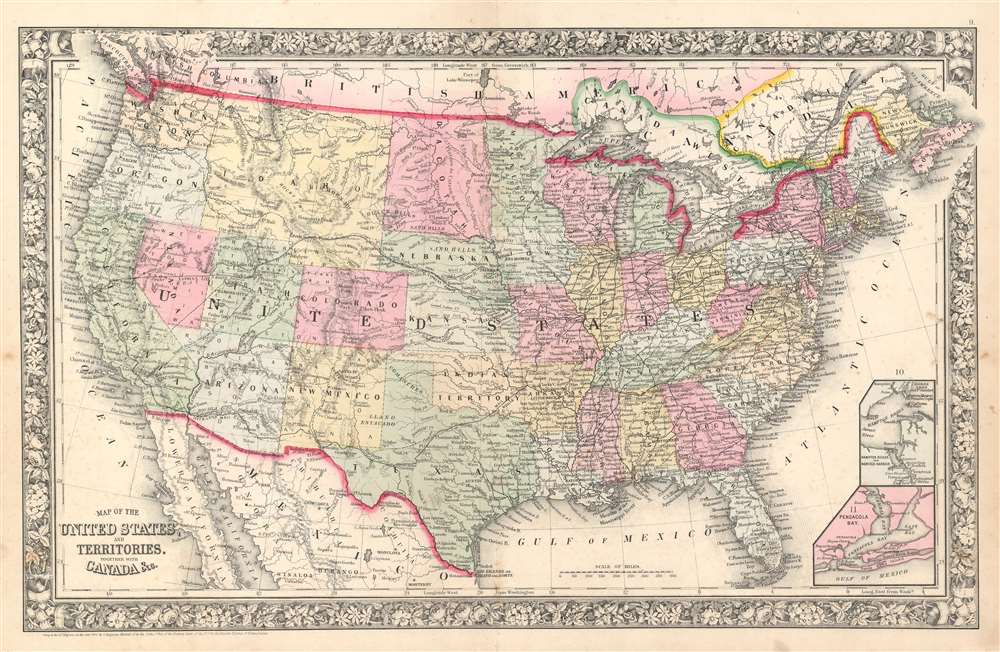 1863 Mitchell Map of the United States

An atlas map of the United States published at the height of the American Civil War.

This is an 1863 Samuel Augustus Mitchell, Jr. map of the United States. The map depicts the region from the Pacific Ocean to the Atlantic Ocean and Nova Scotia and from Canada to Mexico. An ephemeral configuration of the western states is illustrated here, with Washington State and Oregon occupying basically the same borders that they do today, but Idaho takes up the entirety of the modern-day state of Idaho as well as Montana and Wyoming. North and South Dakota have yet to be established, leaving that region to be simply named Dacotah. Arizona stretches out along the 36th parallel to the California border, cutting into a large portion of southern modern day Nevada, including Las Vegas.

Apart from the geographical differences between the borders of today's states and those of 1863, a wealth of other details are included here. Innumerable cities and towns are labeled, as are forts, lakes, rivers, and waterfalls. The railroad network in the eastern states is illustrated by solid black lines that had not yet reached out west. There, the famous Pony Express Route is identified, as is the Mail Route through Texas, New Mexico, and Arizona to California. Other trails, such as the Route to Santa Fe and the Wagon Road to Salt Lake from Southern California are also illustrated. Two inset maps situated in the lower right corner illustrate Hampton Roads and Pensacola Bay.

This map was created and published by Samuel Augustus Mitchell, Jr. for publication in the 1863 edition of his New General Atlas

Very good. Even overall toning. Light soiling. Wear along original centerfold. Verso repair to centerfold separation. Blank on verso.
Looking for a high-resolution scan of this?