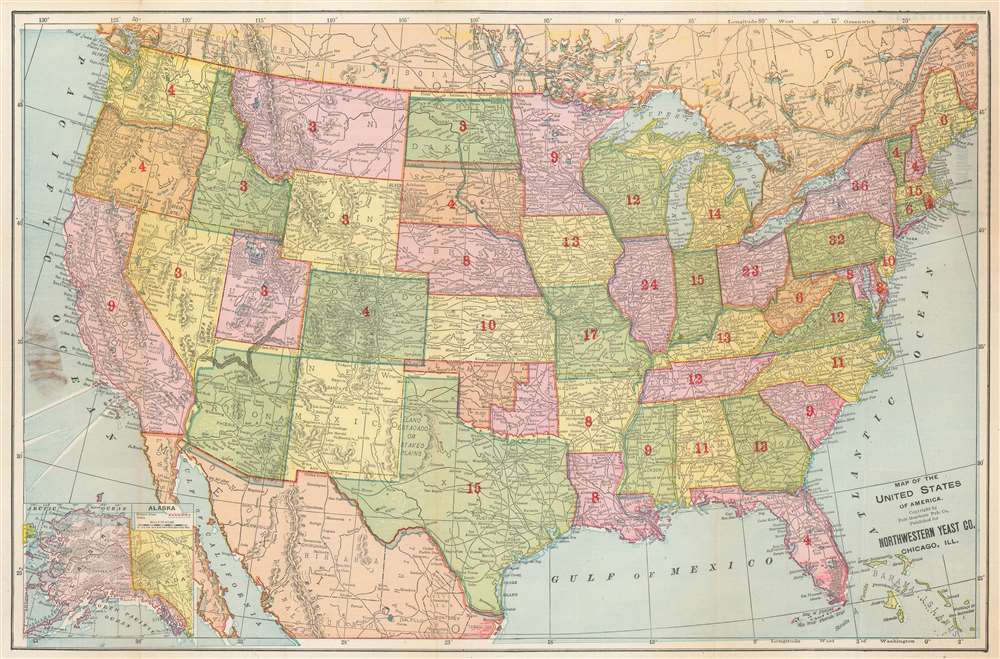 Red overprinted numbers announcing the size of each state's Congressional delegation provide an interesting look into the history of American representative government.

This is a rare c. 1899 Fort Dearborn Publishing Company and Northwestern Yeast Company map of the United States. States and territories are shaded different colors to allow for easy differentiation. The extensive rail network is illustrated, although is completely unlabeled.

Congressional Delegations and the Oklahoma and Indian Territories

This map is most notable for the red overprinted numbers in each state, which reverence the size of the Congressional delegation allotted to each state. This means that the number for New York, for example, is the total of its thirty-four Representatives and two Senators. Numbers are not printed in Arizona, New Mexico, Oklahoma, the Indian Territory, and Alaska, since these three states were still only territories in 1899.

The Northwestern Yeast Company was founded in Chicago in 1893 after Egbert W. Gillett, of the George A. Weiss Malting and Elevator Company, and John and Henry Boyle merged their firms. Gillett’s company sold ‘Magic Yeast’ while the Boyle’s firm sold their own brand, ‘Yeast Foam’. After the merger, the company retained both products, most likely in an effort to avoid antitrust litigation. Although the ultimate fate of the business is unknown, the company was sued by employees claiming to have not been paid overtime and also faced antitrust issues in the 1940s. By 1950, the factor was shuttered and sold.

This map was created by the Fort Dearborn Publishing Company and issued and distributed to various business to use as a kind of calling card. The present example was published on behalf of the Northwestern Yeast Company. There are no other known surviving examples.

The Fort Dearborn Publishing Company (fl. c. 1893 - 1905) was an American publishing firm based in Chicago, Illinois. The firm published atlases, books, cookbooks, and separate maps. John F. Waite served as the president from at the latest 1896 until at least 1903 and the firm operated out of 415 and 417 Dearborn Street in Chicago. Learn More...

Good. Light wear and toning along original fold lines. Area of soiling where previously attached to a binder. Some text on verso.
Looking for a high-resolution scan of this?