1812 Phillips Map of the United States w/ Franklinia and Morgania 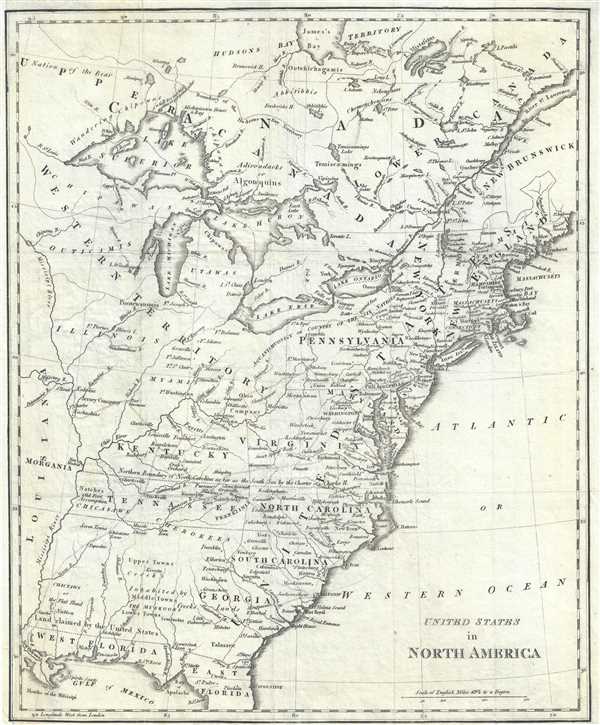 1812 Phillips Map of the United States w/ Franklinia and Morgania

Scarce map illustrating the proposed states of Franklinia and Morgania.

This is a fascinating 1812 Sir Richard Phillips map of the United States shortly after the American Revolutionary War as the new country was struggling to resolves issues of state vs federal sovereignty. It illustrates a time of endless possibility, where the ambitious could stake out their own settlements and build trade empires on loosly policed frontiers. This map, while not visually dramatic, includes two such colonies, Franklinia and Morgania.

The State of Franklinia was extra-legal proto-state located in what is today eastern Tennessee. Franklinia was offered to congress a new federal territory by North Carolina in partial payment of its Revolutionary War debt. It was initially assumed that Franklinia would become the fourteenth state of the United States and its capital, Jonesborough and a provisional government was set up in 1785. The new Franklinia government ran contentiously in parallel with the established North Carolina bureaucracy, neither recognizing the legitimacy of the other. The creation of Franklin is novel, in that it resulted from both a 'cession' (an offering from North Carolina to Congress) and a' secession' (seceding from North Carolina, when its offer to Congress was not acted upon and the original cession was rescinded). Franklinia was the brainchild of Arthur Campbell and John Sevier, who adopted the name Franklin to garner Benjamin Franklin's influential support in congress. Unfortunately for Franklinia, Franklin himself was in Europe at the time and was unwilling (and unable) to fully back the fledgling state. The North Carolina cession to the federal government had a stipulation that Congress would have to accept responsibility for the area within two years. Without significant congressional support, Franklinia was unable to secure the 2/3rds vote required by the Articles of Confederation to be admitted as a new state. By 1789, after considerable conflict, momentum for Franklina declined and it was instead folded into the new state of Tennessee.

Even more obscure is Morgania, appearing here just west of the Mississippi River in what is today Missouri. This is the failed colony of Colonel George Morgan (1743 – March 10, 1810), a Revolutionary War era officer and Indian Agent turned trader and land speculator. Following the war, Morgan was involved in several land schemes in the Ohio River Valley, Virginia (West Virginia), and in Illinois Country, all of which found themselves at odds with the fledgling state and federal governments. Meanwhile, on the opposite bank of the Mississippi, the Spanish began to recognize with concern the expansionist tendencies of the young nation. They developed a plan to lure American colonists to establish settlements west of the Mississippi on the stipulation that they commit their loyalty fully to the Spanish Crown. With the support of Spanish ambassador Don Diego de Gardoqui, Morgan jumped at the opportunity, accepting a provisional 15-million acre grant opposite the mouth of the Ohio River, between present-day Perry County, Missouri and the mouth of the St. Francis River in Arkansas. Along the banks of the Mississippi River he laid out the settlement of New Madrid on a grandiose grid. It was to be a utopian haven with an emphasis on fair trade relations, religious tolerance, and education. Despite high ambitions, Morgan's colony, Morgania, fell too afoul of greater political machinations. The traitor, James Wilkinson, described by Theodore Roosevelt as the most despicable character in American history, had his own plans for Transmississippi empire and wrote a letter condemning Morgan's character to the Spanish governor. The terms of Morgan's grant subsequently fell through. Morgan died in 1810 and his capitol at New Madrid was destroyed by a series of earthquakes in 1811 and 1812. Morgania itself appears on only a few maps issued between 1799 and 1809 and subsequently vanished from historical memory.

This map was first published in London in 1895 by Sir Richard Phillips to illustrate William Mavor's Mavor's History of the Discovery and Settlement...of North and South America.  The present example is the 3rd stateissued in 1812, wherein the title is chaged to 'United States in North America'.   It is today quite rare.

Dodson, E., and Baker, K, Carto-Bibliography of Engraved Maps Depicting the State of Franklin, 14b.3.
Looking for a high-resolution scan of this?